A reader asked if the yo-yo temperatures since last autumn are related to the Arctic Oscillation. Short answer, no.

For starters, the Arctic Oscillation Index is a way to describe (near) surface pressure patterns in the Northern Hemisphere at mid and high latitudes. However, as the plot below illustrates, the long term (1949-2012) correlation with surface temperatures in the cold season (Oct-Mar) are not very high over western North America and most of Alaska (the correlation is marginally significant over a small area over south-central Alaska).

For this past cold season, below is a plot of the daily AO index and the standardized daily mean temperature anomaly for Fairbanks (through April 13). As you can see, there was no patterning of the AO Index with how much above or below normal the temperature was in Fairbanks. Notice that the very cold weather in mid-November occurred with a somewhat positive AO, while the cold weather at the end of January occurred when the AO was at largest negative value of the whole winter. Similarly, the very mild weather in early December occurred with a strongly positive AO, while at the end of December the AO was again strongly positive but Fairbanks was considerably colder than normal. For the whole period (Oct 1-Apr 13), the correlation was functionally zero (0.02). 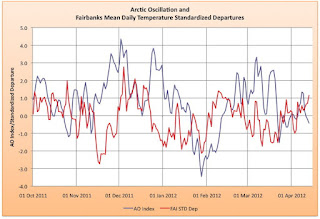