Returning to the subject of the unusual September snowfall in Fairbanks this year, I created a different kind of graphic to illustrate the fate of all early autumn snowfall events in Fairbanks since 1930.  The chart below plots all non-zero snow depth observations from September 1 through October 15 in Fairbanks, with snow depth on the vertical axis and date on the horizontal axis.  Red markers indicate snow that subsequently melted out before the arrival of the permanent snowpack, and blue markers denote snow that stayed.  The "x" markers show the observations from 1992 and 2015. 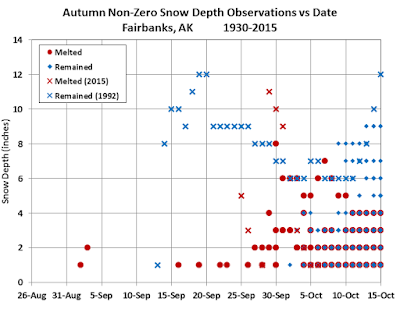 A few features stand out on the chart.  First, this year's snowfall, despite being very unusual, was clearly much less anomalous than the 1992 event, which produced 10" on September 15.  Second, there have been other instances when 5-8" of snow in the first week of October melted out, so in retrospect it isn't too surprising that 11" on September 29 couldn't survive.  The 1992 event was accompanied by incredible cold that was arguably even more unusual than the snow.  Excluding 1992, there are hardly any blue markers prior to October 5, so it's very rare to see the permanent snowpack before that date.

The chart also illustrates that a snow depth above 4" after October 10 is very likely to survive; it's tough to melt snow in mid-October, even with sunshine and above-normal temperatures.  The downtown Fairbanks webcam shows traces of snow on the roof of the Yukon Quest HQ today, 10 days after the airport lost its snowpack, and after some unusually warm conditions.  The Goldstream Creek COOP near Fairbanks was still reporting 4" of snow on the ground as of yesterday morning. 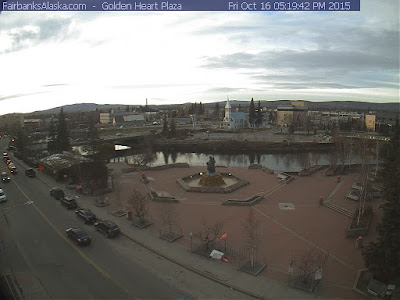 On another note, there is now plenty of ice on the Yukon River at Tanana, as a result of some cold nights, particularly farther upstream; the Beaver RAWS was down to 2°F on Tuesday.  Here's a loop of the FAA webcam view in Tanana for most of the day today.


Update October 17: at least part of the Yukon is frozen over today at Beaver. 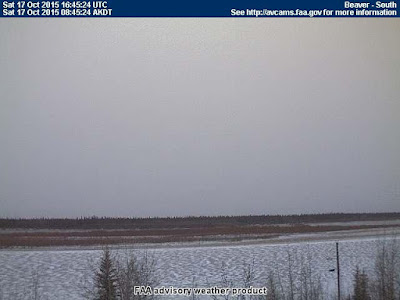