The negative half-century mark (-50°F) was measured for the first time this winter in Alaska today (to my knowledge); the "lucky" spot was the Kanuti Lake RAWS (elevation 524') in the Kanuti National Wildlife Refuge.  Kanuti Lake is about 40 miles southeast of Allakaket.  The hourly observations, shown below, did not actually hit -50°F, but after rounding to the nearest degree the minimum temperature would be reported as -50°F (and a slightly lower reading presumably occurred at an intermediate time).  Note the extreme rise in temperature between 10am and 11am AKST this morning, when the first stirring of a breeze apparently mixed out the (no doubt very shallow) surface-based inversion. 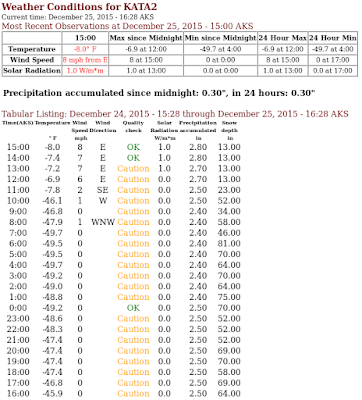 As far as I'm aware, the last time -50°F or lower was observed in Alaska was early last February.  The Sag River/Pump #3 site came close on December 4, with -49°F, and Kanuti Lake was almost as cold (-48°F) on December 10.  -50°F or colder is observed every winter somewhere in Alaska, although in some winters that is about as cold as it gets.

Here's a nice webcam photo from Arctic Village yesterday at solar noon, with the sun about 1° below the horizontal and some light ice fog evident near the ground.  The airport reported -45°F at the time. 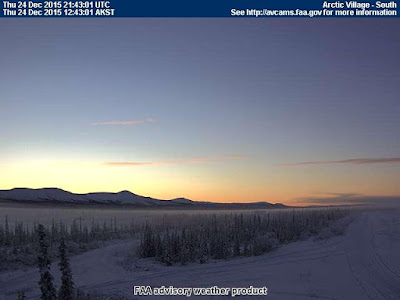