Back in 2012, before I took over as lead author on this blog, Rick Thoman penned a very nice essay about candidate locations for the coldest place in Alaska.  I've long been interested in his comment there that a short-lived co-operative observing site at O'Brien Creek in the Fortymile Country tended to be colder in winter than the famously cold settlement of Chicken.  After all this time I've taken a close look at the data, and I can confirm that indeed O'Brien Creek was (and presumably still is) slightly colder than Chicken in winter.  This would give it the coldest observed winter climate in interior Alaska.

The O'Brien Creek co-operative observers (Larry and June Taylor, to whom we owe a debt of gratitude!) recorded the weather at their place of residence from May 2001 through August 2010, giving us 9 winters of mostly complete climate data.  There are some missing days or periods here and there, but overall the November-March data is 94% complete for this period; this is about the same as for Chicken.

Looking at all dates for which data is available from both O'Brien Creek and Chicken, we find that the November-March mean temperature was 0.5°F colder at O'Brien Creek; so overall it is a very small difference, and not statistically significant.  However, the differences are larger in late winter and are strongly significant for both February and March.  The chart below shows the mean daily maximum and minimum temperatures by month for the overlapping period of record; we see that differences are very small in November through January, but O'Brien Creek is colder in February and has lower minimum temperatures in March. 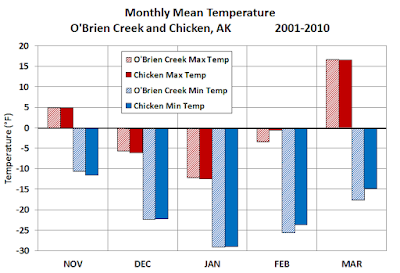 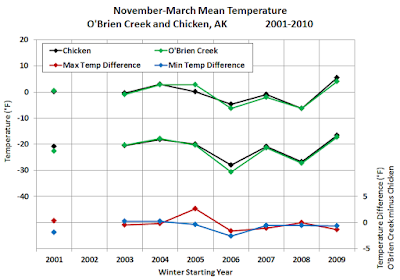 It's interesting to look at the absolute minimum and maximum temperatures observed at the two locations during the period of overlapping data; see below.  As before, the green and black lines show the comparison for maximum and minimum temperatures, and the red and blue lines show the differences.  For November through January there are no obvious systematic differences, but from mid-February through March the extremes become relatively colder at O'Brien Creek for both maximum and minimum temperature.  So for example O'Brien Creek recorded -61°F on March 3, 2007, and -51°F on March 15, 2009, whereas the latest dates for -60°F and -50°F at Chicken are February 24 and March 4, respectively - and that's using the entire period of record at Chicken, which is now almost 20 years. 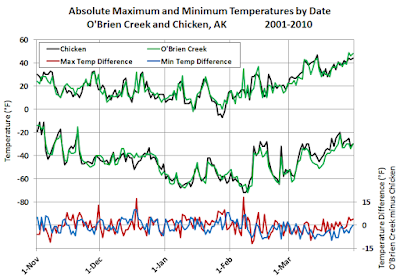 The tendency for cold late winter conditions at O'Brien Creek seems very likely to be a direct result of the steep nearby topography, which maintains long hours of shadow over the valley until well into spring.  The topographic map below shows the situation, with terrain rising up steeply in most directions, and the photo below (courtesy of Rick Thoman) further illustrates the nature of the surroundings.  The deep valley may also help shelter the valley floor from prevailing wind patterns, creating more frequent calm conditions. 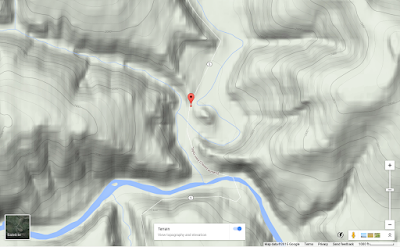 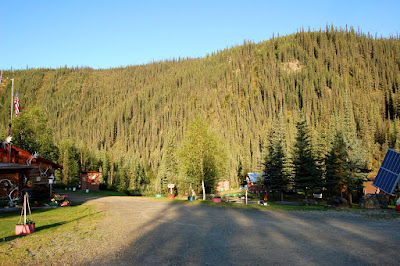 The topographic map for Chicken (below, on a somewhat expanded scale) shows much less terrain variation in the vicinity of the station, and therefore it seems likely that both solar and wind-induced warming would have more of an effect on Chicken in late winter.  As cold as Chicken is, then, it is not ideally situated for cold, as the deeper valleys of the Fortymile Country are capable of producing even colder winters on average. 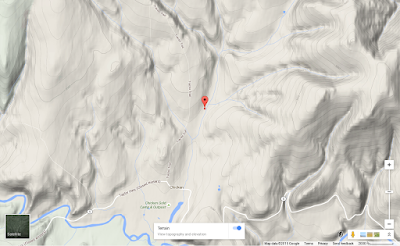