It's been almost two years now since media discussion in the U.S. latched onto the idea of the "polar vortex" as a means of explaining the unusual cold that affected parts of the lower 48, while Alaska was - as usual - experiencing the opposite temperature anomalies.  Google's search history shows the spike in interest in the term "polar vortex" in early January 2014.

From a scientific perspective, the discussion in 2014 was misplaced, as the real polar vortex is a phenomenon in the stratosphere that most certainly did not migrate southward into the upper Midwest; it seems the term was used to refer loosely to the southward displacement of cold air that often resides over northern Canada in winter in association with a cyclonic circulation in the troposphere.

The behavior of the real stratospheric polar vortex is actually much more interesting this winter, as the vortex is currently very intense - more so than ever previously observed at this time of year in the era of balloon observations back to 1948.  Using an index of 10mb westerly wind speed from 50°N to 80°N, the average strength of the circulation since November 1 is more than 10% higher than in any previous year during this period (see the chart below).  The polar vortex is a wintertime phenomenon, and according to the long-term normal, the 10mb wind speed in this latitude band usually peaks at just over 30 m/s in early January.  However, this year the average since November 1 is over 39 m/s, and the wind speed reached 45 m/s on December 5, which was the earliest on record for such a strong circulation.  (As an aside, the apparent long-term upward trend in the chart is more than a little interesting, although the data from the early years might be questionable, as 10mb observations were pretty thin back then.) 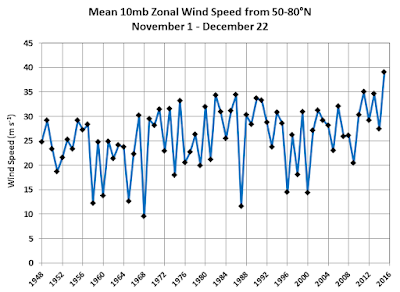 What does this mean for weather patterns down here at the surface?  The strength of the stratospheric polar vortex is correlated with the Arctic Oscillation, which is a measure of the pressure gradient between middle and high latitudes, and of course this makes sense: we would expect a strong cyclonic circulation aloft to occur in tandem with a strong westerly flow at low levels.  The magnitude of the correlation is not particularly strong, but nevertheless this year's tropospheric conditions bear out the relationship, as the AO has been significantly positive on average since the beginning of November.  The 500mb height anomaly since November 1 (see below) shows lower than normal heights (pressure) from far eastern Russia to Greenland and the northern North Atlantic area.  Unusual ridging over eastern North America and Europe has brought extremely unusual warmth, with many locations undoubtedly seeing their warmest December on record.

The map below shows the characteristic 500mb height pattern during 10 previous years in which the polar vortex was unusually strong in November and December.  The locations of the ridges over eastern North America and Europe are quite similar to what has occurred this year, which suggests that the recent weather anomalies are probably closely connected to the polar vortex strength.  In this sense, then, the media could be justified in blaming the excessive warmth on the polar vortex this winter; but I doubt they'll pick up that story. 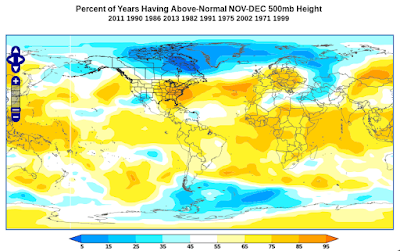 The relationship between Alaska's weather and the polar vortex strength is not as clear, and more investigation might be worthwhile.  However, I'll point out that low pressure in the Arctic basin, and a positive AO phase, are somewhat favorable for enhanced snowfall in Fairbanks, because lower pressure to the north favors a more westerly flow regime.  The chart below shows that November-January snowfall is rarely low when the AO is significantly positive, and conversely a strongly negative AO greatly increases the odds of below-normal snowfall.  With this in mind, I think we can place part of the blame for interior Alaska's snowy November on the strongly positive AO phase, although the details of the snowy weather were more closely tied to the pressure pattern in the North Pacific-Bering Sea-Alaska sector, and this is only partly related to the larger-scale AO phenomenon.  With December so far being almost snowless in Fairbanks and Bettles, the AO phase is obviously only a small part of the story. 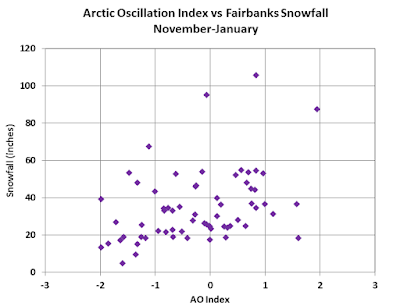