Fairbanks has reached 40°F or higher on each of the last 4 days, which is pretty remarkable for the time of year.  Only February 1942 had a higher number of 40+ degree days (6 of the last 7 days of that month).  In the long-term history since 1930, the highest temperature normally observed in December through February turns out to be 40°F, so half of all winters never get out of the 30s during the 3 coldest months (and a few do not get out of the 20s).

Unusual warmth has been a persistent feature of Alaska's weather for over two and a half years now, ever since the dramatic flip in 2013 from a very cold spring to an extremely warm June.  (Check out this blog's archives for the commentary at the time.)  Interestingly if we look at the Alaska climate division data that became available last year, that first warmth month (June 2013) was one of the most anomalous months in the warm spell, as the statewide (13-division) average of the standardized monthly temperature anomalies was +1.96 standard deviations.  This compares to +1.94 SD in October 2013, +1.88 SD in January 2014, and +1.96 SD in May 2015.  For comparison, January of this year came in at +1.71 SD relative to the 1981-2010 normals.  (Note that this is a simple average; the land areas of the divisions are not equal.)

The chart below shows the long-term history of the statewide average standardized anomaly, with a 12-month running mean applied (1981-2010 normal used throughout).  It's interesting to note that the current warm spell appears comparable to the warm period that extended from late 2002 through 2005; so far, Alaska's latest warm spell is not warmer than that previous period on a 12-month average basis.  This is confirmed by looking at 12-month running means of the statewide area-average temperature in the same climate division data: the 12 months ending August 2003 had a mean temperature of 30.95F, and the 12 months ending January 2016 had a mean temperature of 30.93F.  (However, the 12 months ending in February 2016 will presumably be warmer.) 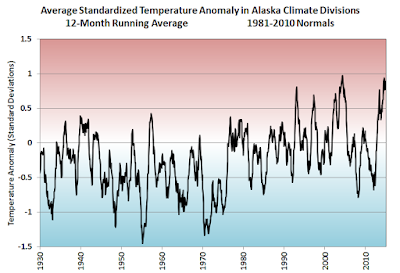 If we look at only winter months, we get a rather different picture, as previous warm spells did not produce back-to-back winters with such anomalous warmth.  (This winter's data is complete only through January, but we know February will be very warm, and March seems unlikely to be very cold.)  The most comparable event in the past may be the back-to-back warm winters of 1943-44 and 1944-45. 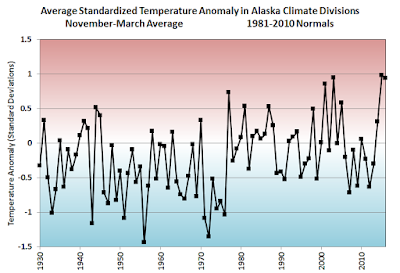 We can get a different perspective on the extent of the warmth across the state by looking at the fraction of the 13 divisions that had temperatures in each of the 3 climatological terciles (above-normal, near-normal, and below-normal).  After doing this calculation for each month, and again applying a 12-month running mean, we get the chart below: 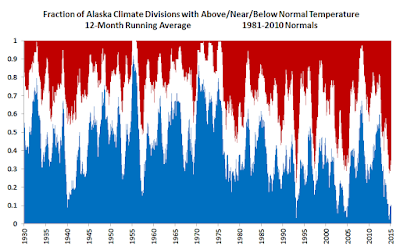 Again we see that the current warm spell looks rather comparable to that of 2002-2005.  There were a couple of other periods (1993 and 1997-98) that showed similarly widespread warmth, but for shorter periods.

Here's the chart for just the winter averages of the monthly tercile frequencies.  The absence of any significant cold in the past two winters is remarkable; only one climate division (North Slope) was colder than normal for only one month in December 2015. 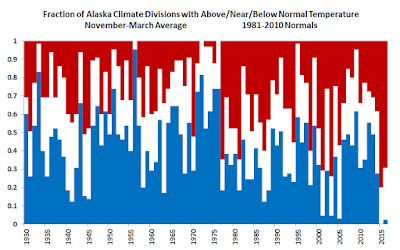