Fairbanks airport managed to drop to -21°F yesterday morning, which was 9°F below normal for the date and just inside the "below-normal" category (lower tercile) for daily minimum temperatures.  The noteworthy aspect of this is that it's only the second time that -20°F has been reached this year so far.  In the history since 1930, only 1977 started off with so few -20°F days in January and February.  It seems unlikely that Fairbanks will see any more such days this month, as the forecast is very warm indeed.

The profound lack of cold reflects the extremely low variance of temperature thus far, as we discussed before.  As of yesterday, the year-to-date standard deviation of daily mean temperature anomalies is the lowest on record at only 8.5°F and barely over half the usual value of 16.4°F.  For context, the 1981-2010 normal standard deviation for this time of year is close to 8.5°F in Valdez and also down in my neck of the woods in Athens, GA.

Fairbanks is also tying 2010's record pace for driest start to the year, with only 0.06" of liquid-equivalent precipitation thus far.  So with the combination of non-variable temperatures and lack of precipitation, this might be considered the most boring start to the weather year ever in Fairbanks. 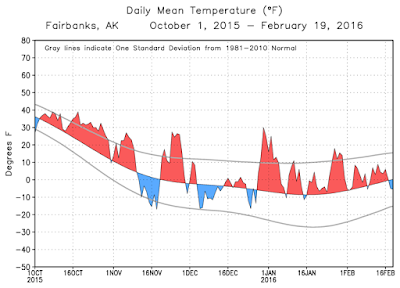