As a follow-up to my recent post about Barrow's remarkable drop in temperature variance, I thought it would be useful to look at a map of variance changes to see how widespread the phenomenon has been.  Has the annual mean temperature become much more stable in recent years over most of the Arctic or even farther afield?  Or is it a localized change near Barrow?  Using the 2m temperature data from the NCEP/NCAR reanalysis, here's the answer (click to enlarge): 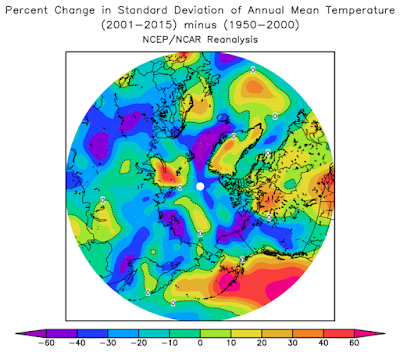 According to reanalysis data, Barrow's reduction in temperature variance is not representative of the Arctic region as a whole, as strongly contrasting changes have occurred from place to place.  However, neither is Barrow's change a hyper-local phenomenon; there is a zone of much diminished variance that extends east along the south coast of the Beaufort Sea.  Looking farther afield, there are regions of strongly decreased variance near Russia's New Siberian Islands and in the Greenland Sea, but variance has increased strongly over the Kara Sea (and the North Pacific!).  It seems likely that at least some of the changes in the Arctic are related to the pronounced sea ice extent changes of recent years.  It's not as simple as saying that variance has decreased because ice cover is reduced, but it is notable that much more of the Arctic has seen reduced variance than increased variance.

The "before" and "after" periods in this comparison look quite different - see below.  The zone of low variance from eastern Alaska through the Arctic to the North Atlantic is rather striking in the analysis for the past 15 years. 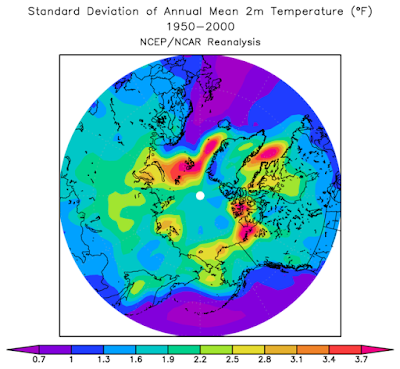 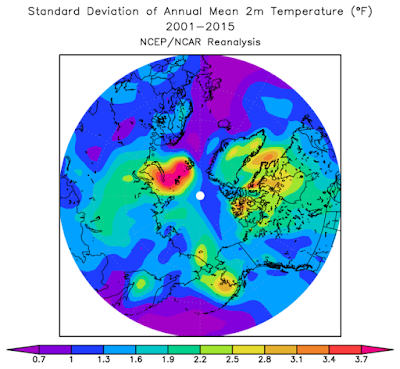 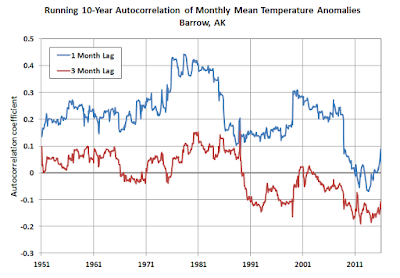 The chart below shows the results for lags of 6, 9, and 12 months.  The lag-6 autocorrelation has recently decreased to a statistically significant -0.18, so temperature anomalies are tending to cancel each other out at opposite ends of the year.  This is consistent with the overall decrease in annual variance, but the fundamental reason for the change is not yet clear. 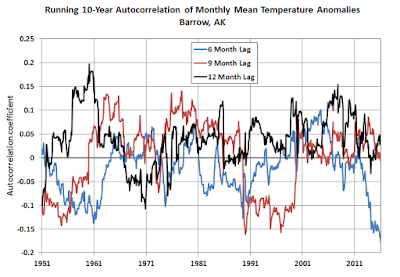 To conclude for today, here is a chart of annual mean temperatures and running variance at Cold Bay, where the reanalysis suggests that variance has increased in recent years.  The observed temperatures from Cold Bay confirm that variance has increased, and in this case the cause is clear: the North Pacific temperatures have fluctuated widely as the PDO phase has undergone dramatic shifts from year to year.  The extraordinary warmth of the last 3 years in Cold Bay has been particularly unusual in light of the long-term history. 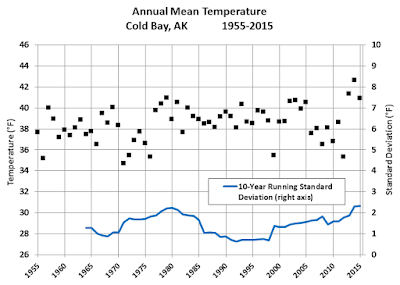