Yesterday's hot weather was interrupted in the middle of the afternoon at Fairbanks airport by a quick thunderstorm that dropped almost half an inch of rain.  It was a small and short-lived pulse-type storm, but it happened to occur right around the time of the balloon sounding release, and there were some fortuitous and interesting observations as a result.

The zoomed-in radar image below shows the storm when it was most intense, at about 2:45pm AKDT (click to enlarge).  The red dot and marker indicate the approximate midpoint of the airport; note that the ASOS is located farther southwest, near the southwest end of the airport, and right under the path of the storm as it moved from west to east.  However, the balloon launching site is located near the western perimeter road, to the left of the marker, and on the north side of the storm.  The ASOS reported 0.42" of rain from the storm, while the upper air site measured only 0.10".  I've included below a map that Brian made a couple of years ago showing the locations of the two observing sites. 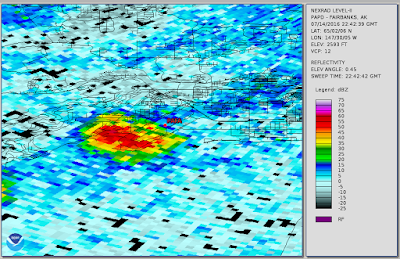 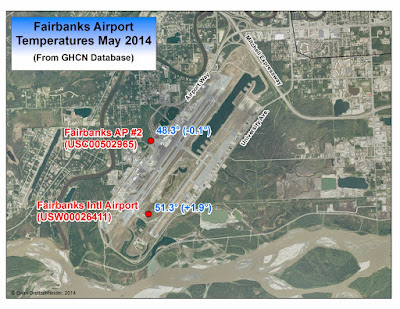 The simple animation below shows the brief life span of the storm; it moved right over the southwest end of the airport and Fairbanks' official climate site, but just grazed the upper air site.

Now take a look at the sounding from the balloon that was released at 3:03pm, which was just when the storm was moving out and decaying.  Rain-cooled air is evident at the surface, with a temperature of only 69°F, but a very high dewpoint of 66°F.  This is actually the highest dewpoint ever measured at the surface in a Fairbanks sounding (a marginally higher dewpoint was measured in June 2002 just above the surface).

Above the surface we see that the air was much warmer and very much drier, with the temperature rising to 83°F only 35m above the ground.  Clearly the air just above the surface was undisturbed by rainfall; it represents the ambient environment in which the storm formed.  I conclude that the rain had already ceased at the upper air site, and warm dry air had moved back in aloft from the immediate surroundings, but rain-cooled air was still in place at the sheltered sounding release site (which is surrounded by trees).

The 14°F inversion between the surface and 35m aloft is a remarkable occurrence, because it's rare to see any inversion in the Fairbanks sounding at the afternoon observation time in summer.  The sun-warmed surface is nearly always the warmest level in the troposphere, and less than 5% of afternoon soundings have an inversion in June and July.  (This post from 2 years ago showed the typical morning and evening temperature profiles through the year.)  Amazingly, yesterday's inversion was the strongest ever observed at any afternoon sounding from April through September.  Obviously it was a very unusual set of circumstances that produced such a shallow layer of cool air at the surface, and it happened at exactly the right time to be measured by the sounding.  It also didn't last long, because the ASOS temperature was back up to 84°F by 4pm and 88°F by 5pm.  Remarkably, the Fairbanks ASOS reached 88°F twice in one day, with a temporary dip down to 73°F during the brief heavy rain.

Email ThisBlogThis!Share to TwitterShare to FacebookShare to Pinterest
Labels: Thunderstorm