Abnormally cold conditions have returned to interior Alaska again, with widespread -40s at night in the past week or so, and a few -50°F readings.  The Salcha RAWS hit -51°F last night and has fallen below -40°F every day this month except one.  Here's a sample of the locations that dropped below -40° last night: 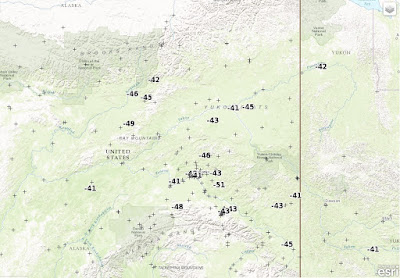 In Fairbanks the minimum temperature of -39°F this morning is the coldest observed so late in the season since 1964, although -37°F was seen on March 15 only 2 years ago.  Assuming today's high temperature is 0°F or less, which appears likely, this will go down as the coldest day of the winter in terms of standard deviations below normal.  But of course the contrast between today and the January 17-19 cold snap is like night and day: the number of hours of sunshine has doubled since then. 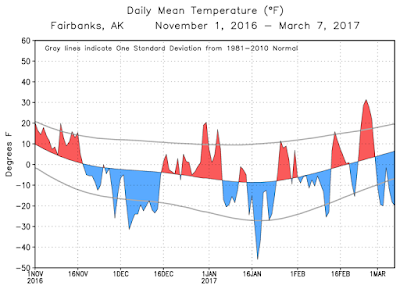