The sun is shining for long hours in central Alaska now, but temperatures have remained decidedly wintry of late.  This morning the thermometer registered -25°F at Fairbanks airport, which is where it has been on average for the first 18 days of the month (for overnight lows).  The overall mean temperature so far this month is 17°F below normal.

The 500mb height anomaly map for March 1-16 reveals the pattern that we would expect to find in association with unusual cold in much of Alaska: a big ridge over the Bering Sea and relatively low heights over Southeast Alaska.

The sea-level pressure map (below) shows the surface-level ridge extending across the interior into western Canada, providing the clear sky conditions that are conducive to enhanced overnight cooling.  The ridge has also shut off the moist westerly flow and brought an end to the snowy pattern.

It's interesting to examine the subtle contrast between this month's pressure pattern and that of November through February, see below.  For most of the winter the ridge was centered farther to the south, and the Arctic trough extended down to the Chukchi Sea, so the flow into Alaska was both wetter and warmer (relative to normal).

The map below shows the average MSLP pattern during 10 strong La Niña winters; notice the strong similarity to this winter's pattern.  This is somewhat remarkable to me, because this winter's La Niña episode was very weak in intensity - and yet the circulation pattern over the Aleutians strongly resembled a classical La Niña pattern.  This seems unlikely to be a coincidence, and La Niña probably bears some of the blame for the current cold as well. 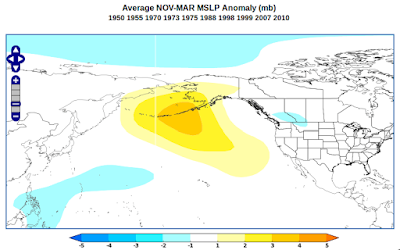 For completeness, the maps below show the typical El Niño pattern and the MSLP anomaly from last winter (2015-2016). 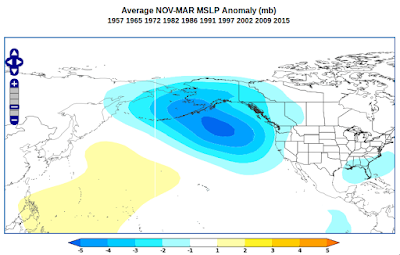