Break-up season is about to get under way across interior Alaska, as seen in the following map from NOAA's Alaska-Pacific River Forecast Center; there is considerable open water on the upper reaches of the Tanana River, and the lower Chena River appears to be mostly open too.  This is supported by a webcam image from Fairbanks showing water pooling on or flowing over the ice.  The ice at Nenana is also deteriorating. 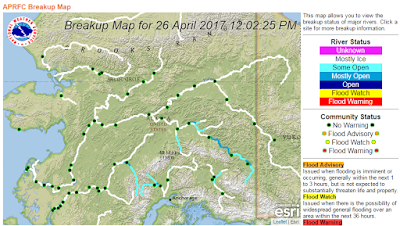 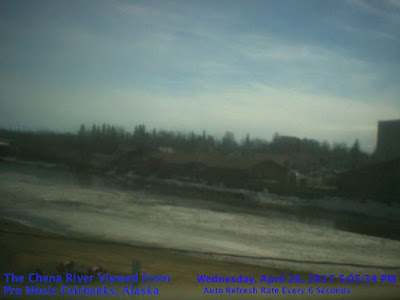 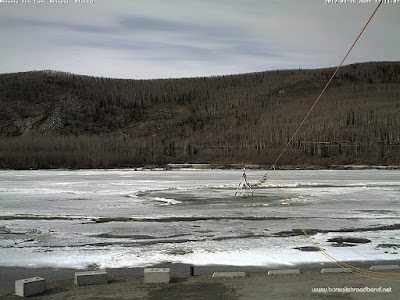 It is well known that break-up at Nenana has tended to occur earlier in recent decades, and of course this is directly related to the long-term warming trend.  Warmer spring weather has also caused trees to leaf out somewhat earlier in Fairbanks; we know this because the annual dates of "green-up" have been recorded since 1974 by visual observation of the east-facing slopes of Chena Ridge.  The chart below shows the green-up data along with the April-May mean temperature from Fairbanks airport.  Note that the high degree of variance prevents the trends from being statistically significant despite last year having the earliest green-up and warmest April-May period on record. 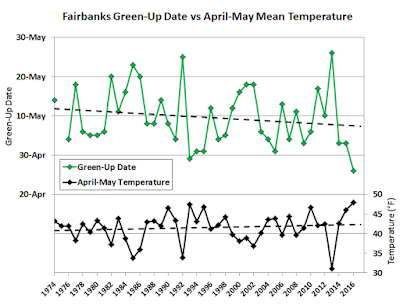 The chart below shows a corresponding analysis for break-up at Nenana, except that here I've plotted the April-May mean temperature for the Southeast Interior climate division (which shows a slightly higher correlation with break-up than temperatures in Fairbanks).  In this case the trends are marginally significant over this period of 43 years. 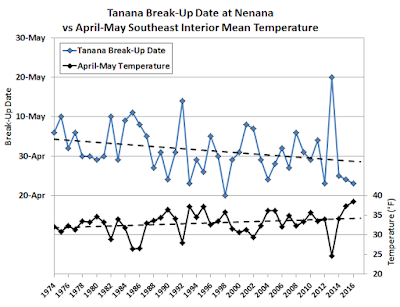 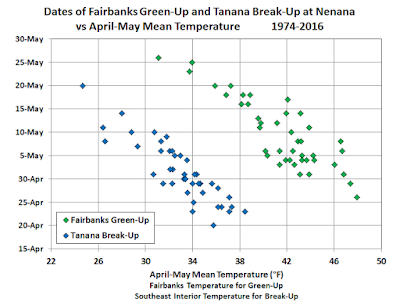 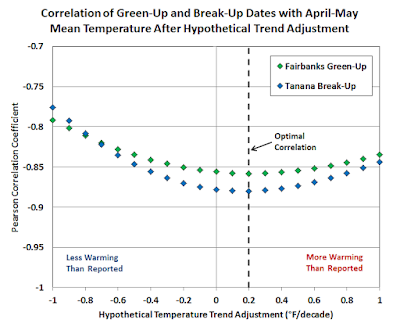 The result of the analysis is rather fascinating: for both Fairbanks green-up dates and Nenana break-up dates, the correlation with temperature is optimized when the reported warming trend is increased by 0.2°F/decade.  This reflects a change from +0.4 to +0.6 °F/decade in Fairbanks April-May temperatures and from +0.6 to +0.8 °F/decade in the Southeast Interior climate division.  This appears to suggest that the actual rate of warming, which is reflected in the dates of green-up and break-up, has been higher than reported by the thermometers at this time of year.

I'll look at break-up dates from some other rivers around Alaska in a subsequent post.  For now, I'd welcome comment from readers on the idea I'm proposing here: that physical date markers with long-term histories can be used to infer true temperature trends and thereby test whether historical weather data is adequately measuring the changes that have actually occurred.