I'll be traveling for the next few days, but some readers may be interested in a quick glance at some results I found recently with regard to sub-seasonal temperature forecasts for Fairbanks.  Sub-seasonal forecasts are made about 2 to 6 weeks in advance and therefore deal with prediction time scales in between more traditional medium-range weather forecasts (~5-10 days ahead) and seasonal forecasts (a month or more in advance).

Sub-seasonal forecasting has long been regarded as a very challenging problem, but increasing demand is driving research and investment in this area; the National Academy of Sciences published a report last year on strategies for research into improving sub-seasonal and seasonal forecasts.  I'll be giving a talk in Anchorage on May 2 at the Climate Prediction Applications Science Workshop; hence the new research reported here.

The result that's interesting to me is illustrated in the chart below, which shows a simple measure of performance (R-squared correlation) for forecasts of weekly mean temperature anomaly (departure from normal) in Fairbanks for week 2 (days 8-14 mean), week 3 (days 15-21 mean), and week 4 (days 22-28 mean).  I've taken the ensemble mean of forecasts from the U.S. CFSv2 model and the European (ECMWF) model, and then used a simple mean of the two models.  Generally the ECMWF model is superior to the CFSv2, but the average of the two models is better than either model by itself. 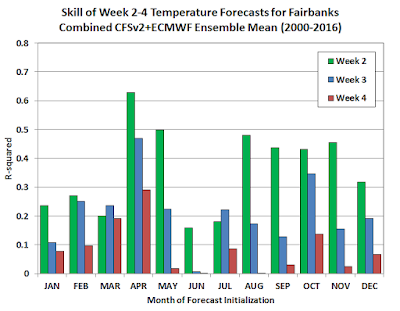 It's interesting and intriguing to see that the forecast performance is considerably better in spring and autumn than in winter; I would not have expected this, because large-scale flow anomalies are largest in winter, and I would expect predictability to be higher as well.  It seems possible that unusual boundary condition forcing (i.e. sea surface temperature and snow/ice cover anomalies - which are a key source of model skill) have greater influence in spring and autumn relative to the magnitude of random/chaotic variations in the flow.  It's also possible that the near-permanent surface-based temperature inversion in winter in Fairbanks makes long-range forecasts particularly difficult in that season.

The best month of the year for sub-seasonal temperature forecasts in Fairbanks is April, and especially at weeks 3 and 4 relative to other times of the year.  I'm quite impressed, actually, that forecasts issued in April capture nearly 50% of the variance at week 3 and almost 30% of the variance at week 4.  The skill is nowhere close to this for most of the rest of the year, although October is also fairly good at week 3.

So what are the current forecasts showing?  As of yesterday morning, when Thursday's extended-range ECMWF forecast came out, the multi-model ensemble is showing warmer than normal conditions persisting into the second week of April, and there is a suggestion of ongoing warmth over southern and western Alaska into weeks 3 and 4, but the signal is not particularly amplified. 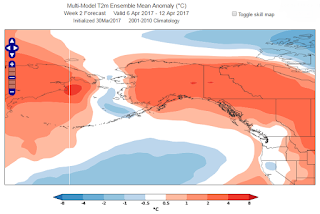 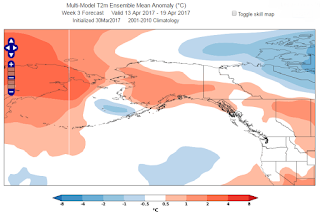 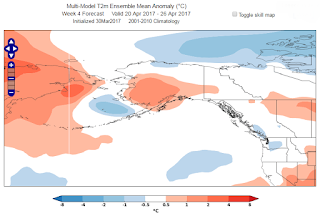 A warm outlook is consistent with the CPC's forecast for April - see below - but given the very warm start to the month, it would be surprising to see anything else in the one-month forecast.