It's been more than two months since my last update on basin-wide Arctic warmth, but not much has changed; even the remarkable cold spell in Arctic Canada in early March didn't put a dent in the overall high-latitude temperature anomaly.  According to the mean temperature from my set of 19 long-term surface observing sites, both February and March were more than 4°C warmer than the 1981-2010 normal.  The coolest of the last 6 months relative to normal was December, at "only" 3.4°C above normal.

This winter's November-March average temperature was the highest since at least 1971 for the 19 stations, as shown in the chart below.  Remarkably, Vize Island (on the northern side of the Kara Sea) was more than 10°C above normal for the 5-month average.  To get a sense of how enormous this anomaly is, consider that 10°C is greater than the difference between the record coldest and record warmest November-March periods in Fairbanks. 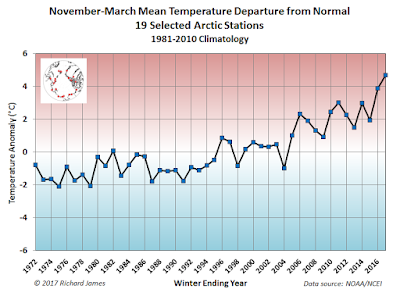 If we look at the temperature in terms of standard deviations away from normal, the warmth really hasn't taken a break since the remarkable events of January 2016.  Monthly mean temperatures now seem to be remaining near levels that were very unusual only a few years ago. 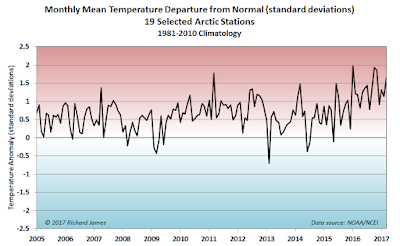 Not surprisingly, March average Arctic sea ice extent was the lowest in the satellite era according to the NSIDC, and estimated sea ice volume is also well below previous records. 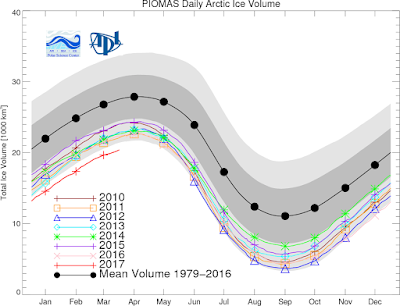 Interestingly, however, the Danish Meteorological Institute estimates that the Greenland ice sheet has gained considerably more mass than usual so far this cold season.  This was probably caused by the unusual North Atlantic circulation pattern, as low pressure and storminess have been more dominant than usual near southern Greenland. 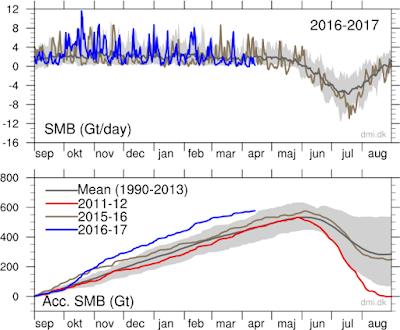 Posted by Richard James at 5:21 PM