In yesterday's post on lightning over the Beaufort Sea I somehow neglected to look at the satellite imagery to confirm the presence of deep convective storms in the region where lightning was reported.  I realized this oversight when Rick Thoman sent me an image last night - thanks Rick!  After digging around on the UAF Geographic Information Network of Alaska (GINA) website, I found several images that clearly show the evolution of the thunderstorms.

Here's a particularly nice photo showing a curved line of storms in approximately the center of the image; the shadow of the deep cumulonimbus clouds is evident to the north of the line (the sun's position is in the southeast at the time of this shot).  For reference, Point Barrow is visible in the center left of the image, and Banks Island is towards the upper right. 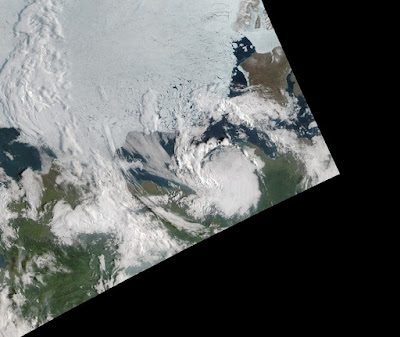 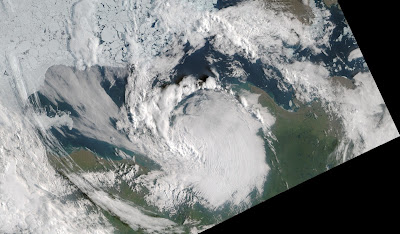 In the image sequence below I've paired up a selection of satellite views with the lightning reports from approximately the same time, running from about 2am to 1pm AKST on Monday; the lightning strikes clearly correspond to the brightest (deepest and therefore most reflective) storm clouds.

Posted by Richard James at 8:04 AM