Unseasonably cold conditions are hanging on in Fairbanks-land, with temperatures around 10-20°F below normal for the time of year, but some really exceptional warmth occurred yesterday in Russia's Chukotka district, on the other side of the Bering Strait.  Temperatures rose above freezing in a zone stretching from the northern Sea of Okhotsk and the Kamchatka Peninsula up to the Arctic Ocean, and the town of Ostrovnoe at 68°N saw a high of 42°F.

The location of Ostrovnoe (see the map below) means that it is usually a very cold location in winter; it's in northeastern Siberia, above the Arctic Circle, 100 miles south of the Arctic Ocean, and in a river valley.  The normal high temperature in January is well below -20°F and so it's considerably colder than any inhabited place in Alaska.  According to my calculations, yesterday's high temperature was 64°F above the 1981-2010 normal, and the low temperature of 33°F was a remarkable 69°F above normal.  The GHCN daily data from 1936-present (which is a bit patchy in some years) indicates that this is the first time Ostrovnoe has seen a daily minimum above freezing in January or February. 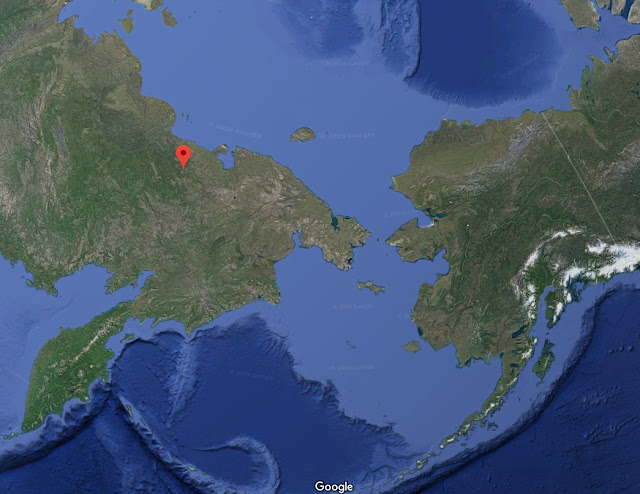 To put these daily anomalies in context, the largest positive daily temperature anomalies on record in Fairbanks are just over 50°F (for example, a high of 52°F on January 16, 2009, compared to normal of about 0°F). 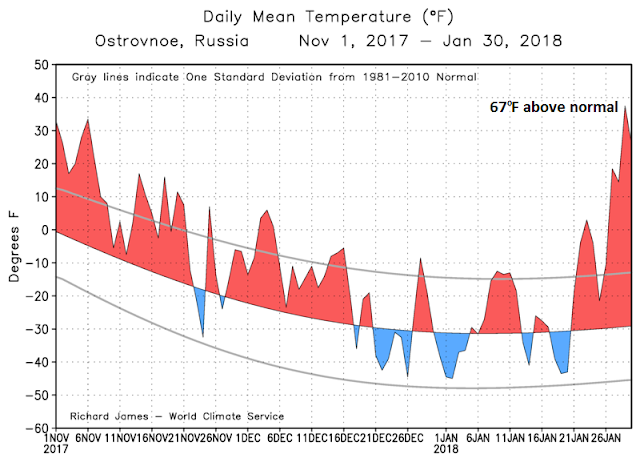 The profound temperature gradient across the Bering Sea is being caused by an intense ridge of high pressure centered right over the date line - see this morning's 500mb height analysis below.  Powerful southerly flow to the west of the ridge is pulling warm air up into eastern Siberia and the high Arctic, but northerly flow is keeping Alaska rather cold. The map below shows the average 500mb height anomaly in January and February, for 10 winters with strong La Niña conditions; a Bering Sea ridge is one of the main elements of the mid-high latitude atmospheric response to La Niña.  Although the current La Niña episode is not particularly strong, the current flow anomaly clearly fits the pattern rather well. 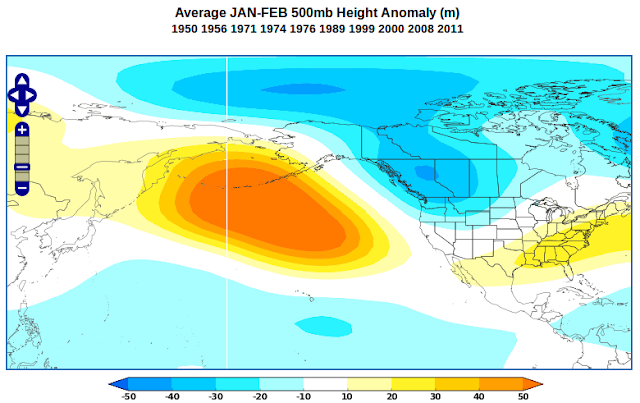