[Update 5am Jan 26:  Snow ended before 2pm yesterday in Fairbanks; one more hour would have tied the record for most hours of snow in a 7-day period.  As for consecutive hours with snow, this ended at 69 hours - nowhere near a record, although 45 hours of snow with temperatures below -20°F does tie a record from 1999 (thanks to Brian Brettschneider for that one).]

Very cold air associated with the upper-level low over the western interior has spread east in the past 36 hours, and as a result temperatures have dropped markedly in the Fairbanks area despite plentiful cloud cover and continuous light snow.  Normally the higher elevations in the hills provide some refuge from the valley-level cold, but this morning's sounding shows no low-level temperature inversion; however, there's a very deep inversion extending up to 700mb, and this is more characteristic of a true Arctic air mass.

Here are the minimum temperatures (°F) at the surface from the last 24 hours; colder conditions occurred just to the west of Fairbanks where the sky cleared out for a time yesterday. 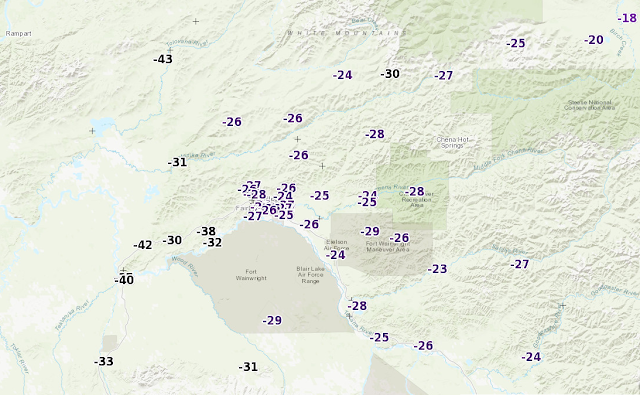 Also of note is the persistence of the light snowfall in Fairbanks in recent days, caused by the lingering zone of ascent aloft to the east of the upper-level low.  As of the latest hour (6am AKST), snow has been falling continuously for 61 hours.  This is nowhere close to the record from late December 1984, when snow was reported every hour for 5 and a half days (133 hours).

However, if we look at the number of hours of snow in the past 7 days, we are getting close to a record: starting last Friday, there have only been 13 observations at the top of the hour that did not report snow falling - it has been snowing for more than 90% of the time in the past 6+ days.  Based on data since 1950, the lowest number of no-snow hours in a period of 7 calendar days (midnight to midnight) is 22 (in January 1996), so this record will be broken if Fairbanks gets another 9 hours of snow before midnight tonight.

For reference, here's this morning's 500mb analysis.  It's interesting to note the very cold air aloft to the east of the low; the temperature of -41°C at 500mb above Fairbanks is accompanied by wind from the south-southeast. 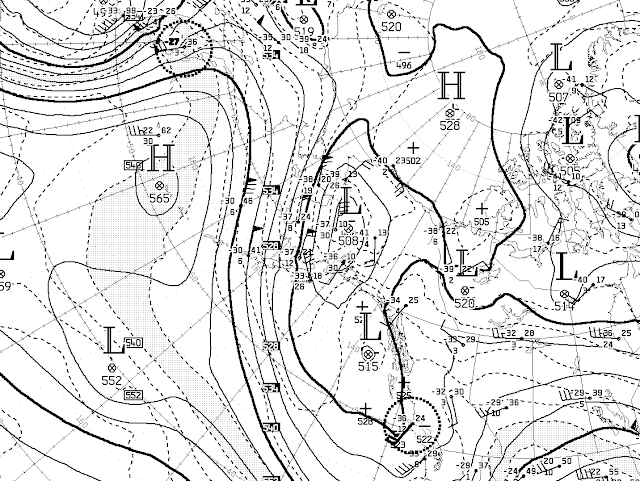 Posted by Richard James at 6:41 AM