As in my last post, I want to focus on the very unusual winds that have occurred in conjunction with the recent repetitive storms.  Remarkably, the peak 2-minute wind speed at Fairbanks airport reached 20 mph or higher on 9 out of 15 days in the latter part of February, and this is easily a record for any time in the winter, including March (based on data since 1996).  In fact, this many "windy" days has not previously occurred in anything less than a 65-day period in the last ~20 winters in Fairbanks; it's just extremely unusual to have such a focused period of repeated "high winds".

The rarity of recent events raises the question of whether there's a long-term trend towards more wind in winter in Fairbanks.  Based on ASOS data from the past 20 years, the answer seems to be clearly yes.  The two charts below show the average wind speed (10m above ground) for November-December and January-February, along with the maximum values for both 2-minute and 5-second averages. 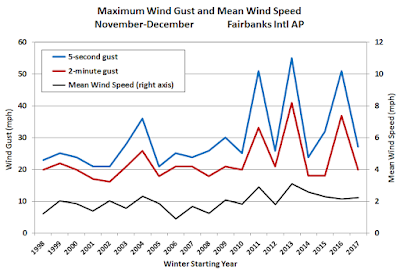 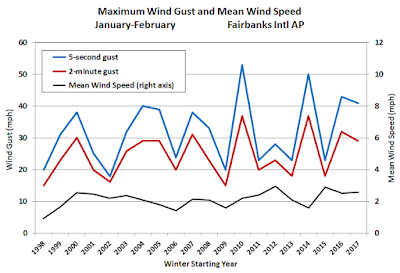 The sample size is obviously very small for the seasonal maximum wind gust values, so I dug a bit deeper by looking at frequencies of exceeding the 98th percentile of the climatological distribution.  I estimated the 98th percentiles separately for November-December and January-February and then combined the results for the following chart: 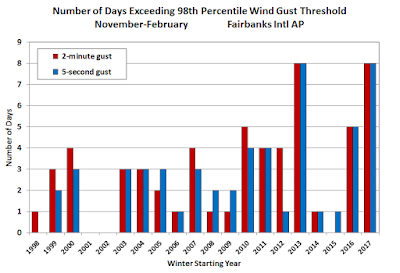 The results indicate that both 2013-2014 and this winter had 8 days with peak wind speed above the 98th percentile on both the 2-minute and 5-second time scales; the long-term expected value would be 2-3 days.  The suggestion of an increasing trend is rather striking, although 20 years is a short period, and if we take out the two big outliers the picture would be less clear.

Dividing the results into early and mid-late winter (see below) emphasizes the outliers even more.  The 98th percentile estimates are included on the legends; they're higher for January-February as a result of the normal annual cycle of wind speed in Fairbanks. 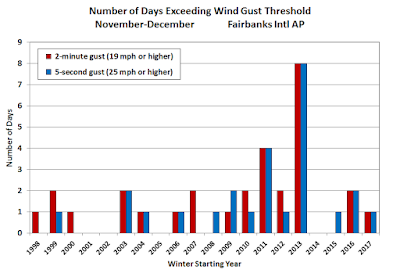 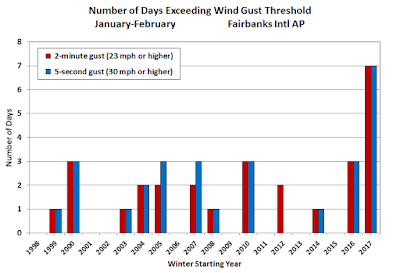 Looking farther back in Fairbanks' climate history is not simple, because the pre-ASOS wind measurements are not directly comparable with the modern data.  We can, however, gain a longer-term view from the winds reported by balloon soundings; the charts below show results for mean and maximum 850mb wind speed in November-December (top) and January-February (bottom). 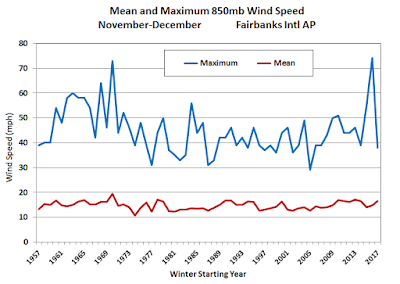 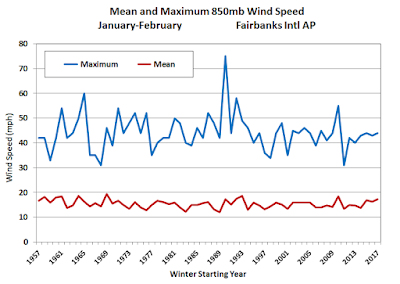 The November-December data show some indication of an uptick in 850mb wind speeds in the past 20 years, but in a longer-term context there's no obvious trend, and recent conditions do not seem to be outside the range of historical norms.

The situation for January-February is a bit more interesting, as the 850mb wind speed seems quite stable, including in the past 2 decades, and there's little evidence of a recent increase as suggested by the surface data.  Could it be that surface winds have increased while winds at around 4000' above ground level have not?  This might be consistent with a change in preferred flow direction, or perhaps it's a reflection of weaker surface-based inversions that allow winds aloft to mix down more often.  It would be worth looking into this more closely, and it would also be interesting to see if the same thing has happened at other locations, including in the Arctic where recent warming has been so pronounced.