When Will The Tripod Go Out?

The spring thaw is getting under way in earnest this week across the interior, so breakup will soon be in full swing.  It's an interesting little exercise to try to pinpoint when the tripod may go out at Nenana, based on the 15-day forecast combined with the historical range of heat units that have been required to produce breakup in the past.  Rick Thoman has produced this kind of analysis for predicting greenup in Fairbanks, so credit goes to him for the idea.

The chart below shows the latest outlook.  Note that we're using temperatures in Fairbanks, not Nenana, because of the long-term history in Fairbanks.  The green line shows the observed accumulation of thawing degree days (excess of daily mean temperatures above 32°F) so far this year in Fairbanks (through today), and the colored fan indicates a realistic probability distribution of future TDDs based on today's ensemble forecast for the next 15 days (courtesy of NOAA's EKDMOS product).  The horizontal lines show several percentiles of the historical TDDs that have been observed up to and including the date of breakup in the past (1930-2017). 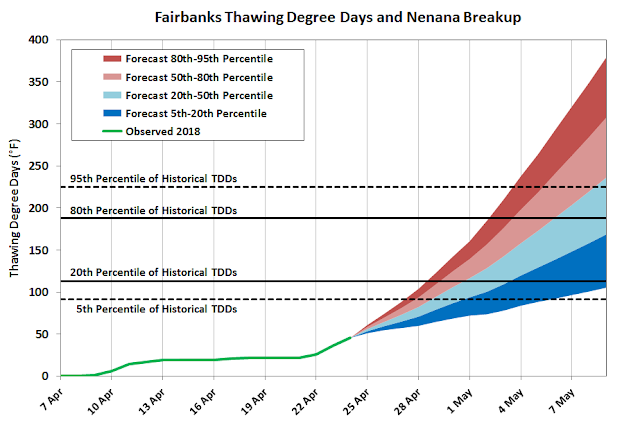 According to the analysis, there's little chance that Nenana's tripod will go out before Saturday - even if the weather is warmer than expected, and the river breaks up "easily" (i.e. with less thawing than usual), the earliest we might expect breakup is Saturday, April 28.  It's more likely that the date will be April 29 or later, and it seems quite likely that it won't be until May 1 or later.

However, I would make one cautionary note: with snowpack being well above normal this year, runoff will be greater than normal, and this should bring the date forward a little.  The Tanana river ice is also rather thin at Nenana, but ice thickness is not a strong predictor of breakup date.  With all things considered, I'll go for April 30 - May 2 as the most likely 3-day window of dates.