As summer comes to an end on a wet and rather chilly note in the interior, it's interesting to observe that August has not only been very wet in Fairbanks, but cloud cover has been exceptionally high as well.  Two lines of evidence illustrate the remarkable nature of the anomaly:

- The month's average diurnal temperature range (difference between the daily high and low temperatures) is just about the smallest on record for August in Fairbanks (1930-present); this indicates an absence of the clear skies that tend to produce warmer days and cooler nights at this time of year.  If the temperature rises no higher than 53°F today, then this month's diurnal range will be exactly equal to the record low value from August 1998.  Interestingly the third-place year was 2015, and August of last year also had a very small mean diurnal range.

- The solar radiation at the CRN station near Fairbanks has been far below normal and easily the lowest for August in the 16-year history of the site; total solar energy has been only about two-thirds of normal.  Solar panel owners in Fairbanks-land are probably not happy at the moment.

The chart below (click to enlarge) shows the seasonal cycle of solar radiation at the Fairbanks CRN site.  The blue columns indicate the 2003-2017 monthly averages of measured radiation, and the additional gray area in each column shows how much greater the radiation would be if it matched the theoretical "clear sky" input (ignoring any shading effects from topography).  In March and April the Fairbanks CRN site receives about 70% of the theoretical maximum, but increasing cloud cover causes this to drop to only 50% by September.  Consequently, for example, August produces less solar energy than April, even though the sun is higher in the sky in August.  The same contrast is true of July versus May. 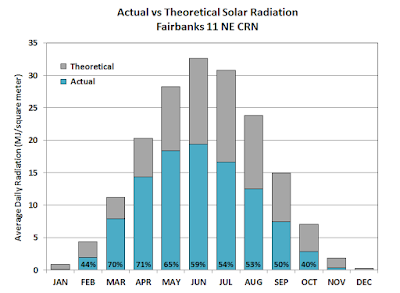 Below is the same chart for Utqiaġvik, formerly Barrow, where the CRN site also has a nice 15-year history.  Not only is the seasonal cycle in solar radiation even more pronounced than in Fairbanks because of the higher latitude (notice that Utqiaġvik sees more solar radiation than Fairbanks in May and June), but the seasonal change in cloud cover is also more dramatic. 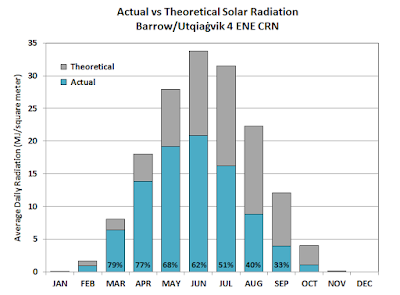 For context, here's the same chart for Champaign, IL, at 40°N latitude.  The measured solar energy is not all that different from the Alaskan sites in May, but by the end of August there is a pronounced contrast.  And of course, as I discussed recently, this accelerating seasonal difference is related to the quick end of summer in the far north and also the typical seasonal change to wetter weather in August. 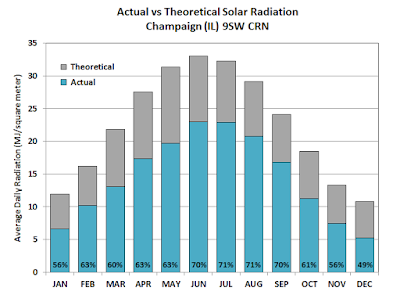 Posted by Richard James at 2:23 PM