Residents of Fairbanks experienced one of the more unpleasant kinds of wintry weather at times last night and this morning: freezing drizzle.  At least, that's what was reported by automated instruments for a period of 7 hours at the international airport and more briefly at Fort Wainwright and Eielson AFB.

Freezing drizzle occurs when cloud droplets grow large enough to produce drizzle at the same time that (a) the cloud and underlying air temperature are below freezing, and (b) the cloud top is no colder than roughly -10°C.  The cloud and drizzle droplets are therefore supercooled, but the cloud is not cold enough to contain much or any ice.  (See this old post for a more detailed discussion.)

Here are the atmospheric profile measurements from Fairbanks airport at 3pm yesterday (top) and 3am today (bottom).  The observations fit the conceptual model for freezing drizzle formation quite nicely, with a saturated layer in the lowest few thousand feet - where the red (temperature) and green (dewpoint) lines are superimposed - but cloud-free air above that.

Here are a couple of shots from the Ester Dome webcam that normally looks out over Fairbanks.  These were taken after the freezing drizzle ended, but they show the low cloud layer below with fair weather above. 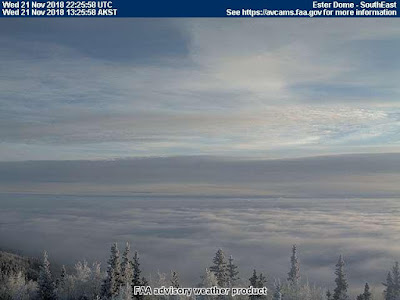 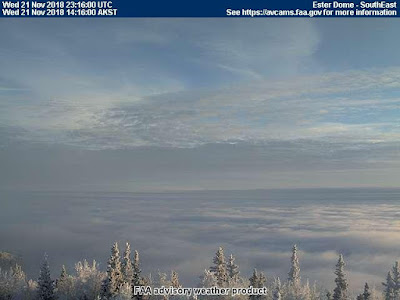 Looking at hourly ASOS data since 2000, Fairbanks tends to report freezing drizzle on just one or two days a year, on average, although the distribution is very uneven: a few winters account for most of the events.  Looking at a handful of sites across Alaska, here's the percentage of all observations (throughout the year) at which drizzle is reported along with a temperature below freezing:

I'm slightly suspicious of the data, because in more than 18 years of data there are zero reports of freezing drizzle in Eagle, Delta Junction, or Kaltag - all of which I understand to have the same ASOS instrumentation as the sites above.  Perhaps there are in fact some instrument differences that contribute to the variation in the results.

Here's the seasonal distribution of freezing drizzle reports in Fairbanks; less than 20 years is insufficient to build up a good climatology, but there does seem to be a preference for these events in early winter rather than mid-late winter. 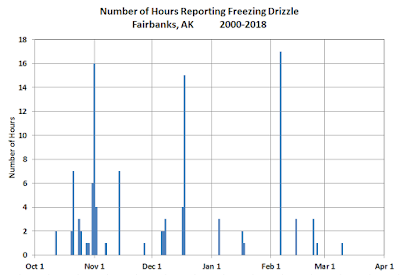 Up in Utqiaġvik, where freezing drizzle is much more common, the majority of events occur in early winter and late spring; it is very unusual in deep winter, when moisture levels and temperatures are usually both too low to produce the phenomenon. 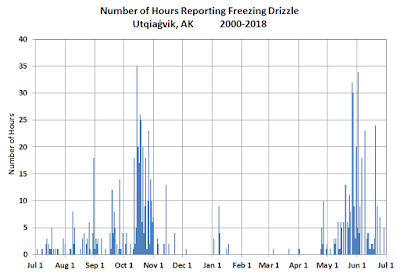