Remarkably wet weather has occurred over the eastern interior in the past week, leading to river flooding and unusually cool temperatures.  Fairbanks recorded 2.41" of rain for the week ending Wednesday, which equals the wettest June week on record (back in 1977).  Only about 10% of Junes see this much rain in total for the whole month in Fairbanks; this isn't supposed to be rainy season in interior Alaska. 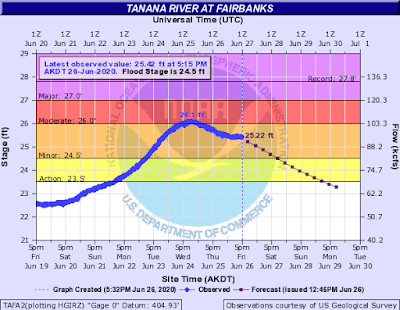 As for temperatures, the high temperature was only 53°F on Monday, and we have to go back to 2009 to find such a chilly day in the second half of June.  Besides the rain itself, the lack of sunshine was obviously a major reason for the chill; the chart below shows daily solar radiation at the CRN site near Fairbanks. 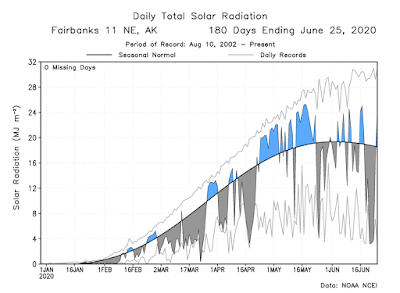 Remarkably, the 3-day solar radiation total for June 21-23 was the lowest on record (2002-present) between late March and early August.  In other words, in the last 18 years no 3-day period in April, May, June, or July has been as dull and cloudy as Sunday-Tuesday of this week; and this is all the more remarkable as it occurred right at the solstice.

The 500mb analysis from Monday afternoon gives a sense of the interesting and unusual pattern that gave rise to the persistent cloud and rain: a trough extending from the Gulf of Alaska to NW Canada, and a strong upper-level low to the north of Alaska.  I haven't looked into the details, but it seems this set-up produced a persistent frontal zone with low-level convergence and large-scale ascent of air over eastern Alaska.  More typically Fairbanks sees rainy weather in summer when there's a strong westerly flow and a ridge to the south; this was a very different situation. 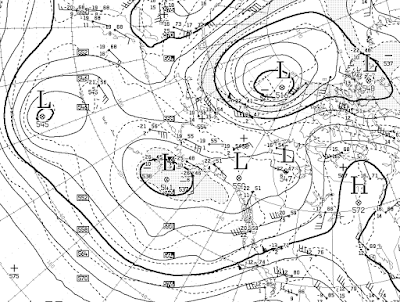