Despite continuous daylight, temperatures have dropped to freezing or below in some of the sheltered cold spots of the eastern interior in the past few days.  Examples include the Salcha RAWS site (29°F this morning), the Eagle airport (28-32°F the last three nights), and Chicken (27°F on Friday and Saturday mornings).

The graphics below show freeze events in May through September for Eagle airport and Chicken.  Note that the Eagle airport reliably sees much colder minimum temperatures than the co-op site in town at this time of year; the co-op site only reached 36°F on Friday.  Click to enlarge the figures. 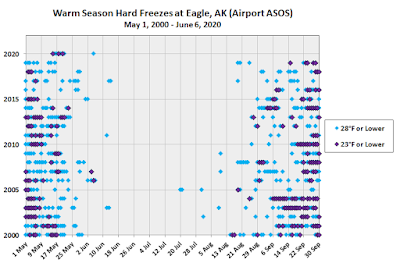 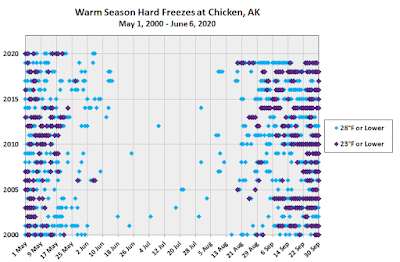 It's interesting to see the absence of any hard freezes (28°F or lower) in Eagle from mid-June to mid-August in the past 10 years, and similarly Chicken has not seen a hard freeze in the height of summer for 5 years.  This is consistent with the background warming trend and the amplified warm anomalies that have mostly prevailed in the past several years.

Higher humidity has also probably contributed to the lack of frost, because water vapor in the atmosphere is extremely efficient at reducing net radiation loss from the surface when the sun is near or below the horizon.  All else being equal, daily minimum temperatures will be higher when humidity aloft is higher, and this is a strong effect.

Nevertheless, Chicken has still managed to see a few marginal freezes in the height of summer in recent years, so it's not quite time to declare the existence of a safe growing season in this notorious cold spot. 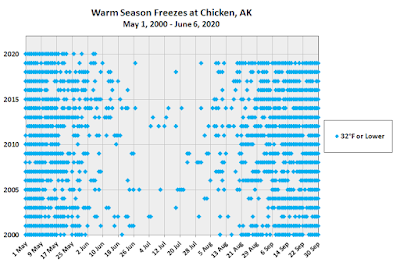