Back in January through March I penned three posts about the surprising cold in Alaska last winter, trying to identify a key cause for the dramatic change from the warmth of recent years (see here, here, and here).  In my view the discussion wasn't very satisfying in the end, as it failed to pinpoint an obvious driver for the winter pattern.  However, I finished up the last post with a promise to explore in more detail the close similarity with the winter of 1989-1990, so that's what I'll try to do here.

First let's remind ourselves of the broad pattern similarity between the two winters.  Here are the 500mb height and temperature anomaly maps for the two winters (December-February); notice the strong west-east ridge across the central North Pacific as well as the cold trough over Alaska and the strong similarity in the northeastern Pacific region (e.g. warm in British Columbia).  Click to enlarge the maps.


I also mentioned last time that the similarity extended to the temporal evolution of the high-latitude circulation pattern, with the Arctic Oscillation becoming increasingly positive in both winters.  This is illustrated in the chart below, which I find quite remarkable: the AO index evolved in strikingly similar ways at times through the two winters.  For instance, both winters saw increasingly positive peaks of the AO, and even with similar timing: around December 1 and early January, and then a pair of enormous peaks during February.

A daily AO index above +6 is a rare extreme, and outside these two winters only one other date since 1950 has achieved this feat: January 14, 1989, which was right at the onset of the infamous Alaska cold snap.  Coincidence?  Not a chance. 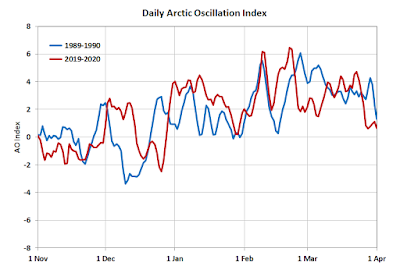 An obvious question therefore is, was there a common mechanism that was driving the AO towards a more amplified positive state as these winters progressed?  In considering this possibility, the first place to look is the tropics, where we might hypothesize that a persistent pattern of rainfall anomalies provided a favorable configuration to strengthen the circumpolar flow in the high latitudes.  This could occur either by a pathway that directly strengthens the westerly momentum at higher latitudes, or by an unusual reduction in disturbances to the normal wintertime polar vortex.  In atmospheric dynamics, the tropics tend to drive the extratropics more than the other way around - for example, the dominant El Niño/La Niña oscillation has very predictable effects on higher latitude circulation patterns.

In Part 2 of the discussion I looked at the tropical rainfall patterns from last winter and failed to find a similarity to historical patterns associated with cold in Alaska.  However, that analysis was a broad overview, and 1989-1990 was mentioned as a relatively close match, so let's take a closer look at the tropical features of the two winters.

First, the sea surface temperature maps (see below) show a strong similarity with respect to a region of anomalous warmth centered near 0°N 180°E.  (Note that I've plotted both maps in terms of the departure from the immediately preceding 30-year mean to put them on equal footing in regard to climate trends.)  Equatorial warmth near the Date Line corresponds approximately to the Niño4 region, which is the westernmost of the boxes that are used to measure ENSO SST anomalies (see here for explanation).  We can therefore describe the warmth as a kind of El Niño warming, but it's a "Central Pacific" or "Modoki" El Niño anomaly.  A traditional El Niño has its equatorial warmth focused much farther east, closer to South America. 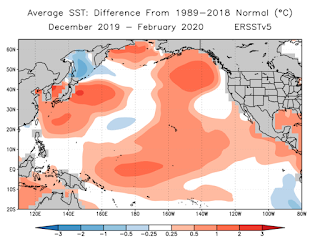 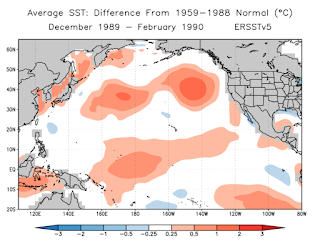 Looking at rainfall estimates from the state-of-the-art ERA5 reanalysis gives an indication of how the tropical circulation was displaced relative to normal. 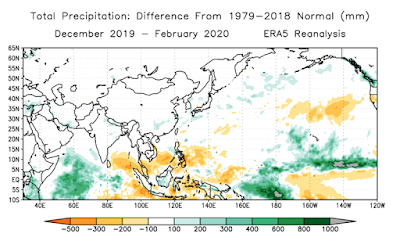 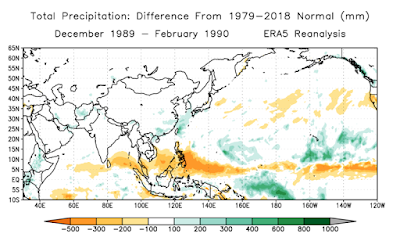 Both winters saw enhanced rainfall near the equator at about 170°E (on the west side of the warm SST region), and both years also had dry conditions to the east of the Date Line around 0-5°N, and wet conditions north of this and extending northward roughly to Hawaii.  Another key similarity is the zone of dryness north of the equator from about 80°E-140°E, reflecting a large region of unusual subsidence (sinking air and dry weather) from Sri Lanka to the Philippines.  (These maps are showing absolute rainfall anomalies rather than the more usual "percent of normal", because it's the absolute magnitude of the tropical heating anomalies - caused by excess condensation in deep rain clouds - that we're interested in.)

Finally, the lower atmospheric wind patterns tie together the SST and rainfall anomalies, and really illustrate again how similar the two winters were in the Pacific basin.  The maps below show the average 850mb winds (speed and direction) at left, and the maps on the right show the departure from normal of the westerly wind speed.

The pattern of west-east wind anomalies is remarkably similar from the tropical region spanning the eastern Indian Ocean to the western Pacific Ocean, and all the way up to the central and northern North Pacific.  Focusing on the equator, notice the change from easterly wind anomalies over Indonesia to westerly anomalies over the western Pacific; this implies a very similar focus of subsidence and lack of rainfall near 130-140°E.  Farther east, the westerly wind anomaly extending to near the Date Line is consistent with high SSTs, because the usual easterly trade winds (a cooling influence) were weakened or even reversed in this area.

Putting it all together at last, my interpretation is that the pronounced realignment of tropical rainfall patterns was closely linked to the intensification of the mid-latitude ridge across the North Pacific and, therefore, the positive AO phase.  A first and simple explanation is that enhanced rainfall near the Date Line strengthened the Hadley circulation over the central Pacific, with significantly more mass being displaced poleward at high elevation and then descending to reinforce the subtropical ridge to the north (roughly north of Hawaii).  A stronger subtropical ridge is a key aspect of the positive AO phase, as it implies a stronger pressure gradient northward to the Arctic, and therefore a stronger mid-latitude jet stream.

A second and slightly less straightforward aspect involves the fact that rain clouds over Indonesia and the far western Pacific are usually a strong source of wave disturbances that travel north (and south) into the extratropics and affect the high-latitude circulation.  When these disturbances are frequent and strong, they tend to weaken the polar vortex and produce a less positive AO phase; but last winter these wave disturbances were weaker than usual, and this contributed to the polar vortex becoming very strong and the AO becoming increasingly positive.  And so the reduction in rainfall near the Maritime Continent seems to be a key piece of the puzzle, just as much as the enhanced tropical rainfall farther east.

If you've made it this far, congratulations - this turned into a slightly technical discussion.  Understanding the remote influences and connections in global climate is an enormous challenge, but the remarkable convergence of events across the North Pacific and Arctic in the two winters of 1989-1990 and 2019-2020 provides a clear illustration, I think, that these connections are real and significant.

Posted by Richard James at 4:57 AM