A Chill in the Air

What a difference a week makes.  Interior Alaska temperatures quickly dropped off from a high temperature of 51°F last Saturday, and thermometers marched steadily down through the week, with each day colder than the last until today.  Yesterday was remarkably cold in some spots; here's a round-up of low temperatures yesterday morning (click to enlarge). 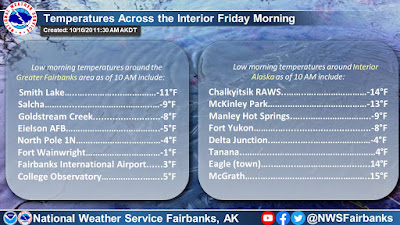 The -11°F (actually -12°F) at Smith Lake on the UAF campus is quite impressive for the date, although the sensor is in a serious cold spot.  Fairbanks airport only made it down to +3°F.

Here's a look at the seasonal plunge over the last 3 weeks as registered at the Smith Lake site.

The Salcha RAWS measured -9F, and not surprisingly the river there is already iced up.  Here's a beautiful photo from this morning, courtesy of Twitter user NateoftheNorth.  You really should click to enlarge this one. 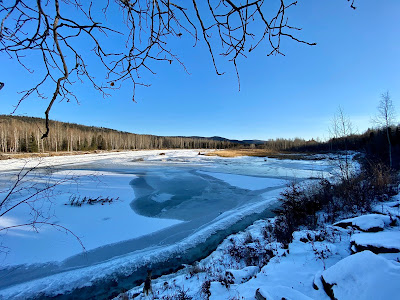 Despite the cold, measurable snow still hasn't arrived in Fairbanks, with just a trace reported on Wednesday and Thursday.  It's interesting to consider the coldest conditions that have ever occurred prior to measurable snow: back in 1941, the temperature dropped to -6°F on October 14, and snow wasn't measured until 4 days later.  This year's +3°F ties with 1969 for second coldest prior to having snow on the ground.

If we look at accumulated cold as measured by total freezing degree days, then this year is so far in 3rd place for cold prior to any snowpack.  2016 also had a decent freeze prior to the October 20 first snowfall, but most years have little or no freeze-up prior to snow; the median FDDs is zero. 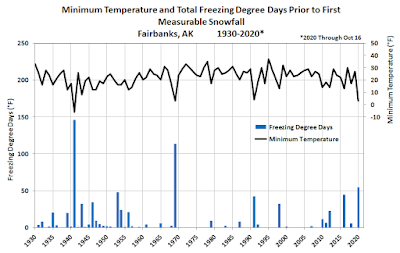