The other day Rick Thoman published an interesting comparison between average temperatures in the past decade and the 1981-2010 normals, for Anchorage, Fairbanks, and Utqiaġvik.  On average, the decade has been warmer than the prior 30-year baseline throughout the year for all three cities, but late autumn really stands out as having seen the most exceptional warming at all three sites - and especially in Utqiaġvik, as we've documented here many times before.

Drilling down to change at the daily level, here's how average temperatures over the past decade have differed from the 1981-2010 normals for Anchorage & Fairbanks. Most warming in the late autumn, least warming late winter, and for Fairbanks, mid-summer. #akwx @Climatologist49 pic.twitter.com/tOswzBYNa2

An additional aspect that stood out to me is how warm the decade has been in Anchorage, given that Anchorage has the smallest temperature variance of the three locations.  In a climate that's inherently less variable, a relatively small temperature change takes on greater statistical significance.

One way of leveling the playing field is simply to divide each day's decadal temperature anomaly by the 1981-2010 standard deviation of daily mean temperature on that day.  With a little help from Rick, I managed to come close to reproducing his results, and the charts below show the comparison of the absolute (top) and standardized (bottom) temperature anomalies. 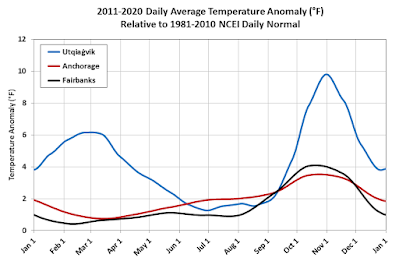 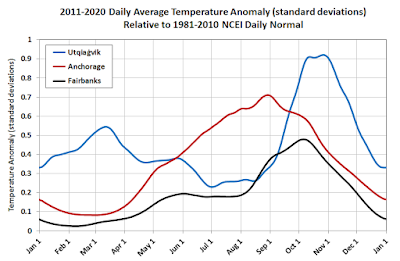 The second chart illustrates my point about Anchorage, particularly for summer and autumn: the last decade has been really exceptionally warm in Anchorage when we factor in the low variance of temperatures in the prior decades.  I typically think of Utqiaġvik's autumn warming as being "unrivaled" and "off the charts" in terms of statistical significance - and it is - but this simple analysis suggests that Anchorage is arguably not that far behind in terms of how persistently warm it's been in late summer and autumn.

If we focus on temperatures for August and September in Anchorage, we find a similar result for conditions averaged over the two month period.  In the past 10 years, the Aug-Sep mean temperature has been 1.3 standard deviations above the 1981-2010 mean of Aug-Sep temperatures.  This is actually greater than the October standardized anomaly in Utqiaġvik: the October mean temperature in Utqiaġvik has been 1.2 standard deviations above the 1981-2010 baseline.

When we compare the two time series in absolute terms (see below), Utqiaġvik's change is obviously more eye-catching, not least because of the amazing collapse in variance nearly 20 years ago.  However, the last 5 years of early autumn conditions have certainly been very exceptional in a local sense in Anchorage; and this is connected to persistent and remarkable warmth across the entire North Pacific - a topic for another time. 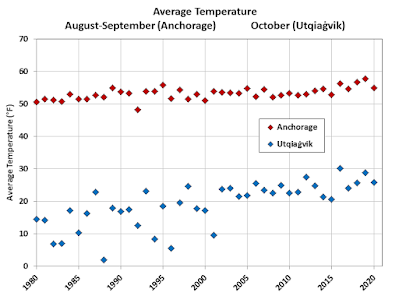