The breakup portion starts on Slide 14.  To probably no one's surprise, the key message is, "We expect a dynamic breakup with above average potential for ice jams and flooding."

I thought this was a helpful graphic to explain the difference between dynamic (mechanical) breakup and thermal breakup: 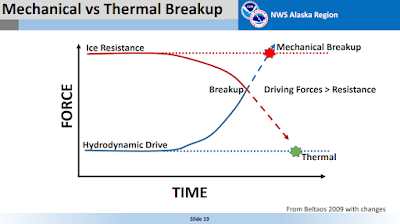 The higher the ice resistance at the point where it is overcome by driving forces, the more "dynamic" the breakup is said to be; at the dynamic extreme, it's a violent process involving what we might call an irresistible force and an immovable object.  At the other end of the spectrum, ice resistance crumbles before the driving force rises a lot, and the whole process is relatively uneventful.  Most breakups occur somewhere in the middle, but this year's abundant snowpack and this month's chilly conditions have tilted the odds significantly towards the dynamic end.

Here's an NWS graphic showing estimated flood potential for settlements across Alaska.  Circle is the only location with a "high" risk rating, with an estimated breakup window of May 9-15.  Note that the risk pertains to both ice jam flooding and snowmelt flooding, with the latter involving the greatest discharge. 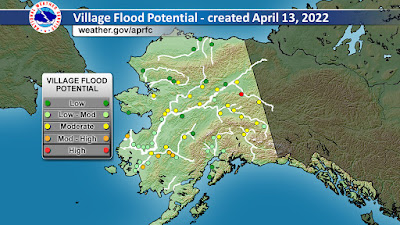