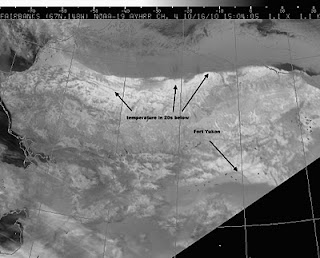 This morning's705AM ADT infrared satellite image of northern Alaska shows a hodgepodge of clouds, but where skies remained clear, temperatures fell to lowest levels of the young winter. The Chalkyitsik RAWS, between Fort Yukon and Chalkyitsik, reported 21 below, and 15 below at the Fort Yukon Airport. The image shows colder temperatures on the inland North Slope, with surface temperatures in the 20s below, though none of the few inland weather stations happen to be in the cold spots. Umiat got to 14 below before the clouds moved in.
Posted by Rick at 9:27 AM