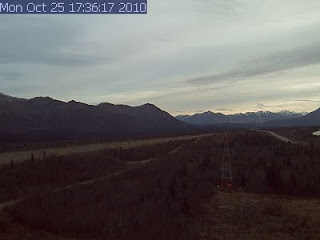 The slow start to the snow season is nowhere more extreme than in the central Alaska Range. Both Healy and Denali Park HQ have no snow cover at all, which is unusual enough, but that could be attributed to the persistant southeast flow aloft. Not so near the divide; this FAA webcam image from Monday morning, from the old Summit airstrip south of Cantwell in Broad Pass, shows not only no snow at pass level, but almost nothing even up the mountains.
Posted by Rick at 9:43 AM