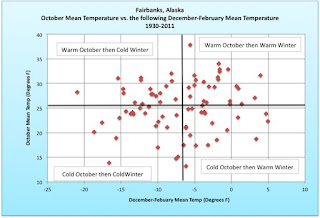 However, this is not the whole story. We know that the warm phase of the Pacific Decadal Oscillation (1976-2007) correlated with much warmer winters in Interior Alaska than previous decades, but October (and the autumn in general) did not warm very much at all during the same time period.  I'll take at look at this complication in another post.
Posted by Rick at 4:02 PM