September 1992 brought some of the amazing out-of season-weather ever in Alaska. The Fairbanks area received several snowstorms during the month totaling more than two feet, and amazingly, the snow that started to accumulate on the September 13th remained on the ground until the following April. There was enough snow for people to be skiing on the 15th and I was running dogs with a sled on the autumnal equinox. The snow cover allowed temperatures to remain exceptionally low and produced the longest run of daily temperatures of four or more standard deviations below normal in Fairbanks weather history.

I'll be doing several posts on this historic event, starting with retrospective of September 10, 1992. Here is the mean 500mb pattern and height anomalies. The remarkably deep low north of Barrow was well forecast by the numerical models at the time, though we did not believe it in the days leading up to this event, referring to it jokingly as the "death star". Such a deep low so early in the autumn was beyond reasonableness. The 850mb temperatures show a deep cold airmass over nearly all of the state. Temperatures in this NCEP/NCAR reanalysis are in degrees Kelvin, so freezing is 273K. The low temperature on the 10th at Fairbanks was 18F, easily a new record low for the date and the first of what would be eight daily record lows set during the month. And there was no snow on the ground yet. 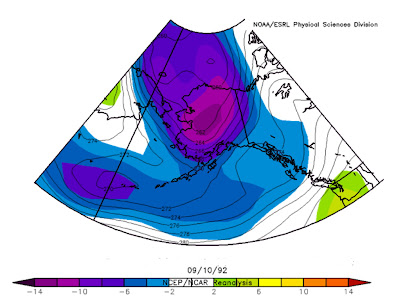