Fairbanks has now tied the all-time record for June total precipitation (3.55", tied with 1949), so it's natural to ask whether this has any statistical implications for the rest of the summer.  In other words, based on the historical data, does a wet June portend a washout for the rest of the summer?  This is a straightforward analysis to perform: see the scatterplots below for June precipitation versus precipitation in July and in August; the horizontal gray lines show the median value for July and August (1.71" in both months, as it turns out).  There is a hint of a positive correlation for July, as the very driest Junes have generally been followed by dry Julys, and a wet July is slightly favored after a wet June.  The two wettest Junes were in 1949 and 1955, and both saw a wetter than normal July.  August rainfall, on the other hand, shows no discernible connection to June rainfall. 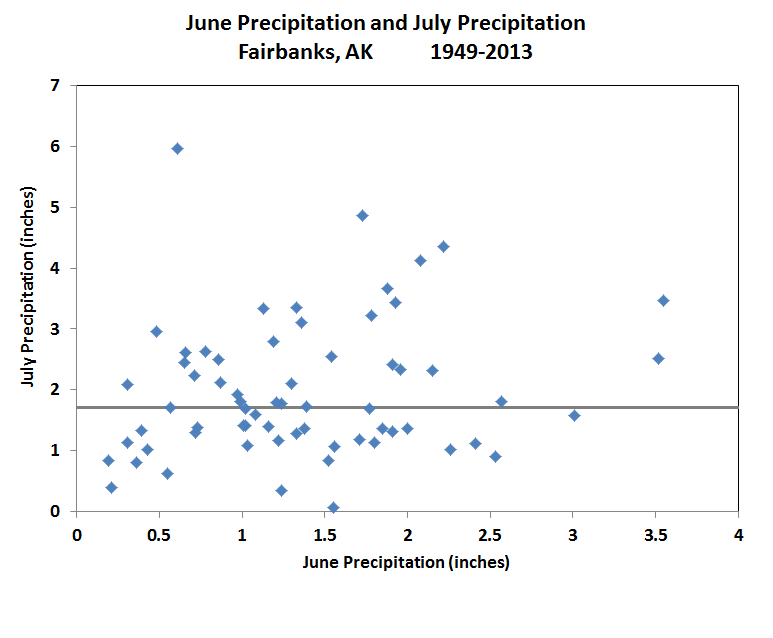 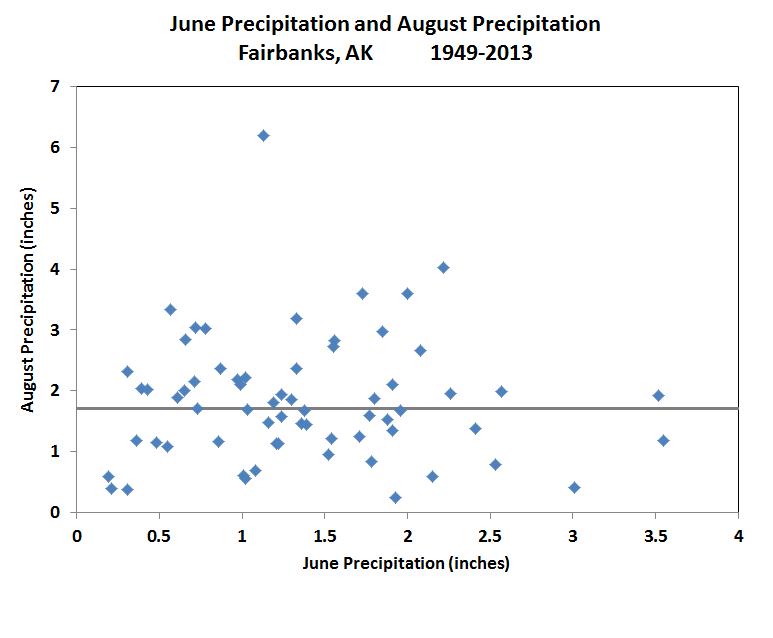 Looking at mean temperatures in July and August (see below), there seems to be a suggestion - more for August than for July - that June precipitation is slightly positively correlated with temperatures later in the season.  1949 and 1955 are obvious exceptions, but these were negative PDO summers, unlike this year.  Here are the June PDO index values for the top 8 wettest Junes in Fairbanks: 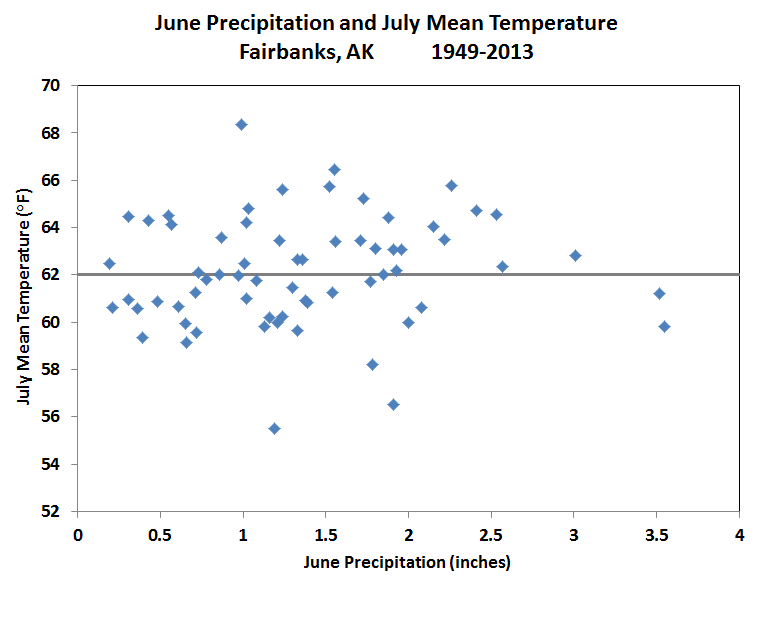 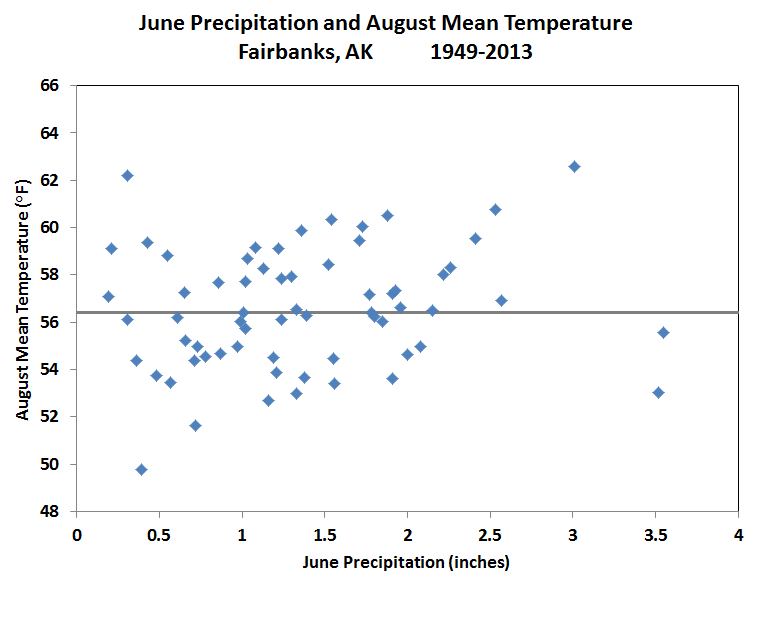 Given this information, we probably shouldn't be too surprised if July is also damp in Fairbanks, but it doesn't seem particularly likely that the recent unusual coolness will continue.  With warmer than normal water in most of the North Pacific this summer, unusual warmth appears to be a more likely outcome for the late summer.

With the PDO phase apparently not closely related to June precipitation in Fairbanks, what else can we identify as a possible cause?  I would suggest (as I did last summer) that the Quasi-Biennial Oscillation bears some responsibility for climate variations at this time of year.  The chart below shows the June QBO index value plotted against June precipitation, and suggests that precipitation is enhanced when the QBO is strongly negative.  Monthly QBO index values from the past 3 years are shown in the last chart below; we can see that the QBO was strongly positive last summer, and continued positive through the winter, but finally turned negative for the May average and has probably been significantly negative this month.  While this by no means guarantees a wet June, it does seem to raise the odds; and I would also suggest that if the QBO becomes strongly negative by August, then it will favor a relatively warm month then. 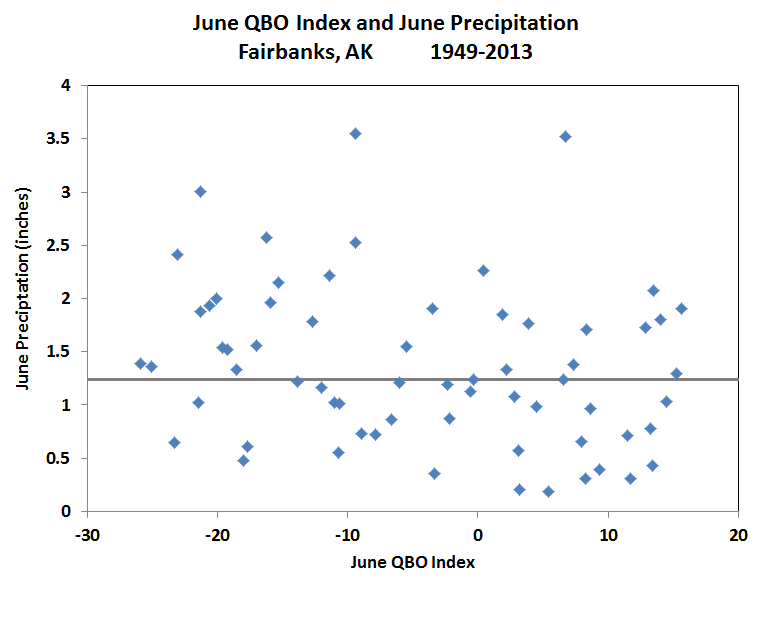 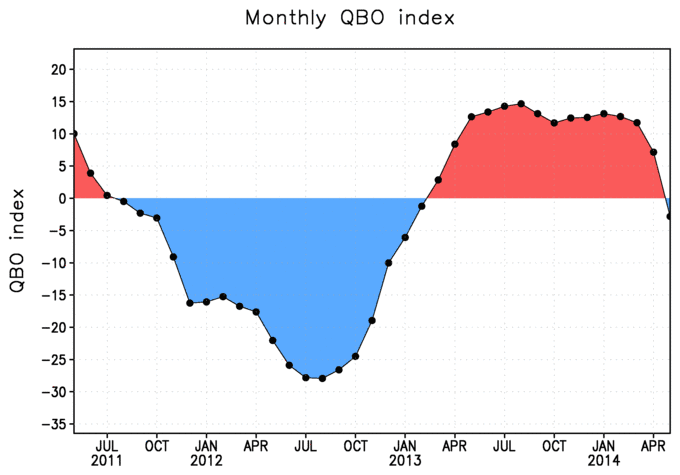