If you don't like the weather, just wait 15 minutes – unknown 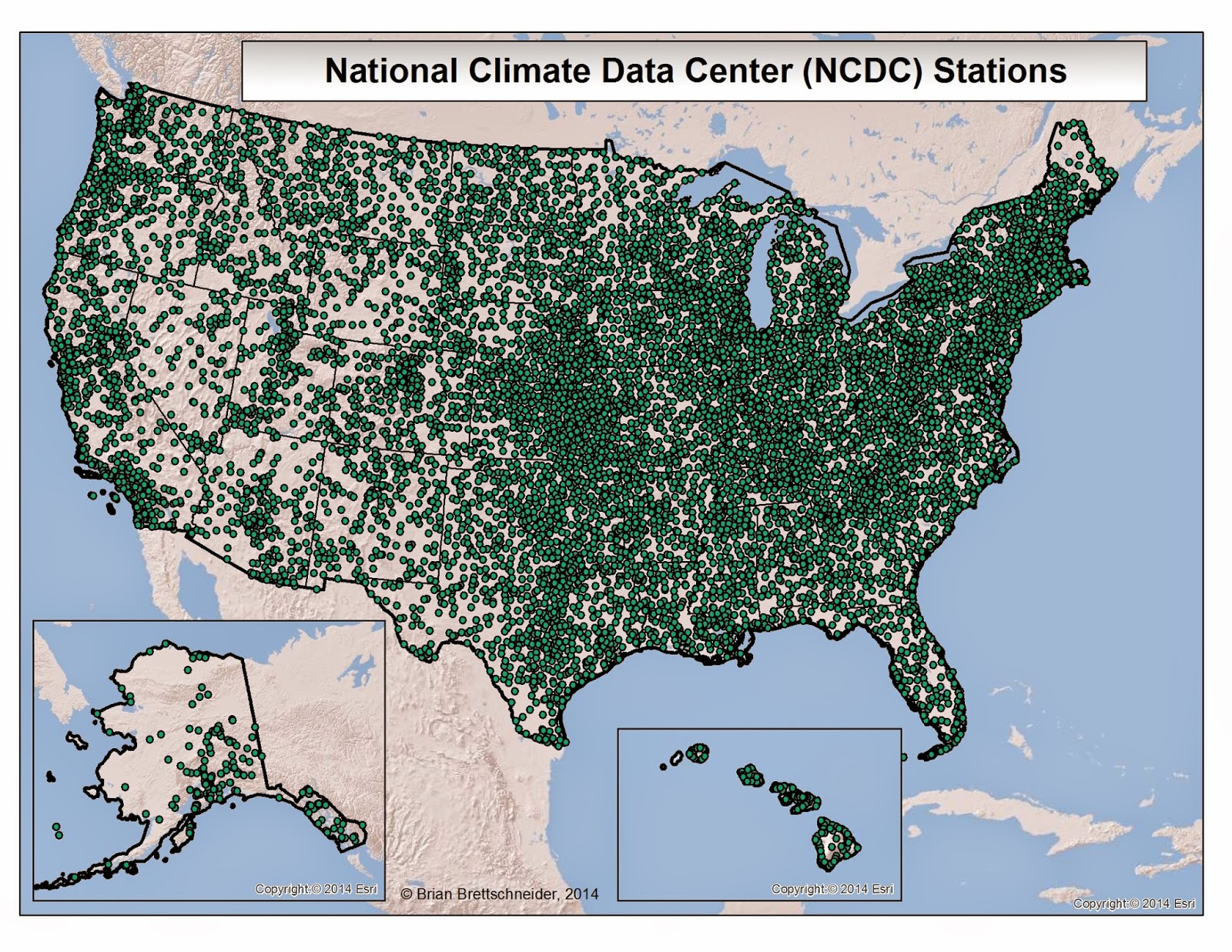 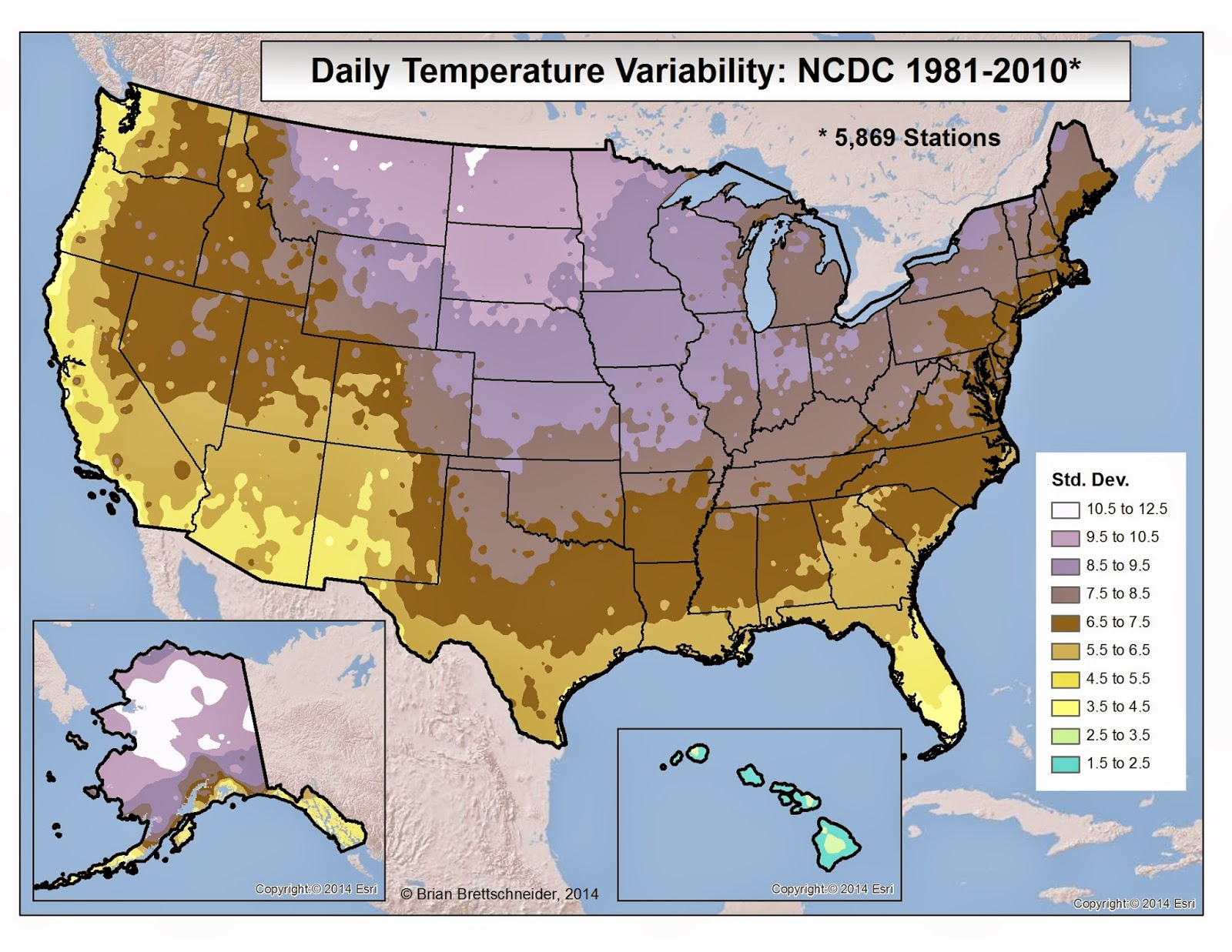 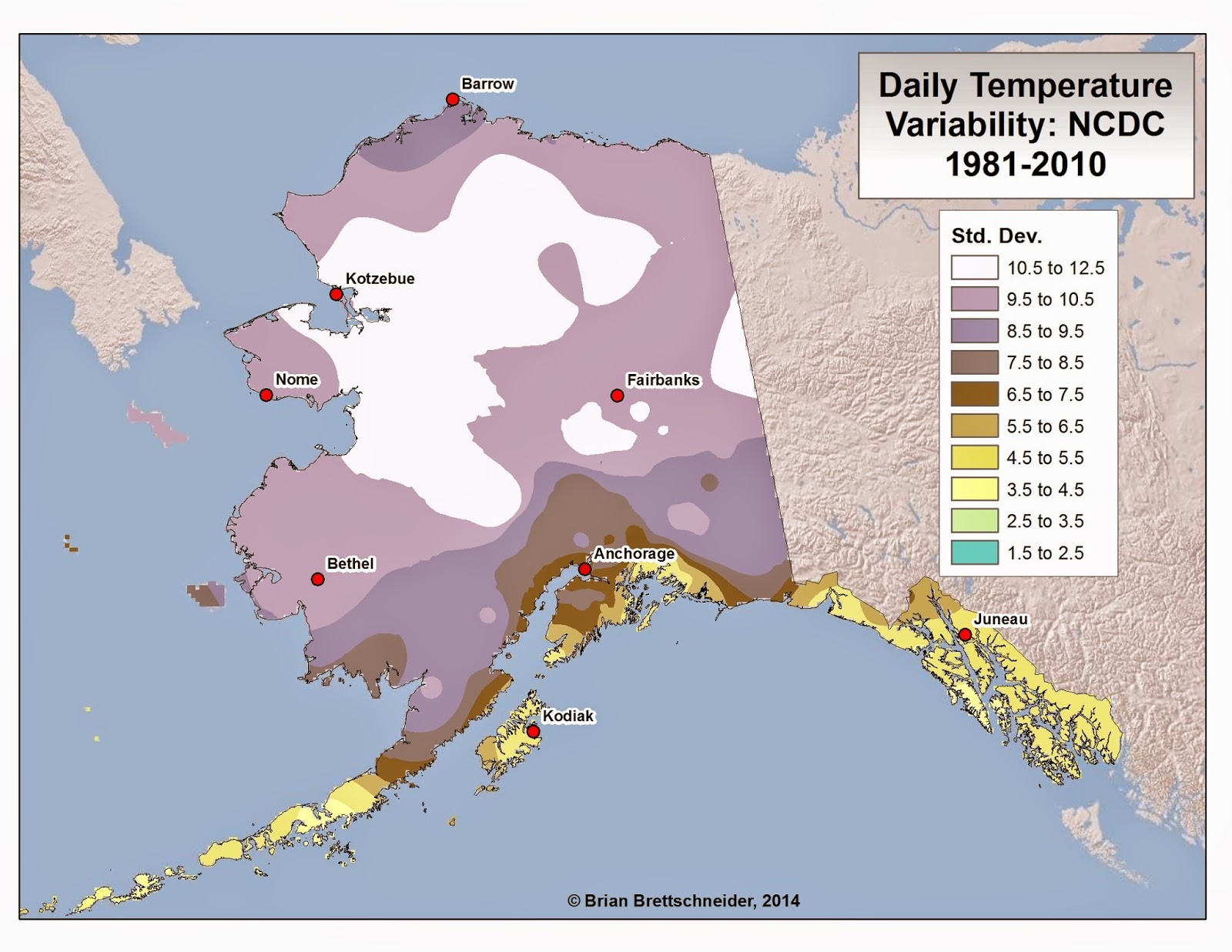 A much better method is to look at monthly precipitation values and see how much they change over the course of the year. In many cases there are substantial difference between wet and dry months. Some stations in California and Alaska receive 60% of their annual precipitation in a three-month window. On the flip-side, many stations in the Northeast and mid-Atlantic have precipitation evenly distributed across all months.

Figure 4 shows the month-to-month variability in precipitation values across the year for the entire U.S. and Figure 5 shows Alaska only.. To make this map we calculated the difference between the NCDC normal precipitation for each month and compared it to the value that would occur if each month received 1/12th of the annual precipitation. For example, image two stations that each average 24" of precipitation per year. One station averages 2" for each of the 12 months. The other station receives 80% of their annual precipitation between May and August. In this hypothetical, the first station has very low monthly precipitation variability while the second station has very large precipitation variability. This type of assessment is called a goodness-of-fit test. In this case we used the chi square goodness-of-fit-test. The values produced by this test are unitless and are evaluated against a table of significance values. To avoid confusion, the values are left off the map and substituted with "high" to "low" labels. 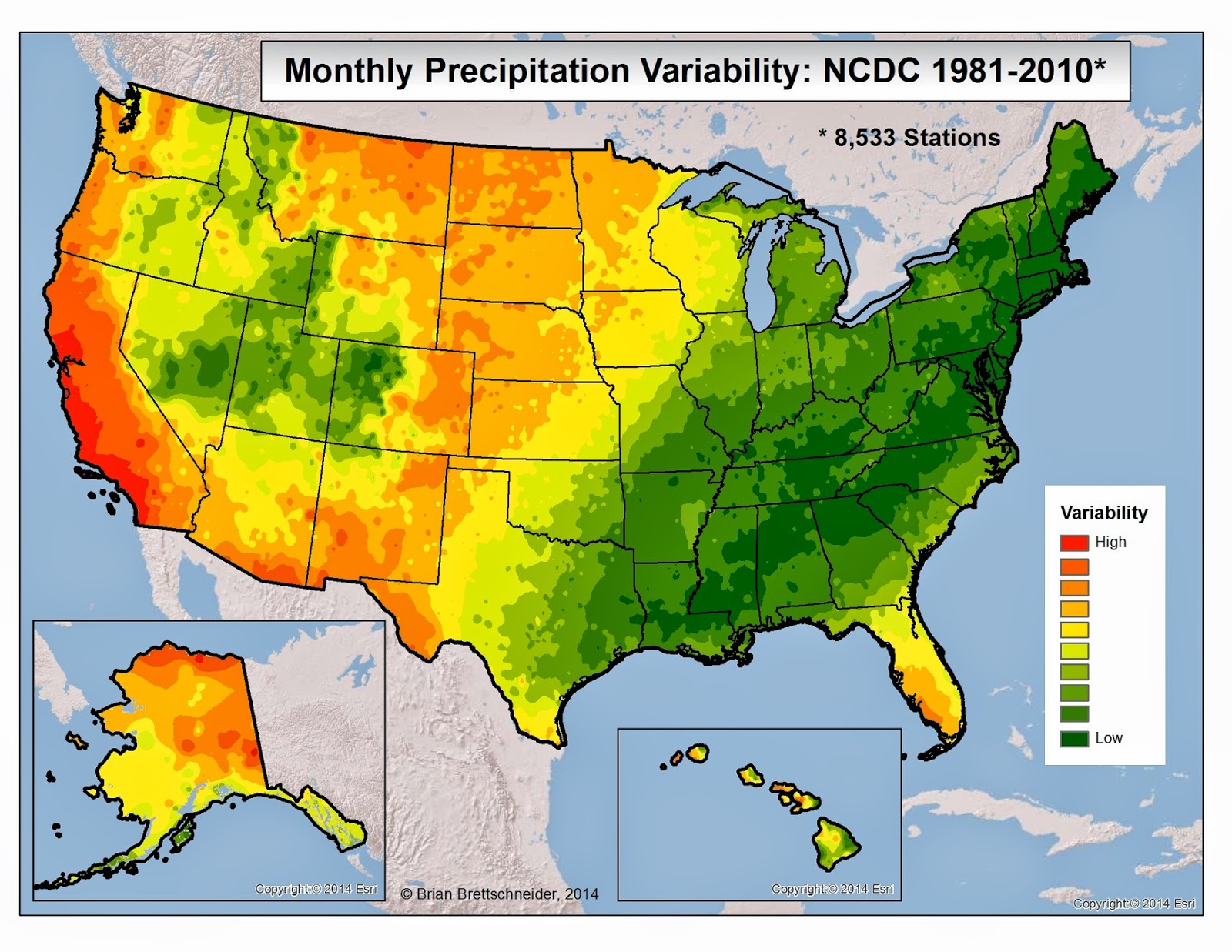 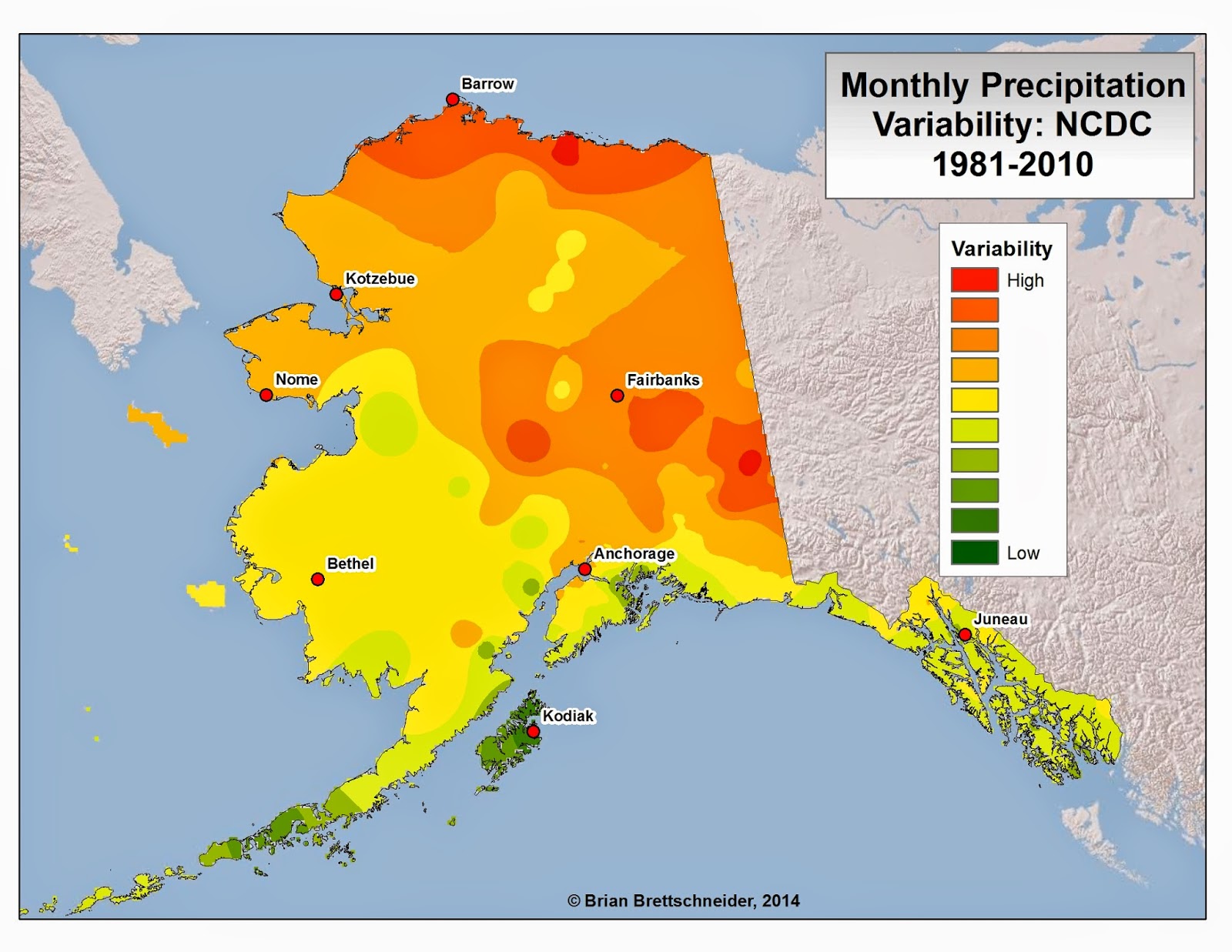 I had assumed that all cold regions would have low winter precipitation values due to the moisture capacity of the air being greatly reduced. However, that is only the case in the Northern Great Plains and Alaska – not in New England. The other quite surprising finding is the low month-to-month variability in the Great Basin. Perhaps this is an artifact of multiple synoptic-scale parameters in other regions that all converge in this region. 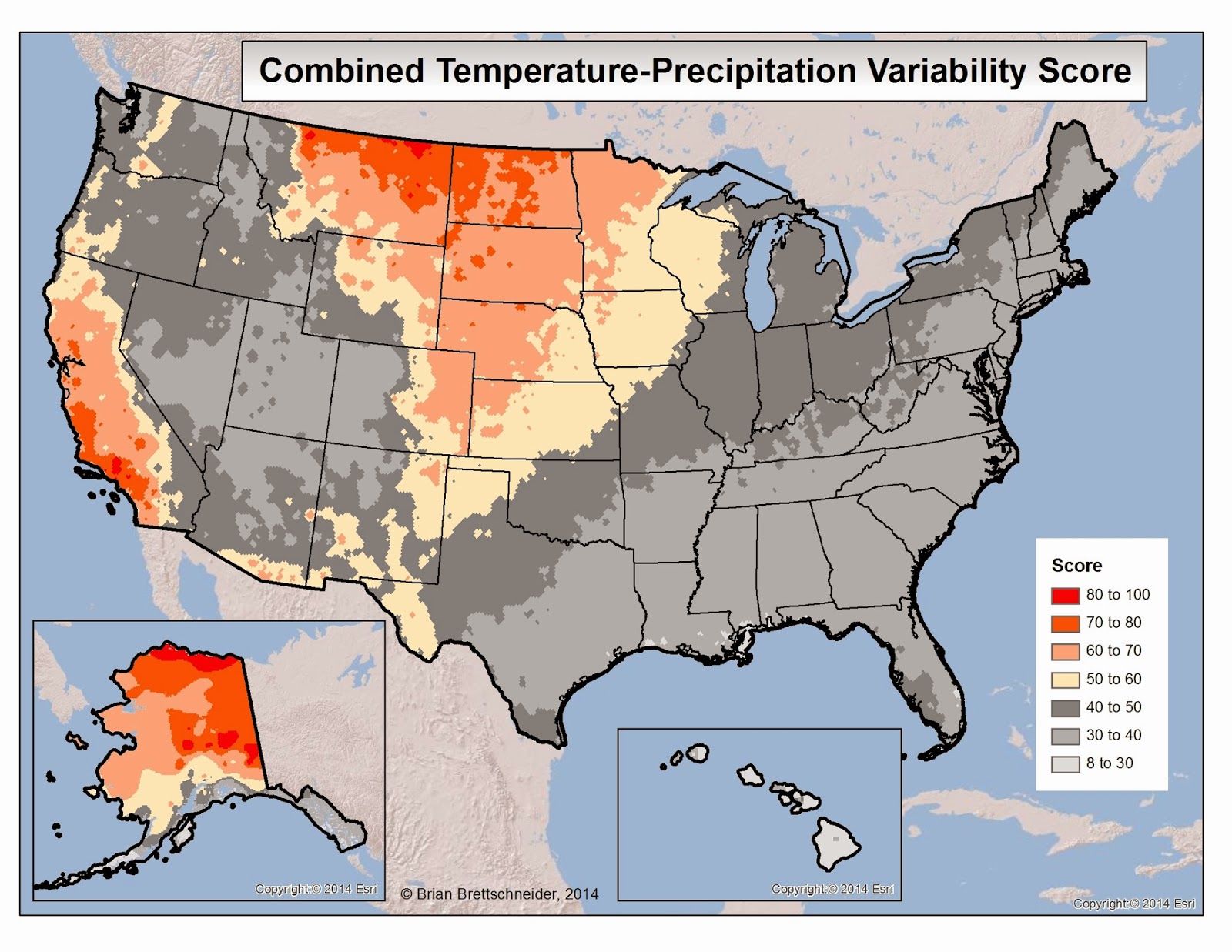 Figure 6. Precipitation-climatology combined variability score. Values are scaled up to 100. 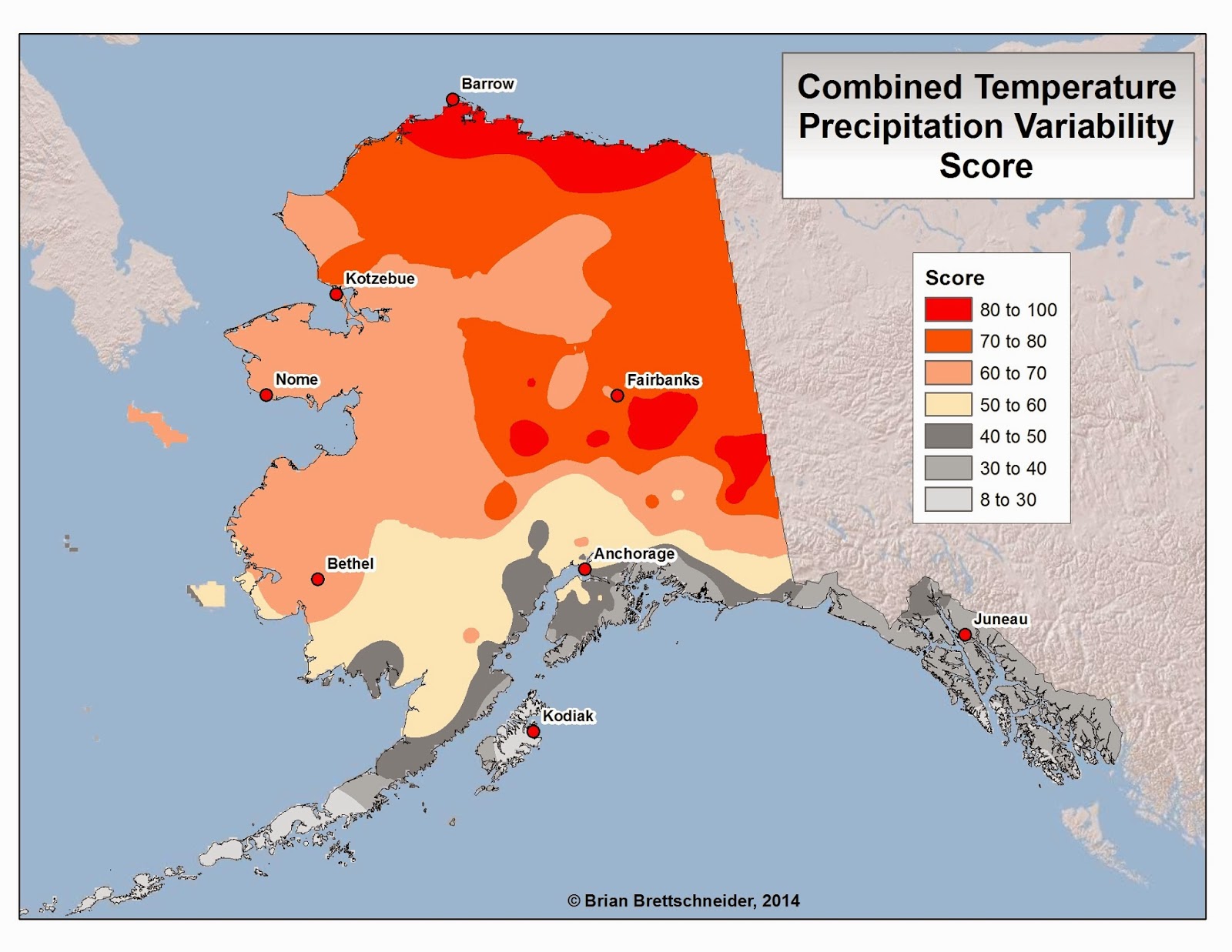 Figure 7. Precipitation-climatology combined variability score for Alaska only. Values are scaled up to 100.

Greatest and Least Variability by State

Earlier we noted which stations had the greatest and lowest values. However, if we limit the analysis to cities with at least 25,000 people, it becomes a little easier for people to relate to. Table 1 below shows the station with the largest variability score (max =100) for each state. Santa Clarita, California, has the largest value of any city in the nation. At the bottom of the list is Hilo, Hawaii. Their variability score is less than half that of the second lowest statewide value. 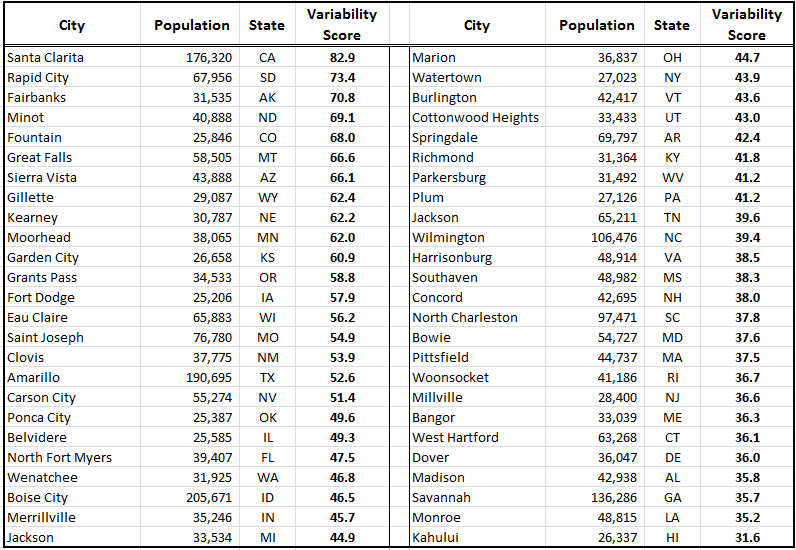 Table 1. Largest variability score for each state when looking at cities with at least 25,000 people. 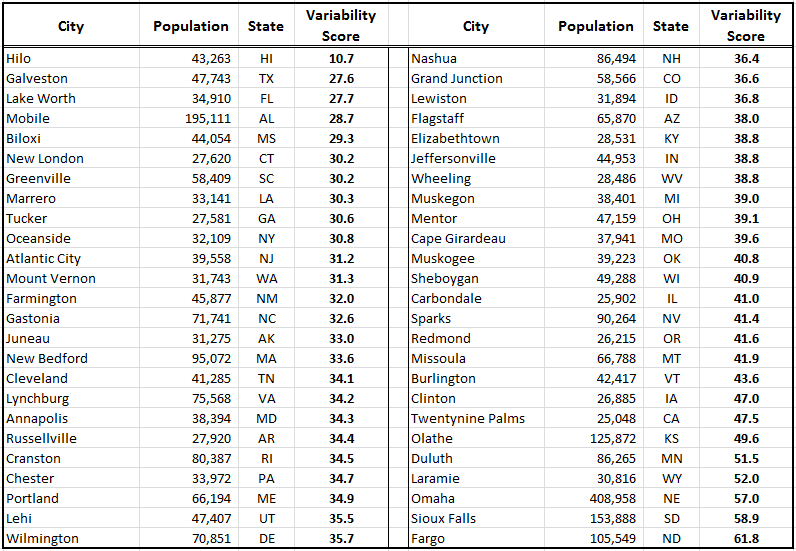 Table 2. Smallest variability score for each state when looking at cities with at least 25,000 people.

Greatest and Least in Alaska 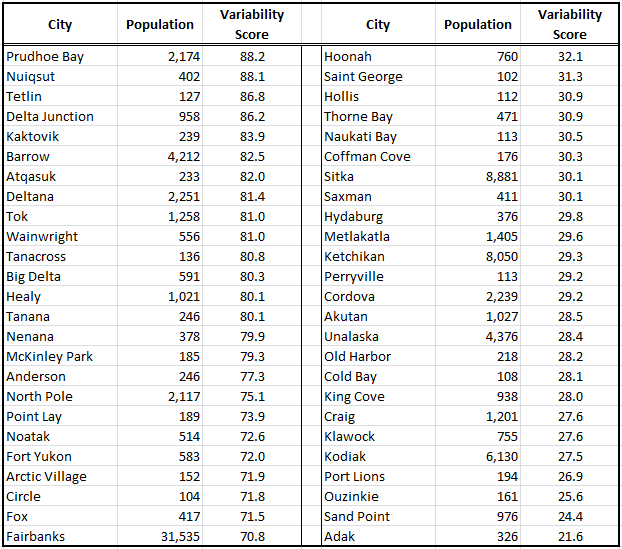 Table 3. Largest (left) and smallest (right) variability scores for Alaska cities with at least 100 people. These are "cities" as defined by the U.S. Census Bureau. We make no distinction between a city, Census defined place (CDC), a village, or a Native village.