As snow fell across Fairbanks-land yesterday, I found myself wondering about the joint distribution of precipitation and temperature during the winter months.  We've seen before that temperature and precipitation are slightly inversely correlated in Fairbanks in early winter, i.e. unusually warm conditions are more associated with dry than wet weather.  This is not true for most of Alaska, but the prevalence of chinook winds in the eastern interior creates anomalous behavior in the climate statistics.

To delve into this a little more deeply, I calculated the rank correlation coefficient for monthly mean temperature and monthly total precipitation for 1930-2013 in Fairbanks, and for 1996-2013 at Keystone Ridge.  For the Fairbanks calculation I removed the long-term linear trend in temperature (by month) to help obtain a truer comparison across the decades. 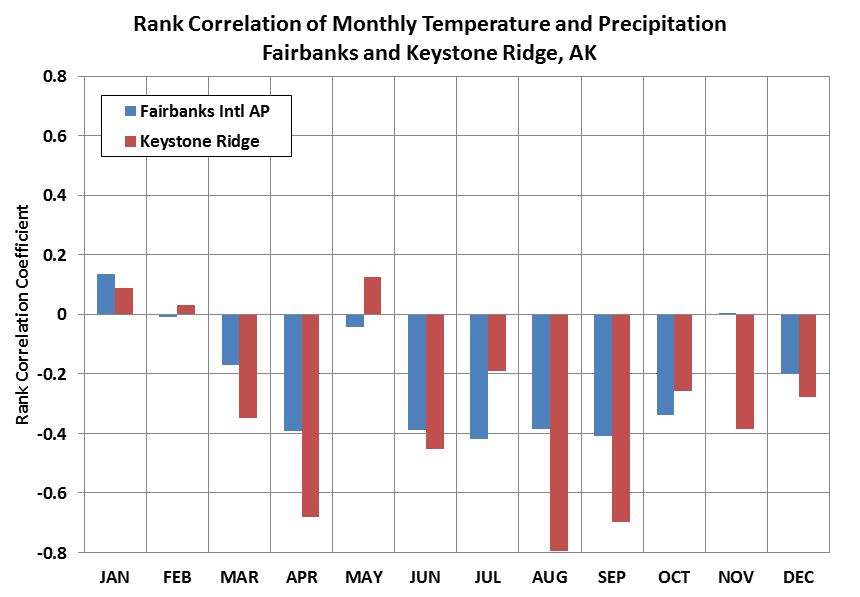 The chart above shows that the monthly correlations are quite weak for Fairbanks in the winter months.  Keystone Ridge shows somewhat more of an inverse correlation in November and December, and both stations show more substantial negative correlations in summer and autumn.

A slightly different picture is obtained when the correlations are derived from weekly data.  The chart below shows the rank correlation for weekly-average temperature and weekly-total precipitation for each day of the year, based on a +/- 15 day window centered on each date.  No adjustment for long-term trends is included here.  Based on the weekly data, there is a weak positive correlation between temperature and precipitation at Fairbanks airport from November through February, but the correlation remains negative at Keystone Ridge through virtually the whole year. 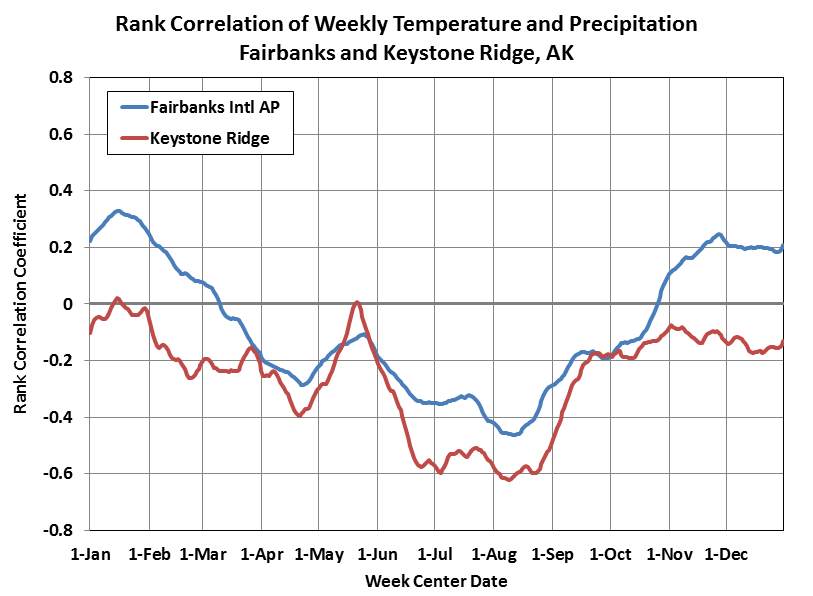 The weekly and monthly correlations show opposite signs for Fairbanks in December, which is interesting; this suggests that warm weeks tend to be relatively snowy, but warm Decembers are more often drier than average.  However, the correlations are weak, and it is a bit dangerous to draw conclusions from summary statistics like this.  The charts below show the joint distribution for each month from November through March, and it's very evident that the climate actually produces a peak in precipitation amounts for near-normal temperatures, with drier conditions during both warm and cold extremes of temperature.  This is not difficult to explain: very warm conditions arise from southerly chinook flow, which is dry, and very cold conditions arise from northerly flow, which is also dry.  Therefore it's overly simplistic to think in terms of a monotonic relationship between winter temperature and precipitation in Fairbanks.

By the way, the extreme outlier for precipitation in January is not an error.  This month (January 1937) was more than twice as wet as any other winter month, and was the second wettest calendar month on record in Fairbanks (1930-present).  An extraordinary 66" of snow was received.  Only three times has Fairbanks received an inch or more of precipitation in a single calendar day from November through May - all in January 1937.  The 1930s sure was an interesting time for climate in Alaska (and elsewhere). 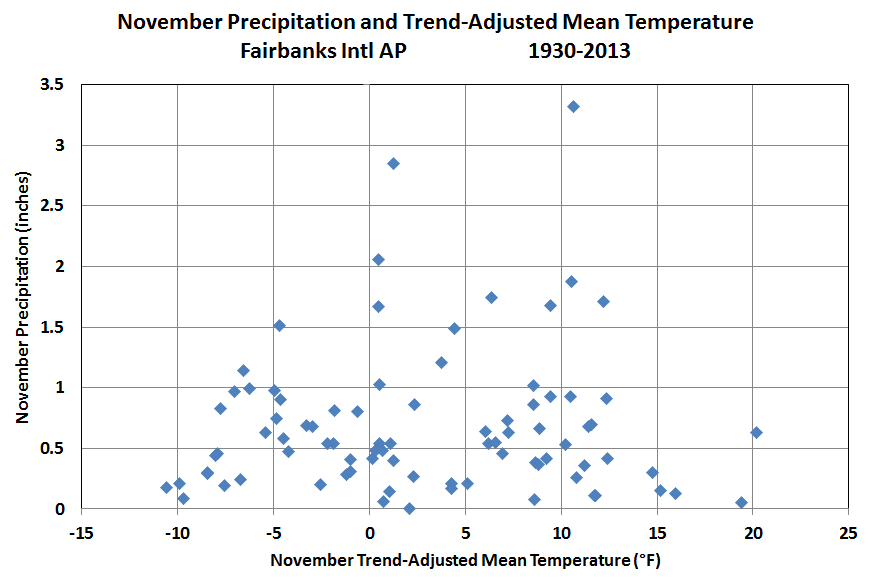 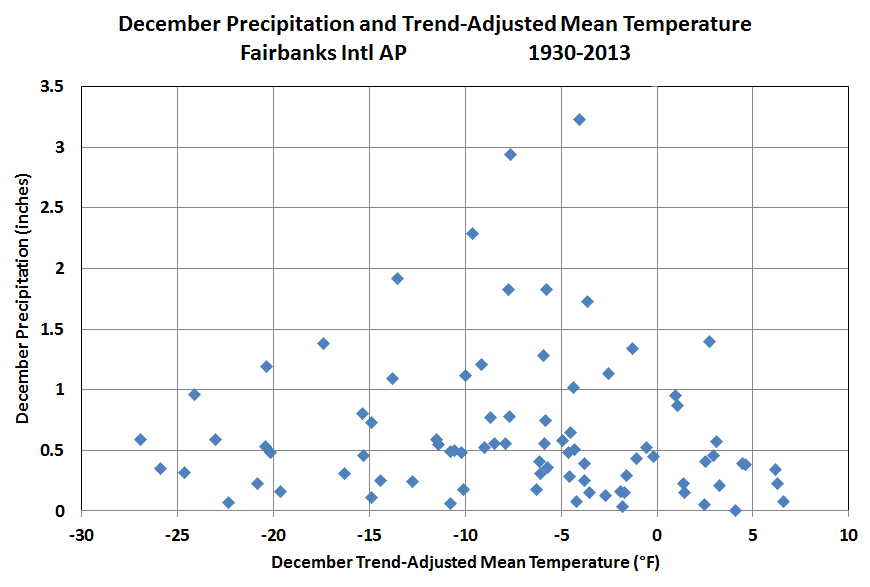 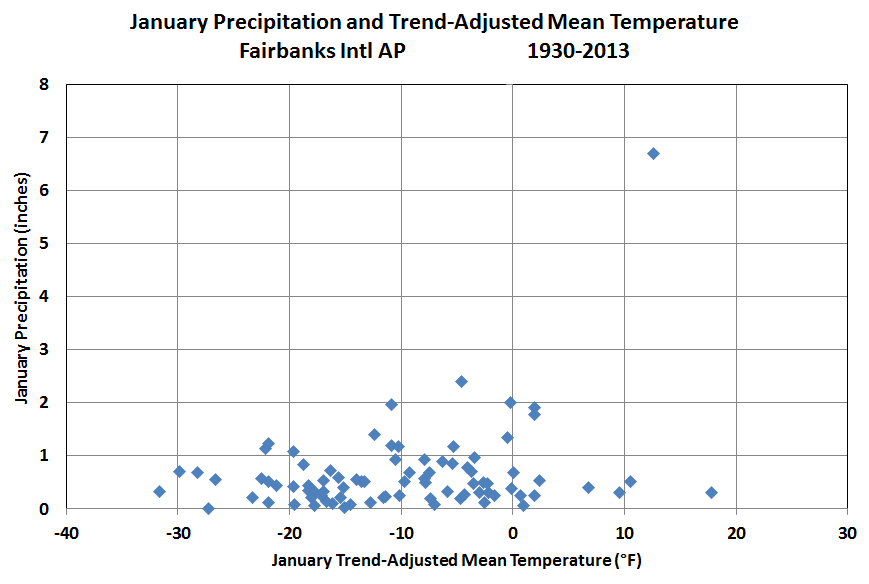 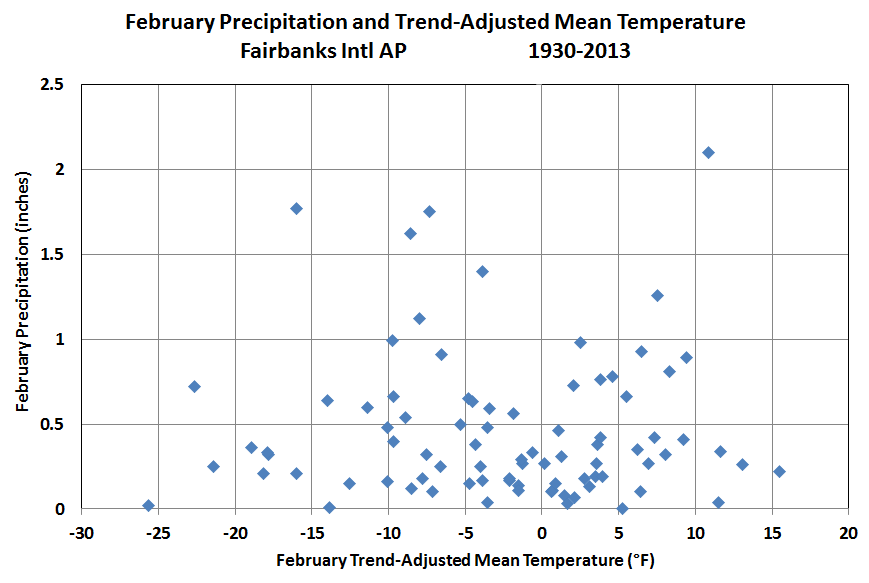 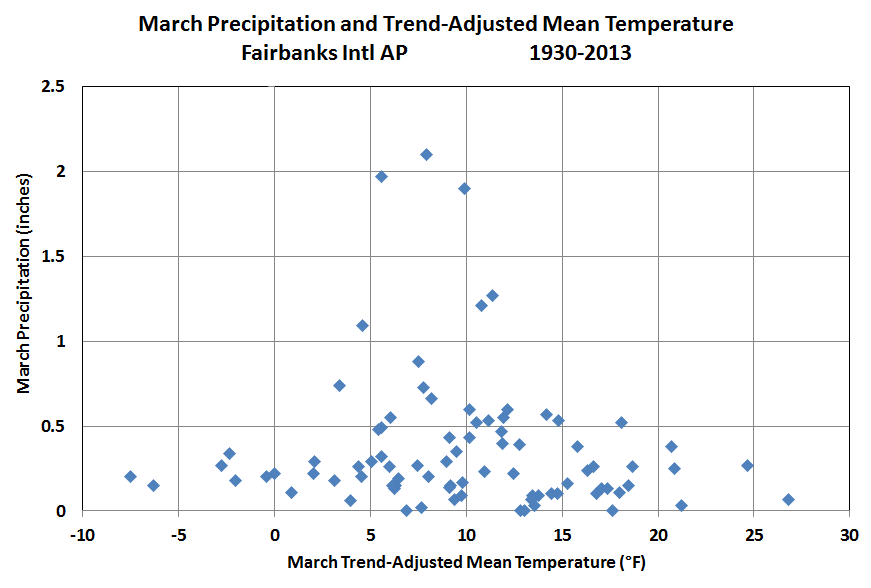 Posted by Richard James at 6:04 AM