It was a week ago now that Fairbanks experienced its first day this winter with an official (midnight-to-midnight) high temperature below zero.  This was 32 days later than the long-term median of November 17 and was also the second latest on record after 2002 (December 21).  The chilly conditions also ended a 31-day sequence of days that saw a higher maximum temperature than indicated by the NWS forecast from the previous morning.  So far in December, the NWS day-1 high temperature forecasts are averaging 7.7 °F too cold at Fairbanks airport.  We previously discussed this puzzling cold bias in the NWS temperature forecasts here and here.

To look at this issue a little more closely, I obtained the archive of MOS (Model Output Statistics) computer forecasts since 2000; these are purely statistical forecasts with no subjective modification by a human forecaster.  The MOS forecasts often serve as a first guess for a human forecast, and are undoubtedly a key component of the NWS forecast process.  As the chart below shows, the NWS day-1 high temperature forecasts follow the MOS numbers quite closely, although the NWS temperatures average 2.7 °F higher than MOS.  Note that the diagonal line shows the 1:1 (perfect match) line, not the best-fit line. 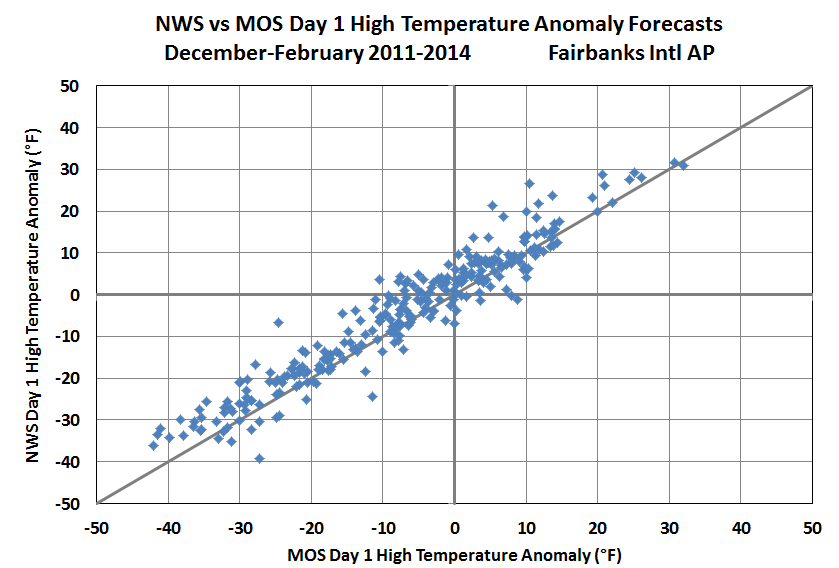 The systematic difference between the two sets of forecasts reveals that the day-1 MOS bias is even greater than the NWS bias, i.e. the NWS forecasters are removing part of the cold bias from the MOS values.  However, there is a nuance here that I realized when reading the MOS documentation.  The MOS high temperature forecasts are valid for the "daytime" period 7am - 7pm local standard time, and this means that it is not appropriate to use the midnight-to-midnight maximum temperatures for verification.  On average (2000-2014), the Fairbanks midnight-to-midnight maximum is 2.6 °F higher than the 7am-7pm maximum in December through February, because the 24-hour period has several hours either side of the "daytime" period in which the temperature can be higher (and this often happens with little solar heating in deep winter).

The bias of the MOS forecasts each winter since 2000-2001 is shown in the chart below, both for the midnight-to-midnight verification and the (correct) 7am-7pm verification.  The red diamonds indicate the mean winter temperature anomaly, which we expect to show some inverse relation to the bias.  We see that the MOS forecasts were actually too warm back in the winters of 2003-4 through 2005-6, but since then the cold bias has been persistent even when using the correct "daytime" verification. 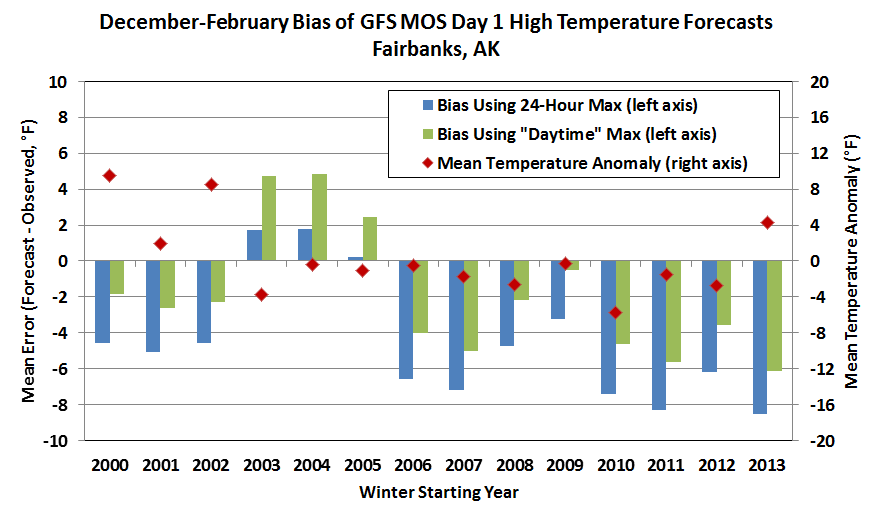 An interesting conclusion we can draw from the recent MOS cold bias is that recent winters have seen a different statistical relationship between the airport temperatures and the GFS model predictors than during the MOS development (fitting) period.  The MOS regression equations for temperature were last updated in March 2010, but this seems to have made things worse as the cold bias was quite notable in the subsequent winter despite colder than normal temperatures.  As it happens, the next MOS update is scheduled to occur on January 14, 2015, in tandem with a major upgrade to the GFS model itself; so it will be very interesting to see if the MOS forecast bias is reduced at that time.  If it is, then it's likely that the NWS forecasts will also see sudden improvement.