Mean daily temperatures in Fairbanks have been almost constantly above normal since the beginning of November, and the PDO phase has become strongly positive (see charts below).  Given the recent PDO behavior, the persistence of unusual warmth is no surprise, as we discussed in a post on November 27. 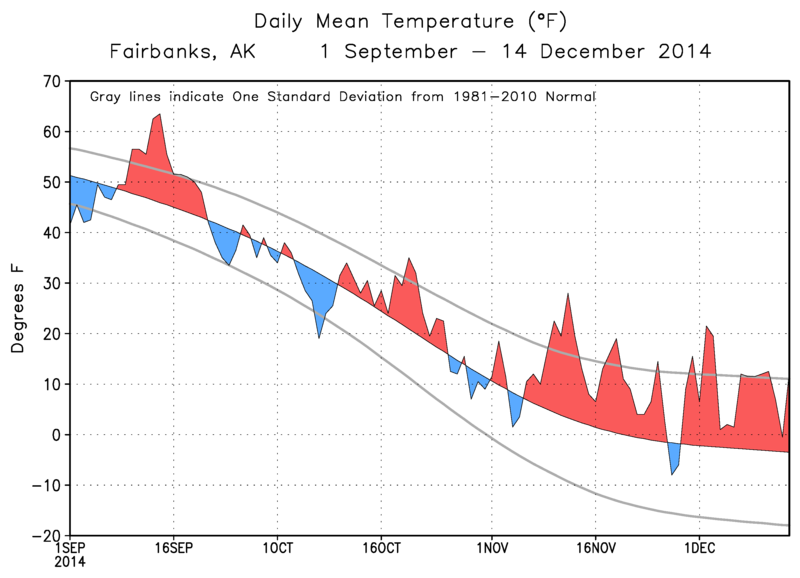 I thought it would be interesting to look in a bit more detail at the seasonal variations in the PDO influence on Fairbanks temperatures - for example, does the PDO influence peak in December, or is it equally large at other times of the year?

To address this question, I first looked at monthly data and examined the outcome in months for which the PDO index was in the top or bottom quartile of the 1930-2013 historical distribution.  This gives a sample size of 21 on both ends of the PDO distribution.  The first chart below shows the percentage of months in which the Fairbanks temperature anomaly had the same sign as the PDO index, and the second chart shows the median monthly temperature anomalies as well as the 25th and 75th percentiles of the temperature anomalies.  Note that I used the "normal" for the entire history (1930-2013) and did not adjust for long-term trends. 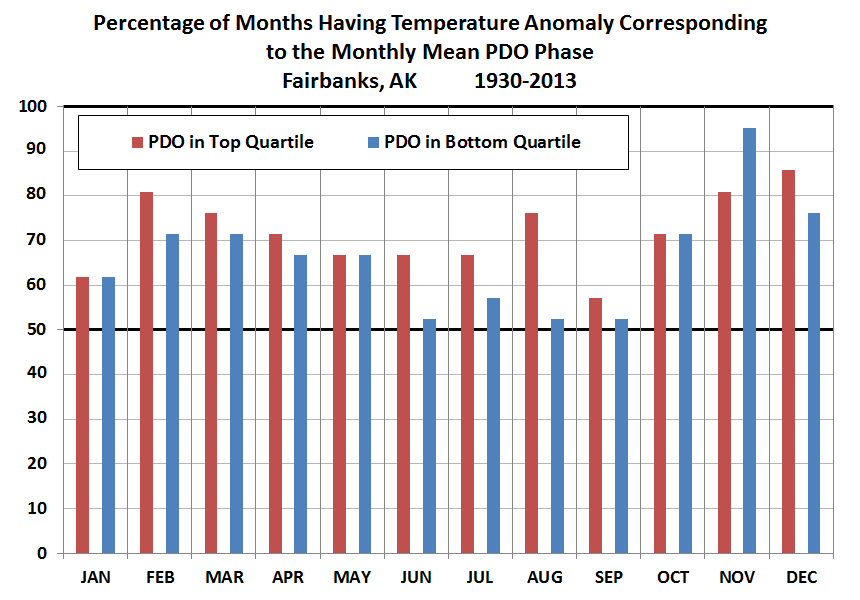 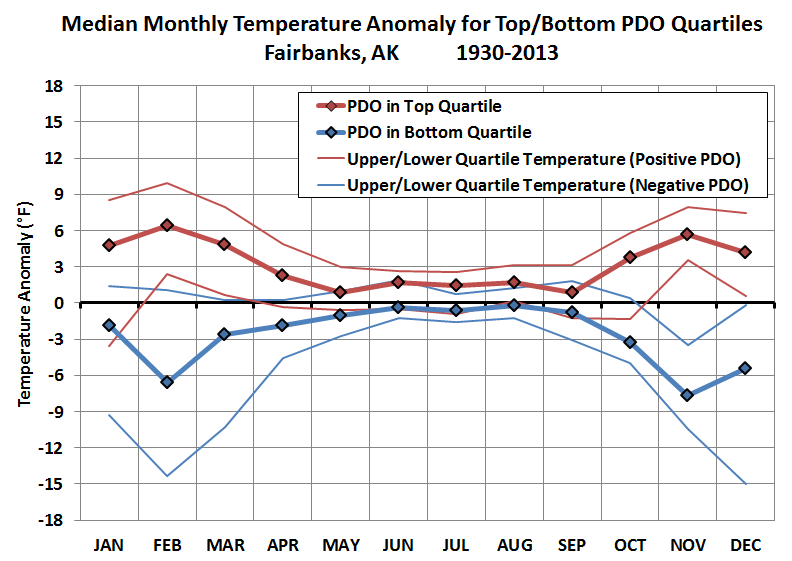 Another way of looking at the data is to examine the distribution of daily temperature anomalies during positive and negative PDO phases (see charts below).  Here I used the prior 30-year climatology of daily mean temperature to obtain the daily anomalies, and I ran the calculation over sliding 21-day windows throughout the year, with the PDO index interpolated from the monthly values to the center of each date window.  The purpose of doing this is to see if there are any notable sub-monthly features of the climate during positive or negative PDO phases. 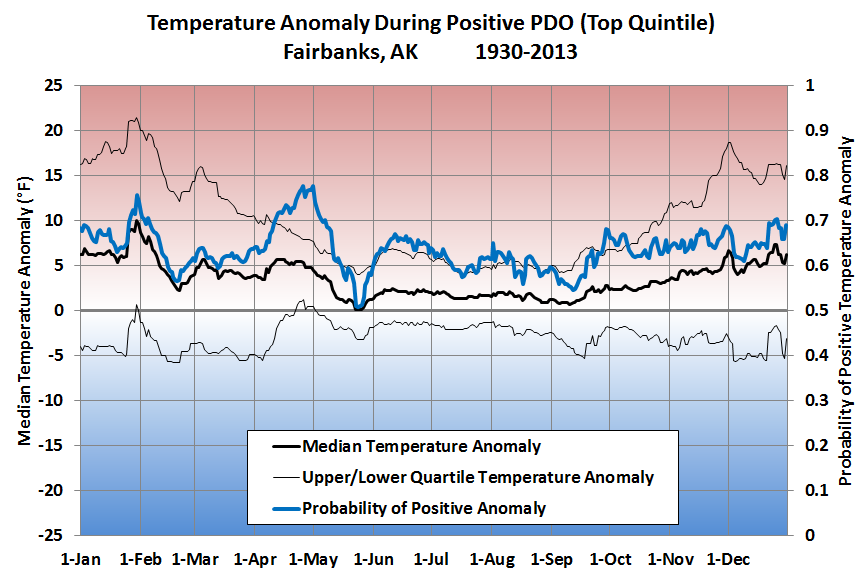 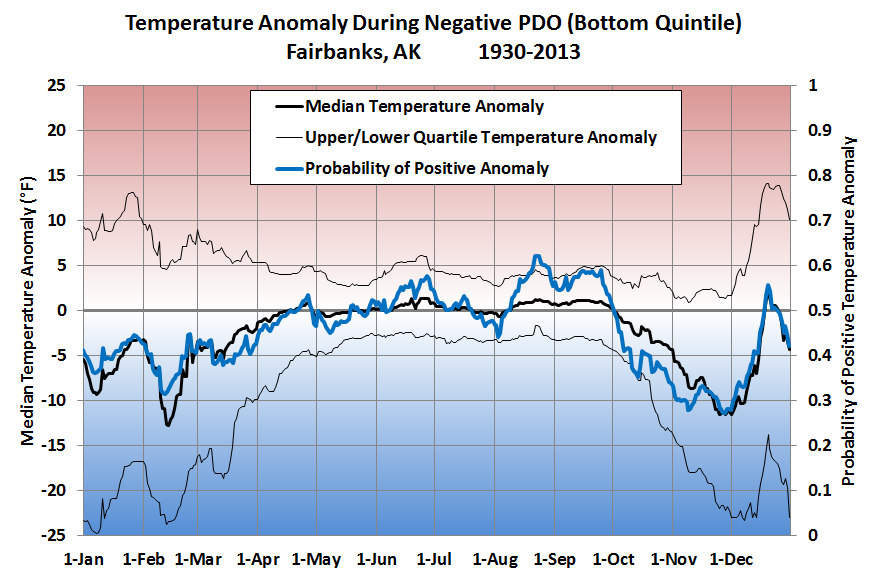 The charts above show quite a number of interesting features, but I'll only mention a few.  First, the response of daily Fairbanks temperature to the positive PDO phase seems to be relatively stable in winter (especially early winter) and does not show either a November peak or a January dip in PDO influence, as indicated by the monthly charts.  It's not necessarily surprising that daily probabilities behave very differently from monthly probabilities, but I'll have to think some more about possible explanations for the difference.  Interestingly the annual peak in probability for positive temperature anomalies with the positive PDO phase falls at the end of April, and the annual minimum is less than a month later; however, the median temperature is always above normal.

The daily chart for the negative PDO clearly shows the peak in negative PDO influence in November, but then there is a fascinating spike up in December, and the median temperature anomaly is above zero on about December 20.  It would be interesting to look at the historical years in more detail to see how this plays out; I suspect it is a reliable feature of the subseasonal evolution in the wake of a cold PDO-induced trough over Alaska in November.

It's also interesting to note that daily temperatures are more likely to be above normal than below normal in most of June, August, and September during the negative PDO phase.

Posted by Richard James at 6:24 AM