A couple of weeks ago I saw an article about birch tree health in Fairbanks, and a statement about the growing season caught my eye.  According to the article, the growing season has increased in length by 45% in the past century.  This struck me as a surprisingly large number, so of course I had to investigate.

The chart below shows the annual length of the growing season in Fairbanks, with the beginning and end of the season defined as the last and first occurrences of either a 32 °F frost or a 27 °F freeze.  Of course this is for the official Fairbanks climate station (the airport over most of the history); outlying areas will often have a significantly shorter growing season and may show different long-term trends.  The thin lines show the annual values, and the bold lines indicate the trailing 15-year medians. 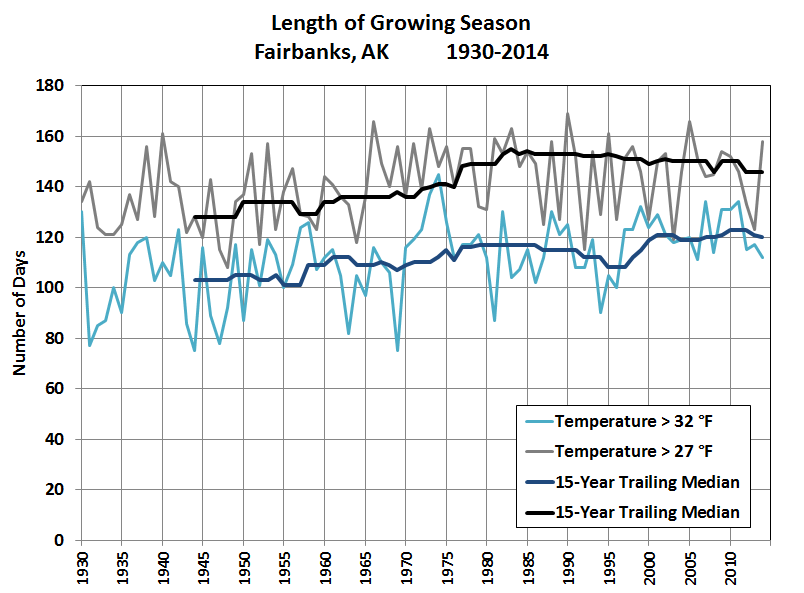 It's clear that the growing season has increased in length over the last 85 years, but according to the Fairbanks climate record it's not a 45% increase.  Taking the difference between the minimum and maximum 15-year median values, the greatest increase that we could claim would be 22 days (21%) for the 32 °F threshold or 26 days (20%) for the 27 °F threshold.  I think it's possible that the 45% number refers to the change in total growing degree days within the frost-free season, but I'll have to look at that another time.