Reader Gary asked about the role of cloud cover in helping to produce this winter's mild temperatures in Fairbanks.  This is an interesting question, because it turns out that cloud cover was highly variable through the winter and did not show a strong overall correlation to temperatures; this comes as a bit of a surprise at first glance.

The chart below shows the daily mean cloud cover from November through March, and this can be compared to the temperature cross-section that I showed before (see below).  Perhaps surprisingly, the sky condition was less cloudy than normal during several of the warmest periods aloft, such as mid-November, early January, and late March, while at other times warm conditions were observed together with clouds.  However, the cold spell of late January and early February was relatively clear, which is more what we would expect.  It seems clear (pun intended) that some of the most extreme warmth in winter 2014-2015 was brought about by strong ridging (high pressure) aloft, which causes subsidence and therefore clear skies; so we have a potential correlation between warmth aloft and clear skies, which is opposite to the usual association between cold conditions and clear skies in winter. 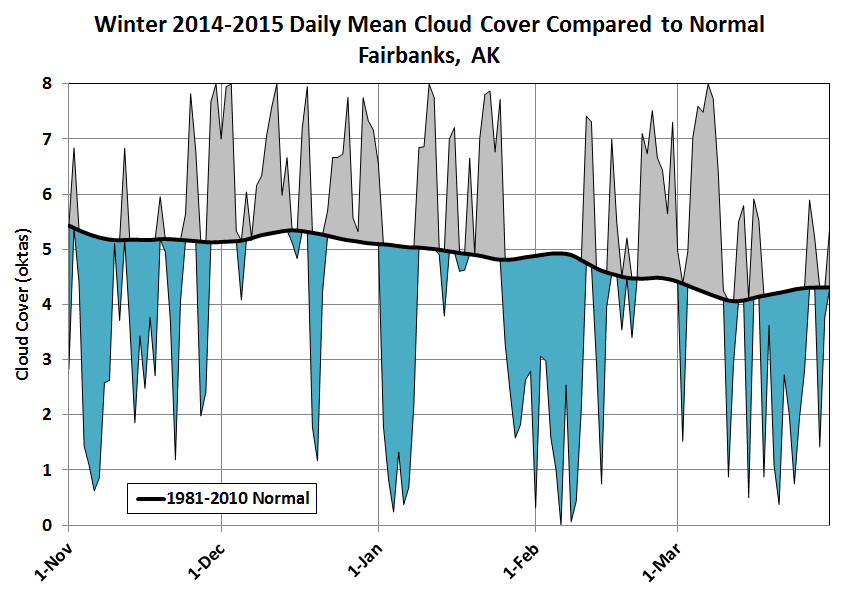 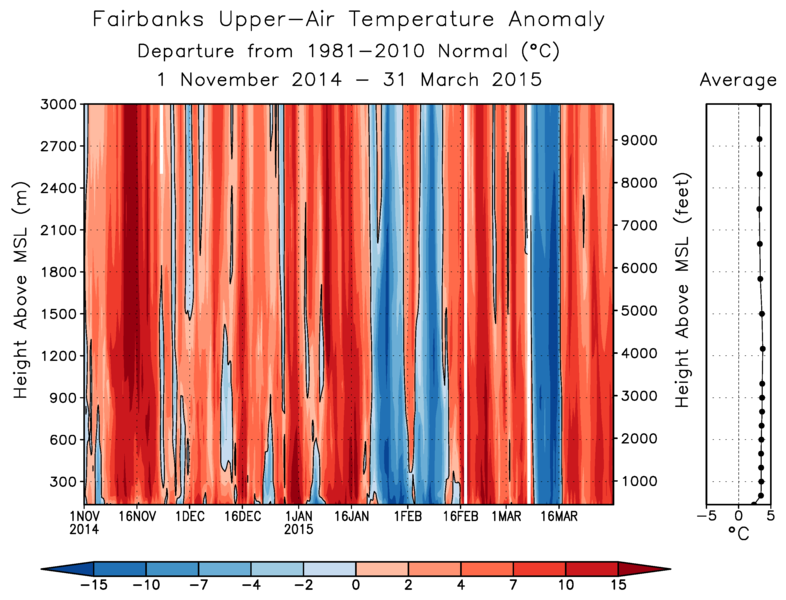 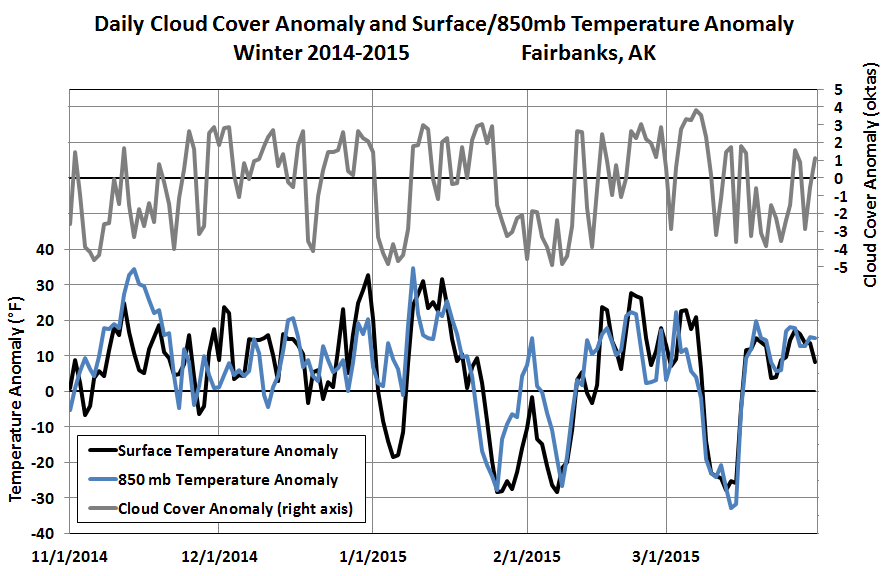 It's interesting to look at these relationships in the longer term data.  First, the chart below shows monthly mean values of surface temperature anomaly and cloud cover anomaly in winter months since 1998 (when the Fairbanks ASOS came online; note that I looked at this relationship last year over a longer history, but I'm now less confident in the long-term history of cloud cover observations.)  The relationship is quite weak and I've labeled November 2014, which was both warm and relatively clear, and January 2012, which was the coldest month in the ASOS era but was also more cloudy than normal. 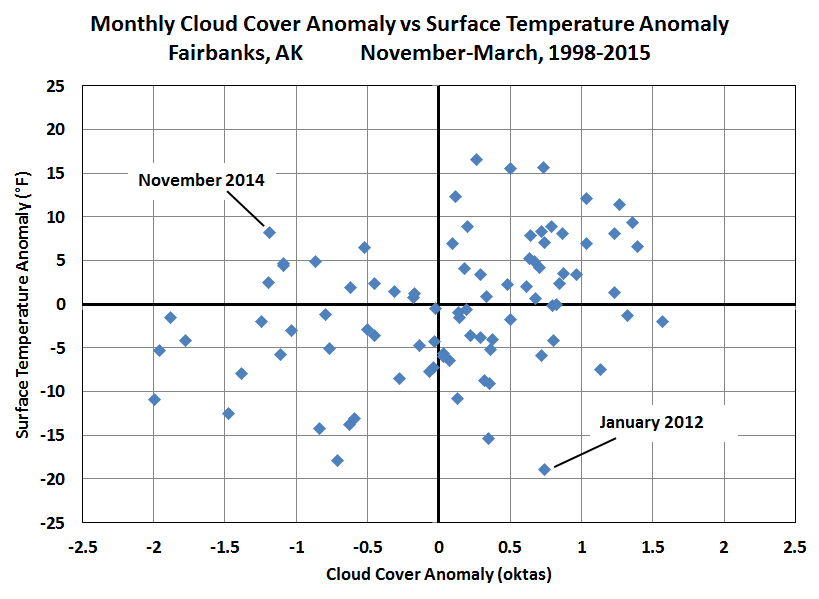 Looking at 850 mb temperatures rather than surface temperatures, there is very little if any relationship between cloud cover and temperature.  Some warm air masses are moist and cloudy, but others are clear because of subsidence aloft. 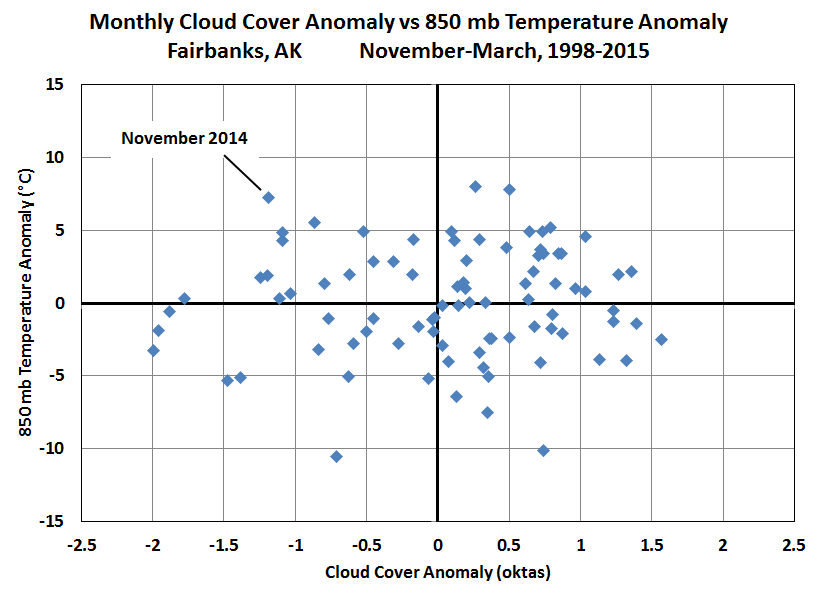 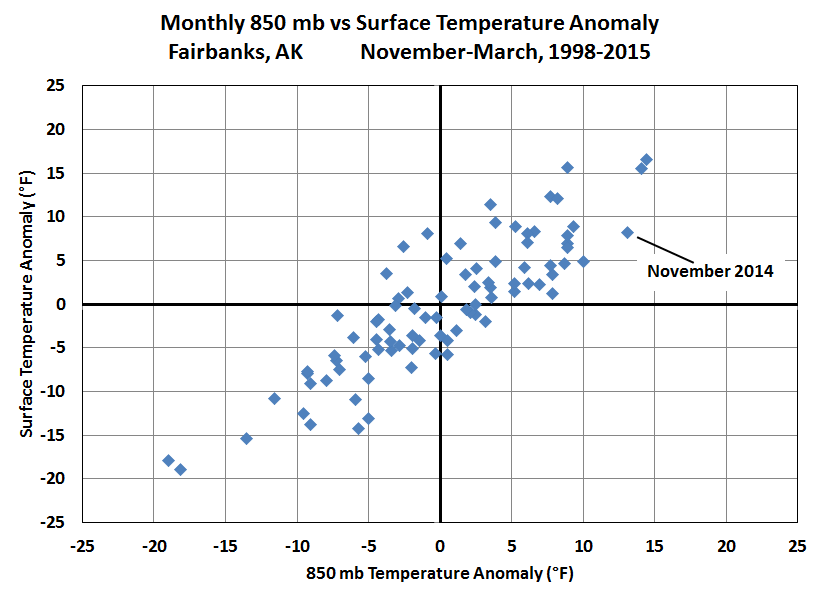 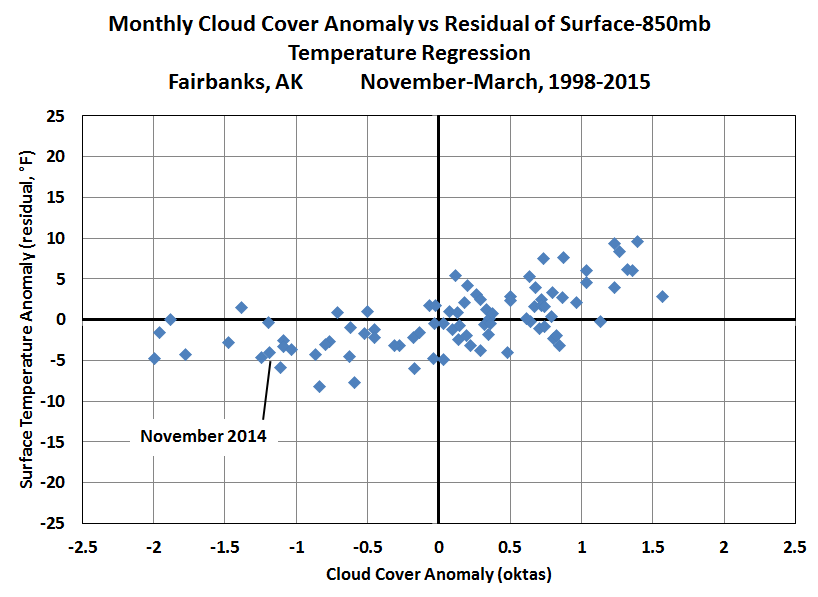 In answer to Gary's query, then, I think we can say that the overall warmth of the lower troposphere (caused by the persistent flow pattern) was the main reason for the mild winter in Fairbanks.  Cloud cover played a secondary role in affecting observed surface temperatures and did so by modulating the inversion strength.

Posted by Richard James at 8:45 AM