In what could scarcely be a greater contrast to the warmth of May (2nd warmest May on record in Fairbanks, but easily the warmest on record in terms of daily high temperatures), localized frost and snow heralded the arrival of June in the interior.  About an inch of snow accumulated yesterday in the vicinity of Delta Junction and Salcha (photos here), but snowflakes were confined to higher elevations in Fairbanks; a trace of snow was recorded at Keystone Ridge.  Here are some decidedly wintry-looking webcam shots from Delta Junction yesterday morning: 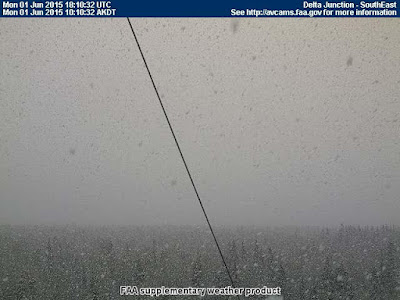 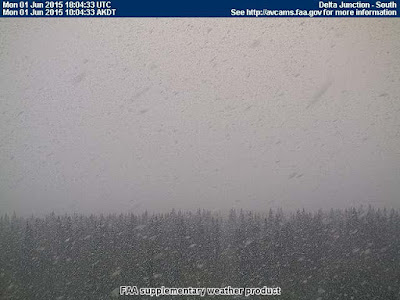 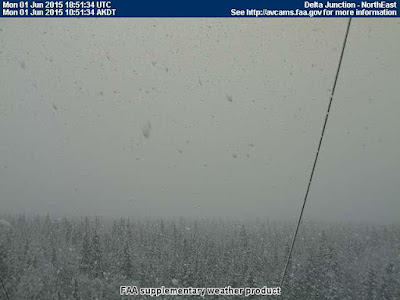 Looking back at historical data from the Big Delta site, snowfall amounts stopped being reported with the introduction of the ASOS in 1997, but from 1941-1997 the latest measurable snow on record was May 22, 1995 (1.2 inches reported).  Note the year: 1995, which was the year of the great May heatwave, as I noted in several recent posts.  Is it a coincidence that late snowfall occurred about 10 days after extreme early heat in both 1995 and 2015?  Not at all, I would argue: an amplified weather pattern lends itself to extremes in both directions.

The upper-level feature responsible for the cold and snow was a sharp trough with a small cut-off low embedded within it.  Here's the 500 mb height analysis from Environment Canada, valid for 3am AKST yesterday; the intense high at the dateline over the Arctic Ocean is a key blocking feature, and the trough over interior Alaska is evident, with a closed low analyzed just below the "L" label. 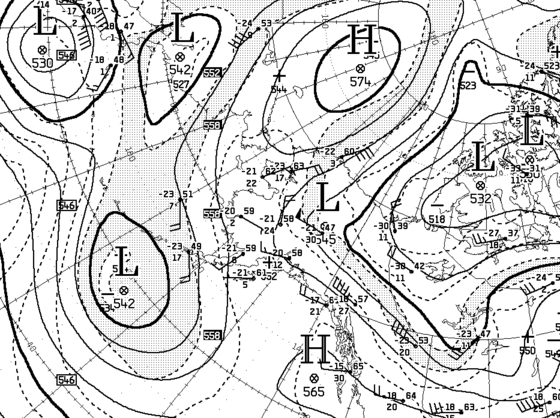 Now compare the 500 mb height analysis from May 22, 1995; the similarities are almost uncanny.

Here's a bit more detail on yesterday's 500 mb flow pattern, from a National Weather Service computer model forecast (maps valid for 3am and 9am AKST yesterday).  The orange/red blob near Fairbanks is a patch of strong cyclonic vorticity (i.e. counter-clockwise swirl) associated with the small closed low.

Finally, lest there be any doubt regarding the existence of the cyclonic "swirl", here's a simple radar animation from the Fairbanks NEXRAD yesterday morning.  The band of snow that affected Delta Junction becomes evident under the "Ft Greely" label.