The blocking high pressure system that we noted on Monday has weakened somewhat and migrated a little to the west and north, but continues to have a strong influence over Alaska's weather.  It is residing near the Gulf of Anadyr, as seen in this morning's 500 mb analysis (see below). 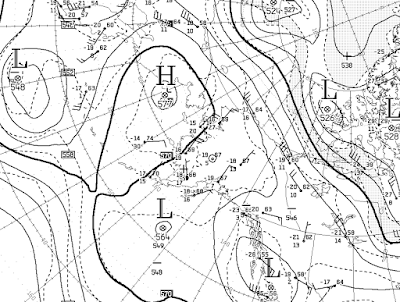 The location of the persistent blocking high is unusual, as the Bering Sea is a climatologically favored zone for low pressure; blocking highs are much more common over eastern Alaska and northwestern Canada at this time of year. 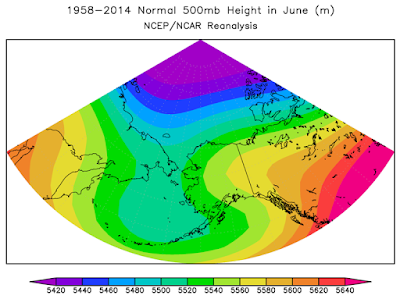 With stagnant flow aloft and clear skies, the seasonally intense solar radiation is generating very warm temperatures throughout the interior and north of Alaska.  Many locations across the western interior have reached at least 86 °F today, including McGrath, Tanana, Kaltag, and Huslia, and even the North Slope is hot, with at least 63 °F in Barrow and 70s in other locations.  The 63 °F at Barrow is warmer than any temperature observed throughout last summer; the highest temperature for 2014 was only 58 °F.

The chart below shows how persistent the unusual warmth has been in Fairbanks since late winter.  Unfortunately - from the point of view of fire weather - it looks like relief will not arrive soon.  The map below shows the forecast 500mb height anomaly from 3 different computer models for 7-10 days from now, and all three show a very similar pattern of continued above-normal heights (and thus above-normal temperature) over central Alaska. 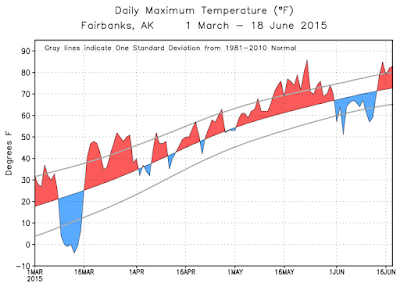 Update June 20: here's a map showing the climatological frequency of cut-off high pressure centers at 500 mb in June.  Northeastern Alaska and northwestern Canada lead the Northern Hemisphere in the frequency of these events, with an annualized rate of over 9 per year, which translates into nearly one per June on average.  This is also the highest frequency of any location in any month of the year.  However, the frequency is a lot lower over the Bering Sea. 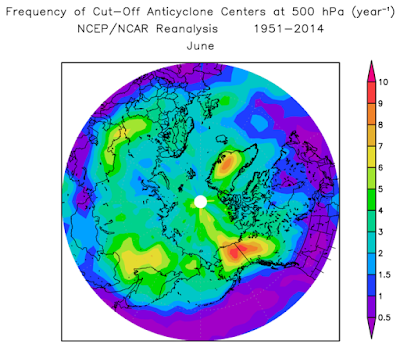