We're only about three weeks away from the summer peak in temperatures (less in some places), but various interior locations have seen freezes in the past few days despite the absence of night.  These include:

Here's a webcam shot from Tanana yesterday morning, when the temperature was just rising above freezing. 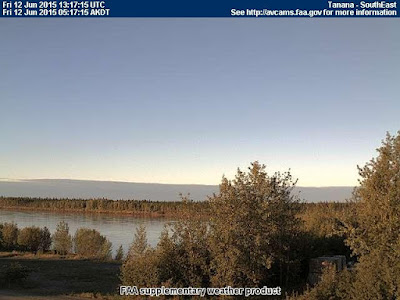 This is only the fourth time a June freeze has been observed in Bettles after the 10th of the month (data from 1951-present), although freezes have been observed in July before (most recently July 3, 2002).  And in Fairbanks, the first 12 days of June have been the coldest since 1963.  Looking only at daily maximum temperatures, it has been the coldest start to June since 1935!  However, this anomaly will be largely erased in the coming days as temperatures bounce back above normal.

The sharp transition from May's heat to early June's chill this year reminded me of the dramatic change in 2013 in the other direction: from a cold May to a very hot June.  Is it possible that May and June temperature anomalies are inversely correlated?  To address this I calculated the correlation between mean temperature anomalies in consecutive months for Fairbanks - see the chart below.  There has been a very tiny inverse correlation between May and June temperatures over the period since 1977, but over the longer term the correlation was slightly positive; so this year's reversal is not a reflection of a consistent historical pattern in Fairbanks. 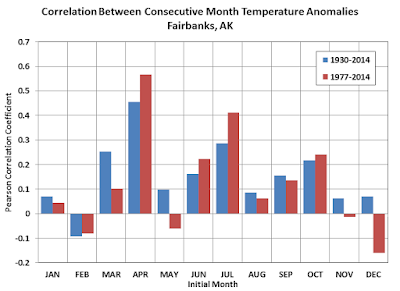 A more interesting result is the modestly positive correlation between April and May temperatures (as witnessed in 2013 and also this year) and to a lesser extent between July and August temperatures.

While I was looking at these numbers, I also examined the correlation between May and September mean temperatures, because I speculated recently that there might be a connection between May and September weather in Fairbanks.  There is a slight positive correlation over 1977-2014, but nothing to write home about (R=+0.34).  Looking at daily temperature data, the chart below shows the number of days in each May and September with a daily mean temperature anomaly of at least 2 standard deviations from normal (cold or warm).  1992 and 1995 obviously stand out, which is what drew me to this hypothesis, but there doesn't appear to be a robust connection between May and September frequency of extremes over the long-term history.  The 1990's were an interesting time with persistent El Niño anomalies in the tropical Pacific, so that could explain the 1992 and 1995 patterns.  (As an aside, the Pacific pattern is similar this year, leading to record rains in the central U.S. (recall the 1993 floods), so I wonder if September will show something unusual this year.) 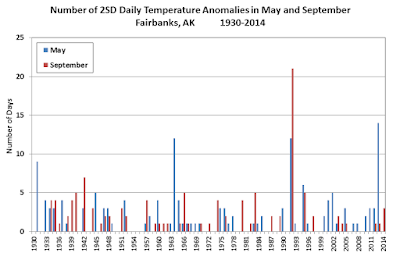