Extreme warmth has enveloped the North Slope in the past couple of days, rivaling past record events.  Here are a few highlights:

- 82F at Deadhorse Airport, and 80F at the new Deadhorse CRN site.  According to the NWS, this is a new all-time record in the 20-year history at Deadhorse, although my data shows 82F on August 5, 1999.  Also, observations from Prudhoe Bay list 83F on two occasions, including June 21, 1991.  The Prudhoe Bay site was a few miles closer to the coast and thus generally cooler, so I think it's safe to say this is not an all-time record for the general area.

- 73F at Wainwright airport.  This is a record high temperature for June (but historical data are missing from 1969-1998).

Here's this morning's uncharacteristically sunny scene from the UAF sea ice cam in Barrow.  The temperature is back in the 30s now that the wind has gone around to the west. 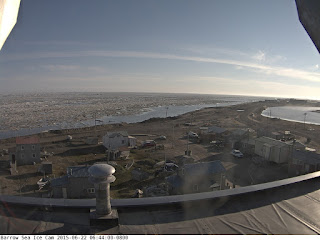 Posted by Richard James at 7:29 AM