There's been considerable news coverage of the woeful state of Arctic sea ice this year, but it's worth posting an update on this anyway.  First off, a caveat: a critical U.S. satellite sensor failed last month, forcing a hasty, unplanned transition to a newer satellite to maintain the U.S. sea ice monitoring program.  Read about it here.  The NSIDC is showing current data from the new satellite, but it has not undergone a careful calibration process and is considered provisional.  That said, here's the latest time series of total Arctic sea ice extent; the sensor transition occurred on April 1, but there's no obvious discontinuity at that time. 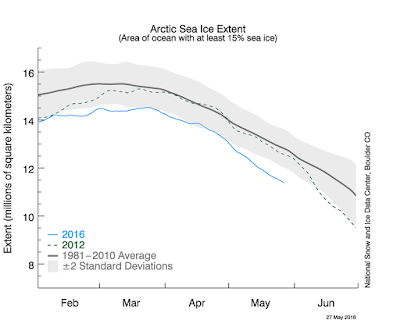 If the new satellite data are to be trusted, sea ice has retreated rapidly this month and now sits far below the 1981-2010 normal; it looks like the anomaly is between 3 and 4 standard deviations, which is huge.  The previous record lowest extent was observed in (September) 2012 and this year's ice is far less extensive than 2012 at this date.  This doesn't mean 2016 is guaranteed to see a new record minimum, but I'd guess the seasonal rate of melt would have to be remarkably slow from here on out to avoid a new record.

Here's a similar figure from the Danish Meteorological Institute; they are using the same satellite data as NSIDC, so it's not surprising the charts look similar. 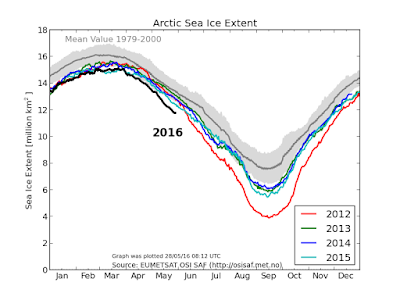 The latest map of Arctic sea ice shows big deficits compared to normal in the Barents Sea and along the east coast of Greenland, and of course sea ice is still well below normal in the Bering Sea.  Remarkably there is a large open region in the Beaufort Sea between Banks Island and Alaska, and another open area is evident in the northern part of Baffin Bay. 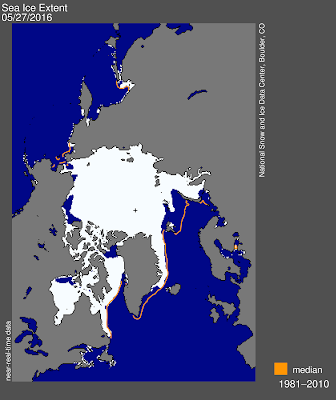 The PIOMAS model of Arctic sea ice shows that estimated ice volume grew uncharacteristically slowly in the first 4 months of the year and was far below normal at the end of April. 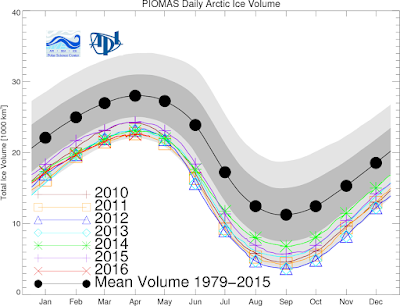 There won't be any prizes for guessing why ice growth was so anemic this winter; it was undoubtedly related to the extreme warmth around the Arctic basin.  To illustrate this, I created maps of monthly temperature anomaly from November through April, using both the station data and the gridded reanalysis (model) data - see below, and note that the color scales are the same (click to enlarge the maps).  I like to think of the left-hand maps as the "ground truth", as they're based on station measurements, but the reanalysis gives a generally credible picture of conditions over the Arctic ocean itself.


Note the amazingly strong and persistent warm anomaly in the northern Barents Sea, a direct result of the abnormal lack of sea ice.  This anomaly might be a bit overdone by the reanalysis model, but perhaps not by much.  There is an observatory on one of the islands in Franz Josef Land, and their mean November-March temperature was 12.4°F, compared to an estimated 1981-2010 normal of -6.6°F, for a 5-month mean anomaly of +19°F.  (This station doesn't show up on the maps because I required 28 years of data to calculate the normals, but this station only had 24.)

Finally here's the ECMWF model-estimated 2m temperature north of 80°N so far this year, courtesy of the Danish Meteorological Institute.  It would appear that not a single day has been cooler than the 1958-2002 normal. 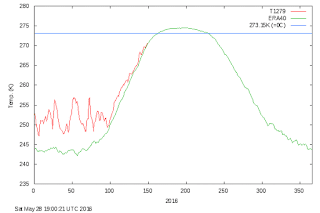