The National Interagency Fire Center in Boise released an updated national wildfire outlook today, and it contains a modest dose of good news for Alaska: the fire potential remains "normal" for the summer months throughout the entire state.  Last month's forecast had an elevated risk of fire in May for the south-central region, but no departure from normal is predicted for the rest of the season.

So far only 5700 acres have burned in Alaska this year, but of course significant fire activity doesn't usually kick in until June.  Last year the fire acreage was only 6400 acres on May 29, but the end of June and beginning of July were awful.  The record fire year of 2004 had even lower (almost zero) fire acreage at the beginning of June.  In contrast, 2014 was bad in May (almost 200,000 acres) but the rest of the season was quiet.

Here's the link to today's report:

The absence of an above-normal risk forecast seems a little surprising in view of the extremely warm spring experienced across Alaska together with the CPC forecast for continued abnormal warmth statewide this summer.  Perhaps the forecasters have taken note of the shift to a wetter pattern in May and, in the past couple of weeks, relatively cooler conditions as well. 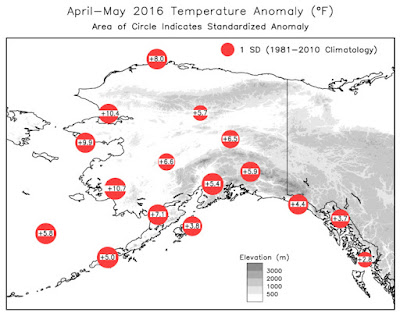 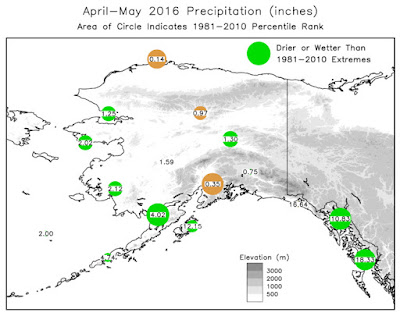