NOAA's Climate Prediction Center released their new forecast for summer (June through August) today, and the temperature outlook looks much as expected for Alaska: a warm tilt throughout, with the probability of significantly above-normal (upper tercile) temperatures greater than 50% for approximately the southern half of the state.

There is also an enhanced probability of a wet summer in the northwestern half; the CPC forecasters cite "anomalously open sea ice and warmer-than average ocean temperatures" as the likely cause.

The forecast for June temperatures is nearly the same as the summer forecast, except with a higher chance of warmth in the south; the continued strongly positive PDO phase is no doubt the main rationale for this forecast.  Wet conditions appear relatively likely across southwestern Alaska, and this is based on a consensus of computer models.

Here's a recent sea surface temperature map, showing both the positive PDO pattern and also the demise of El Niño - note the thin band of below-normal temperatures now evident along the equator in the eastern Pacific Ocean. 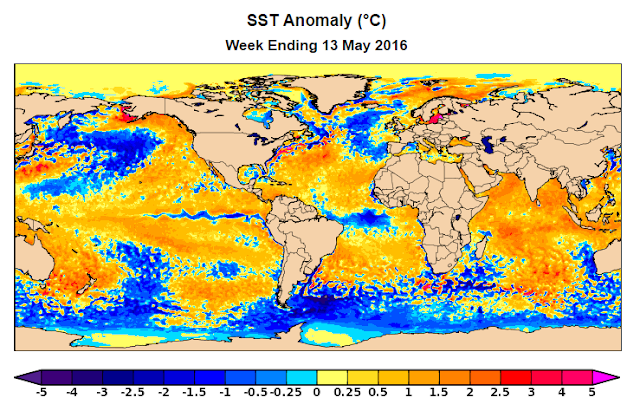 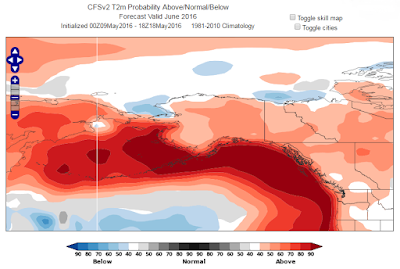 There's virtually no signal for June precipitation anomalies across the state: 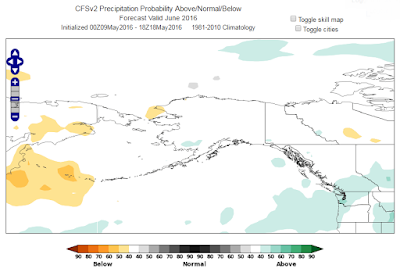 The summer (JJA) forecast looks quite similar to CPC's forecast, except that CPC has wisely (in my opinion) ignored the Arctic cold anomaly that appears to be related to the CFSv2 sea ice forecast. 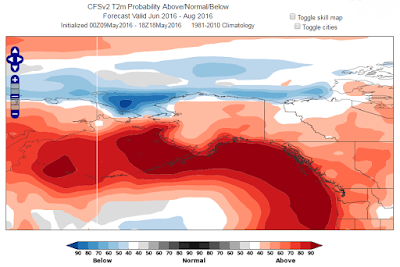 There's a little more of a wet signal for the three-month period: 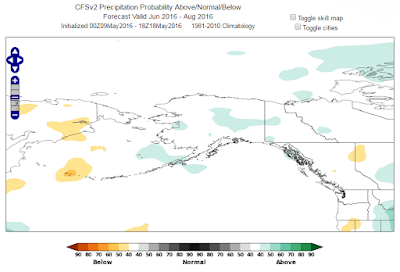 The other day I showed an analog forecast based on the late winter PDO phase, suggesting that summer might not be all that warm across interior and southern Alaska.  Reader Eric asked if the phase of ENSO was related to the patterns that emerged in the analog years, and it appears the answer is yes.  The map below shows the 5 (out of 10) years that had the strongest El Niño conditions in February through April (although El Niño was only truly strong in 3 of the years); there is only a weak cool signal over central Alaska. 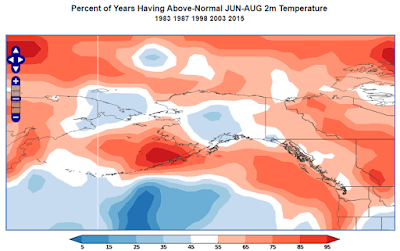 Contrast this result with the map below for the 5 years with the weakest El Niño conditions in February through April; 3 of these years had a near-neutral ENSO phase (the other 2 were weak El Niño's).  In this case the summer cold signal is much stronger; so it appears that the cool summer scenario is more likely when a strongly positive PDO occurs in late winter without a strong El Niño; and that is certainly not what has happened this year. 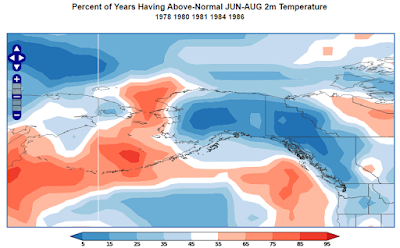