The first freeze of the season occurred at Fairbanks airport on Thursday morning (September 8), and Saturday also saw freezing conditions.  This is nothing unusual compared to the long-term climatology, of course, but it's on the early side of what has been observed in the past couple of decades.  Four of the last five years have now had a freeze by September 10 at the normally warmer airport location.

Other locations in the interior have been much colder; the Goldstream valley observers reported 21°F, the Salcha RAWS measured 17°F, and a very chilly 12°F was reported from the Chalkyitsik RAWS on September 7 and 8.  The Chalkyitsik RAWS is located on the Yukon Flats about 25 miles east of Fort Yukon, half way between Fort Yukon and the village of Chalkyitsik itself.  Looking at the historical data from the site, there's no particular reason to doubt that it really got this cold last week; back in early September of 2004, when a long sequence of cold nights occurred across the interior, the Chalkyitsik RAWS dropped into the single digits Fahrenheit on 5 consecutive nights from September 6-10.  The chart below compares the hourly temperatures in the September 3-10 period from 2004 and this year. 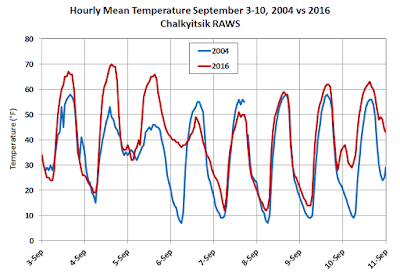 These remarkably chilly conditions at the Chalkyitsik RAWS led me to look more broadly at data from this site and also from the similarly-placed automated observing site near Beaver.  The Beaver RAWS is located on Beaver Creek about half way between Beaver (on the Yukon River) and Birch Creek to the east.  Both the Beaver RAWS and the Chalkyitsik RAWS lie within the broad low-lying region of the Yukon Flats, and both sites are very cold in winter.  The Beaver RAWS site is slightly colder - and in fact based on NOAA's GHCN data, the Beaver RAWS has the lowest (year-round) average daily minimum temperature of any site in Alaska outside the North Slope.

The chart below shows the monthly means of daily minimum temperature at the Beaver RAWS and at Chicken, the latter being a notorious pole of cold.  The calculations are performed only for days with observed (not missing) data at both locations in the common period of record.  Chicken, being at an elevation of 1800', has colder nights in summer, but Beaver Creek is colder in November, March, and April.  The overall difference is only a tenth of a degree Fahrenheit and thus not significant, but nevertheless the Beaver RAWS tops the list for "nighttime" (daily minimum) cold in interior Alaska.  Note that I haven't analyzed daily maximum or daily mean temperatures, because RAWS sites are known to have a warm bias on sunny days with light winds, owing to inadequate ventilation of the thermometer. 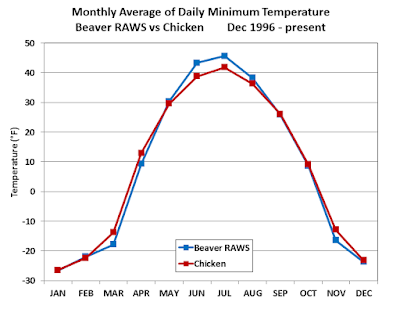 The most striking aspect of the Beaver Creek cold may be the very rapid drop in minimum temperatures in late summer and early autumn, before snow is typically on the ground.  From July to September, the average daily low temperature drops more rapidly at the Beaver RAWS than any other site in Alaska (including the North Slope).  Other locations, mostly at higher elevation, are colder than Beaver Creek in September, but none sees the same rapid onset of cold nights as summer wanes.

For example, consider that the Beaver RAWS has seen temperatures in the teens Fahrenheit in 6 of 26 Augusts with complete data, including 13°F in August 1996 and 16°F in August 2013; the average August brings at least one night with a low of 22°F.  And yet, a hard freeze is unusual in July, as only 30% of years reach 32°F in July; the Goldstream valley of Fairbanks does better than that.

Readers can follow the hourly data from the Chalkyitsik and Beaver RAWS at:

Posted by Richard James at 5:37 AM