Snowflakes arrived in Fairbanks yesterday morning for the first time this season, and the airport reported an hour of snowfall this morning before it changed over to rain; but there was no measurable accumulation.  It's a different story in the hills above Fairbanks, as evidenced by the webcam view from Cleary Summit on the Steese Highway about 20 miles out of town (elevation 2233'). 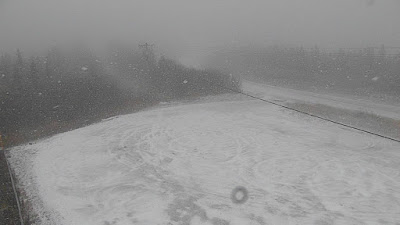 Snow also accumulated for a while earlier today in more northerly parts of the interior, including Bettles and Allakaket. 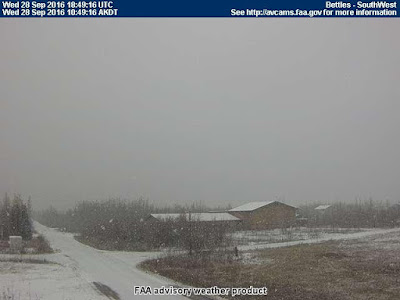 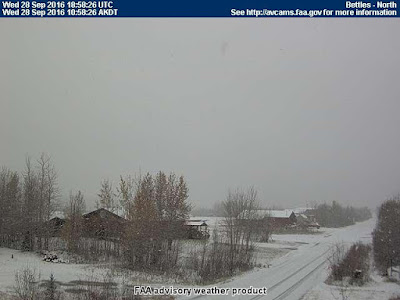 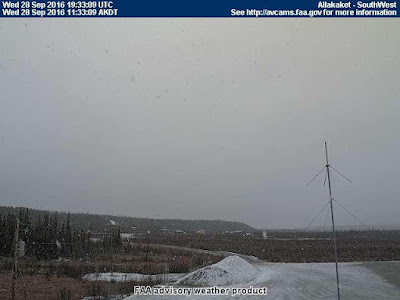 Farther west, at Shungnak on the Kobuk River, the scene looked quite wintry - although much warmer air has moved in this afternoon. 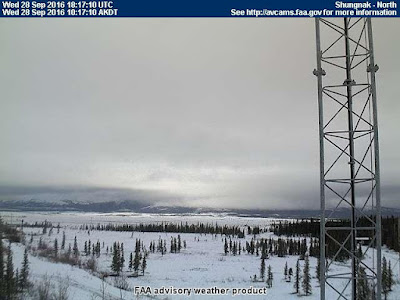 Last year I created a chart to show the history of first and last dates for wintry weather phenomena in Fairbanks, and here's an update with a couple of tweaks (click for a larger version). 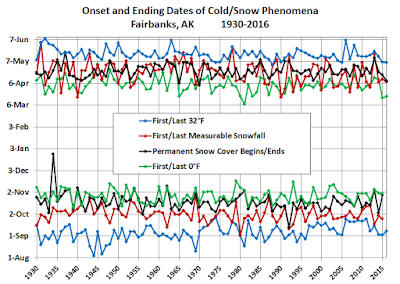 I ran a linear trend line through each of the 8 time series to see which of the long-term trends are statistically significant; here are the results with significance levels:

The first/last dates of measurable snow and of 0°F have not changed significantly over time.

The charts below show parallel results for Bettles and McGrath.  At Bettles, the only significant changes (over a shorter period of record) are that the first snowfall date has become earlier and the spring's last 0°F observation has become earlier.  It's interesting to note that the last 3 years have seen late freezes in Bettles in early summer, although meltout has been early. 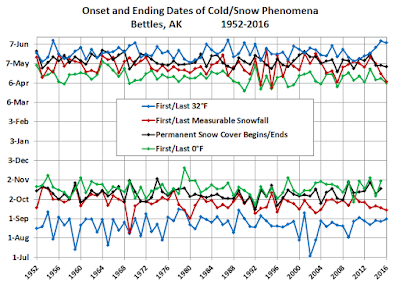 At McGrath the only statistically significant change (surprisingly) is that meltout has become earlier over the 75-year period of record. 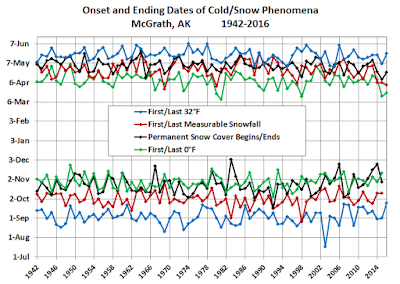 It's entertaining to look at the most extreme outlier dates for the 8 series shown on each chart, based on standardized departures from the mean.  For example, by far the most anomalous date at Fairbanks was the late arrival of the winter snowpack in 1934 - the year of the Brown Christmas.  The next most unusual date was the last 0°F measurement of spring 1964, which occurred when the temperature dropped to -1°F on May 9 - by far the latest sub-zero reading on record.  In 3rd place is the record late meltout (May 20) in 1937; this was related to the record 57" snow depth in February 1937.

For Bettles the single most unusual aspect of the data shown here is the record early snowfall of August 9, 1969 (2.6 inches).  This is not an observation error: it really happened; I should write about it some time.

The most anomalous event at McGrath was the mid-summer freeze of
2003: 31°F on July 17.  Other than this event, McGrath has never recorded 32°F or lower between June 7 and August 10.  Again, this was a real event, as temperatures were similar at nearby stations.