The extraordinary warmth across the Arctic basin in October prompted me to take a closer look at historical temperature data to get a sense for the magnitude of the recent anomalies.  I first did a search for stations with reasonably complete monthly data since 1971, and then I selected 19 sites that lie on or near the coast and also fall within 2000km of the Arctic Ocean's pole of inaccessibility (marked with an X below).  The spatial distribution of the 19 sites is reasonably even around the Arctic Ocean. 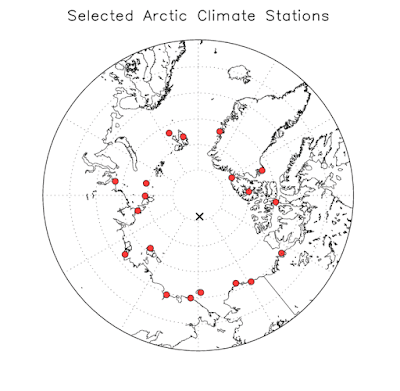 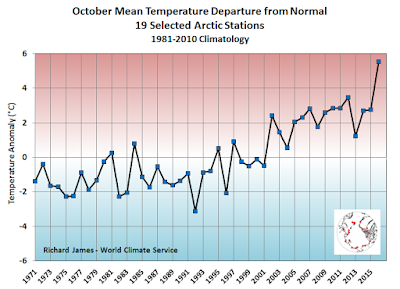 Looking at recent daily temperature anomalies for the same 19 stations, it is amazing to see that the warmth has become even more pronounced since the end of October; the 19-station mean anomaly reached +9.6°C last Thursday (November 3), and on Friday the coolest of the stations was 5.4°C warmer than normal.  In terms of standard deviations, Thursday's mean anomaly was the highest of any day from 1971-present. 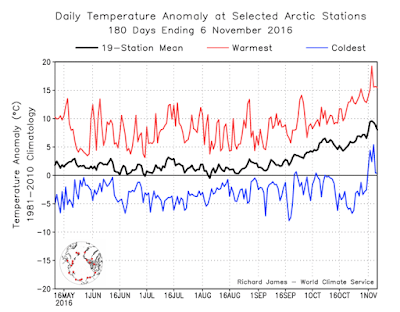 Here's the 19-station daily mean temperature for 2016 on an absolute scale rather than an anomaly scale.  Only 7 out of 311 days have been cooler than the 1981-2010 normal, and then only by a fraction of a degree. 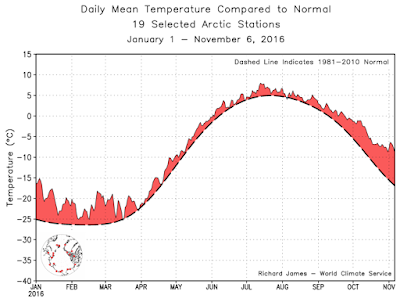