Temperatures below -30°F have been observed in a number of interior locations in the past week, and it seems it won't be long before -40° cold arrives in some areas.  [Update Sunday: the Norutak Lake RAWS recorded -40° this morning.]  The latest GFS MOS forecast shows -45°F for Arctic Village on Tuesday and -26°F in Fairbanks.  Here's a chart of the lowest temperatures observed each day across Alaska in the past couple of months.  The Chalkyitsik RAWS site was the location of the coldest temperature report on 17 of the 57 days shown here, although some of these were ties.  The next most frequent cold spot (7 days) has been Chicken. 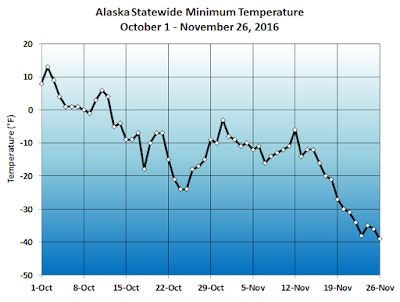 In a change of scene for Fairbanks, below-normal daily mean temperatures occurred for 7 consecutive days ending Thursday, the first such period since mid-July.  It's gratifying to see that my earlier speculation of a turn to colder conditions around November 19-21 worked out well - as we all know, even a blind squirrel finds a nut occasionally. 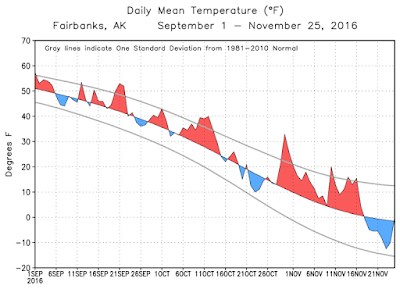 Looking again at the MJO phase, it's interesting to note that colder conditions tend to occur about 10 days after phase 7 even when the PDO phase is positive (as it is now) - see the graphic below.  (But note that the sample size is quite small for this analysis.)  Unusual warmth is much more likely to develop soon after an active MJO wave progresses through phases 1-3, which is where the MJO has been in the past week (second image below).  We might therefore expect warmth to return to Fairbanks rather soon, although the MJO anomaly is now fading and predictability may be lessened as a result.  In any case, the tropical MJO wave is only one of many influences on sub-seasonal climate variability in Alaska, so we wouldn't want to rely too heavily on it. 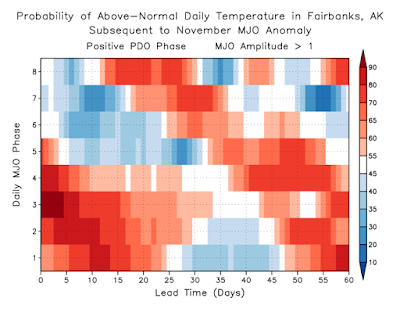 Posted by Richard James at 4:43 PM