Fairbanks has seen an unusual combination of low temperatures with significant snowfall since early yesterday; temperatures remained well below -10°F during the day yesterday in spite of snowfall rates that brought visibility down to 3/4 mile at times.  The day's liquid-equivalent precipitation was 0.29", which is easily the highest on record in January for a day with a high temperature below -10°F.  The chart below shows the outlier in comparison to the historical distribution of precipitation and daily high temperatures in January. 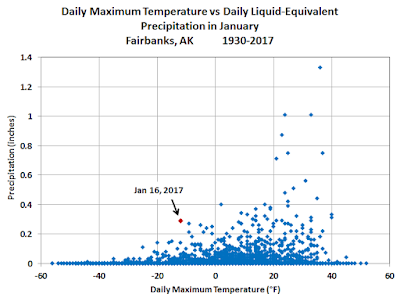 The 500mb analysis from yesterday afternoon helps reveal the reason for the unusual conditions: see below (click to enlarge).  The cold trough aloft is deeply entrenched over the western half of Alaska, and Fairbanks is under a zone of strong temperature gradient aloft with southerly flow; notice the tightly-packed dashed lines over the southern and eastern interior, denoting a tight gradient between very cold air over western Alaska and much warmer air to the east.  (The dashed lines indicate 1000-500mb thickness, a good measure of overall temperatures in the lower troposphere.)  Cold air is reaching Fairbanks from the base of the trough, but the frontal zone is proving a lifting mechanism to generate clouds and snow. 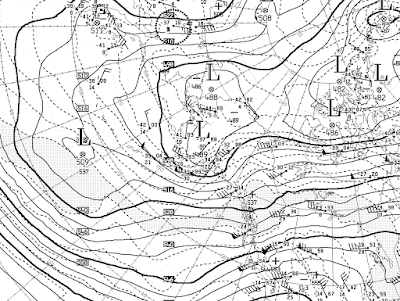 If and when the frontal zone shifts east and clouds clear out, temperatures will drop sharply in Fairbanks; most of the western interior is cold this morning. 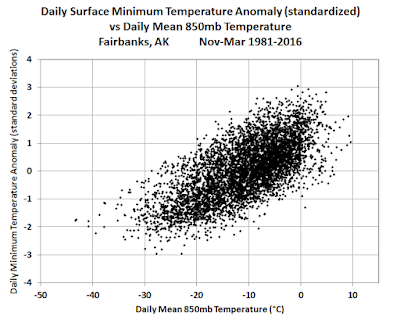 The decreased variability during cold spells is seen in the chart below, which shows the standard deviation of the daily surface temperature anomalies in categories of 850mb temperature.  The relationship is more noticeable for daily low temperatures than for high temperatures, which is why I used low temperatures in the scatter plot above.  The results certainly confirm reader Gary's comment that "with 850 mb temps forecast to be -30 or below there's not a lot of room for variance in cold at the surface"; and I think this is because troughs of very cold air aloft are not generally conducive to very large temperature inversions near the surface. 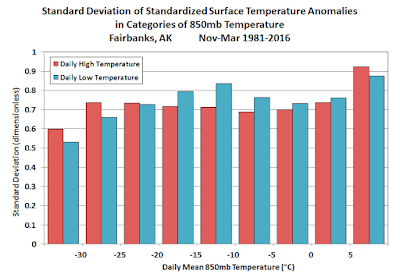 Posted by Richard James at 7:16 AM